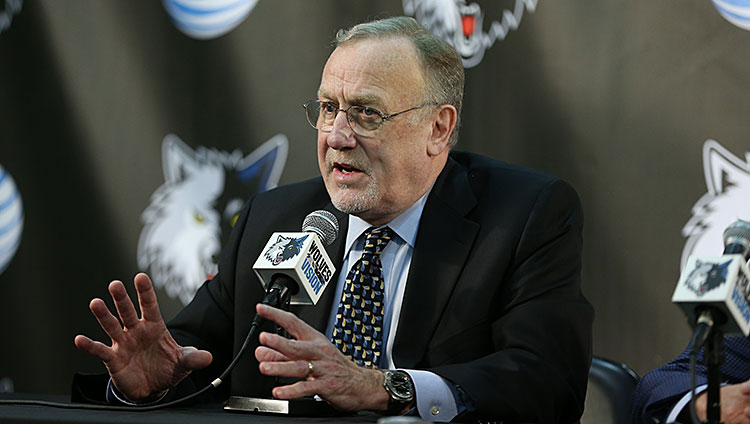 The press conference announcing Rick Adelman’s retirement from coaching was about as quiet and unassuming as the man himself. Multiple rows of chairs sat ready on the Timberwolves’ practice court inside the Target Center, but they were less than half full when president of basketball operations Flip Saunders and Adelman took the stage. On the court, Adelman was prone to outbursts of exasperation, palms upturned, pleading to the officials in defense of his players. Off the court, Adelman is careful and measured, but with a sharp, dry wit.

“When you coach a team, you coach the players you have,” he said in response to a question about what he would have done differently during his time in Minnesota. “But I would have probably tried to get LeBron. That would have been something that would have really helped.”

Adelman came to a Timberwolves team that won 15 and 17 games the two seasons prior to his arrival, and brought them up to 40 wins by the end of his three years — three years that saw season-ending injuries to two of the team’s three best players. But his final coaching stint will be regarded as something of a disappointment. Saunders and Adelman both focused on the growth of the team, while acknowledging that they came up short.

“What looks good on paper isn’t necessarily what reality is,” Adelman said. “What you can control is what you try to get out of your players. It’s like a scouting report. You say we’re going to play the pick-and-roll this way — everything looks great until you get into the game and then it doesn’t look so good sometimes. You always think you should have done something different. You’re always second-guessing yourself in this line of work.”

This is the curse of doing what you love, though. If you didn’t love it, you wouldn’t feel ceaselessly compelled to do it better. Saunders talked about how the team’s failures ate at Adelman and how he at times looked hollowed out down the stretch of this season. And although the coach rarely spoke directly about the health issues his wife, Mary Kay, began experiencing last season, that had to weigh on him as well.

“This job looks great to people from the outside, and it is a great opportunity to coach in the NBA for that long,” Adelman said. “But it’s tough. It affects you, it affects your family. You’re under the microscope. And nowadays it’s even worse because there’s so much with the Internet. It’s all-consuming now.”

The accolades, the success, and the failures aren’t the things he’ll carry with him into retirement, though. Much as Steve Nash said when discussing retirement, it’s the people. “It’s not just the team,” said Adelman. “It’s everybody around your team, from the trainer to the equipment guy to the film guys. It’s a special thing to go through because you are in it together and I think that’s what you’re probably going to miss more than anything else: that everyday camaraderie with those people.”

Adelman seemed to be at peace with the decision. And that might seem strange for someone who accomplished so much — eighth all time in coaching wins, ahead of Gregg Popovich and Red Auerbach — yet still never won a championship. Fans look at coaches and figure if they’re doing what they love, they should want to do it forever. We all want to do what we love, right?

But this idea that one could never exhaust his love for something stems from the belief that everyone has a calling. This can be comforting because it holds forth the promise that there is something out there that fits each of us, and it’s simply a matter of chancing upon the right thing and going with it.

The truth, though, is that the thing one loves can become especially destructive. “Flip just told me that I look a lot better,” Adelman joked. “You get caught up in it way too much. But it is your job every day, and not to have to worry about that or be there at quarter to six to talk to you guys: That’d be nice. Players sleep in, coaches don’t. It gets to be old after a while.”