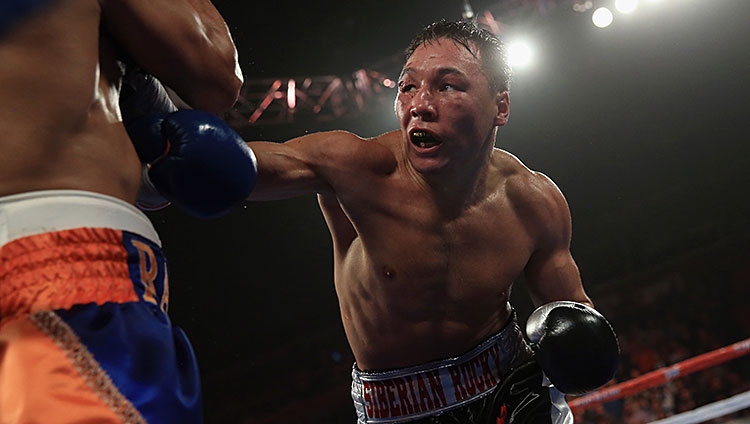 @jmmarquez_1 made a mistake trying to box a boxer like @Timbradleyjr , you have to break him morally and physically to win!

I had. A flattered smile spread across his face.

“That’s pretty much what it means,” he continued. “Before breaking a fighter physically, you have to break them morally.”

I thought: We’ll come back to it.

Provodnikov was in town to promote his title defense on June 14. (Call your cable provider, etc.) He had made camp at Tatiana, a Russian nightclub that serves shaved salami fastened to cucumber slices with toothpicks shaped like pirate swords. The weather outdoors was Siberian. The only souls walking the boardwalk were two Orthodox Jewish men and a fellow playing an accordion.

Provodnikov stood among a whirl of pushy Russian reporters and recited his life story. It has a surreal quality, like an old Pravda “official biography” that was written for a Punch-Out!! character. Provodnikov was born in Beryozovo, Siberia, in 1984. He described Beryozovo as an outpost with water on one side and forest on the other, and with a single boxing gym. In his youth, Provodnikov gained strength by swimming in icy waters. He snacked on raw moose meat. “I still do,” he said. “I eat a lot of frozen, raw moose liver. It’s very healthy.”

Provodnikov stands 5-foot-6, with spiky hair and a moon face. When he started boxing, someone dubbed him “Siberian Rocky.” His camp suggests that someone might have been Provodnikov himself — he can recite all the lines from the film. Siberian Rocky, like movie Rocky, got famous for a close loss. Last March, Provodnikov was cast as a tricky but highly beatable challenger for Timothy Bradley. Provodnikov stunned Bradley with big rights in the first two rounds. After losing some steam, he hit Bradley with left hooks and overhand rights in the 12th that put Bradley on the mat. Bradley got up, won a close decision, then went to the hospital. “We went out to eat!” said Provodnikov’s promoter, Artie Pelullo.

Bradley-Provodnikov was dubbed the 2013 “Fight of the Year,” a term boxing writers reserve for fights that aren’t total rip-offs. Provodnikov’s fights are never a rip-off. He fights like an earth mover, an encroacher on your space, always coming forward, eating shots, trying to lure you into opening a trajectory for his own. It’s not necessarily pretty — Provodnikov lacks the skill of boxing’s master craftsmen like Floyd Mayweather Jr. and Andre Ward, or even the refinement of fellow Russian-speaking sluggers Gennady Golovkin and Sergey Kovalev. But Provodnikov’s commitment to throwing bombs, rather than simply scoring, has made him a strangely noble side attraction. He likes to say, “I don’t say anything I don’t do.”

After Bradley, Provodnikov fought Mike Alvarado in October. Provodnikov said Alvarado was broken morally by the sixth round. I tried again: What does it mean to break someone morally?

“When a fighter knows his opponent is ready to do anything to win the fight … ” Provodnikov said. “When no matter what he does, what he tries, the fighter is always on him, always in front of him, and doesn’t stop, he just gets discouraged. That’s what it means.”

Before his bout with Provodnikov, Alvarado had never been knocked down. Provodnikov knocked him down twice in the eighth round. After the 10th, Alvarado didn’t get off his stool. He was reduced to moaning that he didn’t quit, his manager did it for him. When you’re debating that, you might say you’ve been broken morally. In the celebration that followed, Provodnikov asked his mother, Raisa, to join him in the ring. She hugged Provodnikov and wound up with his blood smeared on her cheek.

Siberian Rocky was now an HBO headliner, sought by Russian billionaire Mikhail Prokhorov, who owns the Nets, for a fight at Barclays Center. For an opponent, Provodnikov settled on Chris Algieri, a well-groomed 30-year-old from Long Island whom I found at Tatiana. “I think me and Provodnikov have similar approaches in what we do to our opponents — we break their will,” Algieri said. I noticed he didn’t say their morals. He continued, “I break them down as if we were playing chess and make them realize they can’t win.”

And Provodnikov? “You got a guy who’s always going to be coming at you,” Algieri said. “You got to be able to think a move ahead. I got to definitely be on my p’s and q’s in this matchup.”

Their joint press conference at Tatiana was dominated by a middle-aged Russian journalist, a stout woman with hair dyed the color of cinnamon gum, who rose and recited a question that began to feel, lengthwise, like a Dostoyevsky novel. Slimmed down: Would Provodnikov-Algieri be a proxy war for geopolitical standoffs like Putin-Obama in Crimea?

“I don’t want to get politics involved with this at all,” Provodnikov replied. The crowd applauded. By the time the answer had been translated and Algieri had added his two cents, there wasn’t time for any more questions.

Seeing Provodnikov in the flesh has the strange effect of transforming him from an aggressive mauler into a sympathetic figure. Here he was, looking smiley, thoughtful, eager to please every Russian reporter who wanted to film him pacing the boardwalk for B-roll. This isn’t the Provodnikov we see in fights, whose put-it-in-drive style leaves his upper cheeks swollen like balloons and his eyes nearly shut and cuts above them leaking blood. “It’s part of my character,” he explained. “It’s part of who I am and the way I fight. I don’t like to take the shots is the answer to your question. But I would rather take some extra shots and win the fight.”

Would he break Chris Algieri morally?

A quizzical look crossed Provodnikov’s face, as if he hadn’t considered the question. “Yes,” he finally said, “I think so.”