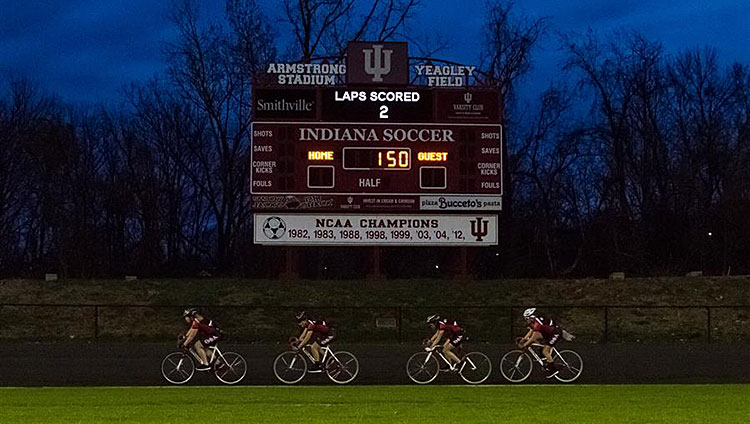 Witnessing an intramural bike race contested over 200 laps on a sooty, quarter-mile track sounds about as exciting as watching Scorsese characters not do cocaine. But not in Bloomington, Indiana. In Bloomington, it’s the most captivating spectacle ever.

“It’s billed as the world’s greatest college weekend,” says Indiana University alum Mark Cuban of the 64-year-old relay race known as the Little 500. “And it is.”

Two hours before the men’s race last Saturday (there’s a Friday afternoon women’s race as well), a lanky frat bro stands across the street from Alpha Epsilon Pi on Jordan Avenue, singing along to the Outfield’s “Your Love” at the top of his lungs. Further down, other houses blare southern rap and EDM as orange-shirted security sentries ward off uninvited revelers. At Delta Tau Delta, which won the Little 500 two years ago, alumni and sorority guests alike join the current brethren on the front lawn in a series of rambunctious chants.

Luke Momper is a Delt, but he’s not among the shouting throng. He’s already inside Bill Armstrong Stadium, making sure his Schwinn one-speed (all riders are given identical bikes to level the playing field) will get him through the race. Momper, from Fort Wayne, competes for IU’s cycling team, and has raced around a Colorado velodrome in the collegiate national championships. Yet even that doesn’t hold a candle to the Little 5.

“The Little 500 dwarfs anything cycling-related that we do,” Momper says. “Nowhere on a bike, outside of the Tour de France or some of these huge professional events, do you race in front of tens of thousands of fans. The atmosphere is insane. It’s like the Super Bowl for cycling. It casts a shadow on everything else we do, and it’s funny because it’s just one day.”

But unless you’re a rider, the Little 5 is actually more than just one day. More accurately, it’s approximately five days of nonstop partying, a late-April sprint down the homestretch with commencement (May 10) right around the corner.

“Everything just shuts down; classes are a second priority,” says Eddie Suarez, who graduated in 2013 but still lives in Bloomington, where he works for the record label Secretly Canadian. “Teachers are looked down upon if they give assignments that week. Seniors plan all of their classes around that whole week. I had one friend drop a class just because they had a test on that Friday before the 5. The campus is just buzzing. There’s a party every night.”

Suarez, a Theta Chi, never rode in the Little 5, but he sang “(Back Home Again in) Indiana” with his a cappella group, Another Round, on the infield during last year’s pre-race ceremonies. What transpires during that half-hour or so of pageantry — and during the two-hour race itself — closely mirrors what occurs during the Indy 500 auto race. There are pits, caution flags, and treacherous wrecks. There are rowdy fans, and a well-populated infield with stewards and cameramen perched in towers (Cuban’s AXS TV televises the proceedings). There are time trials that determine which team gets pole position, and who occupies the rows of three (33 teams, all told) behind them. There’s even the official Indy 500 pace car, a Camaro convertible, leading the riders along the track in the warmup laps before the race. 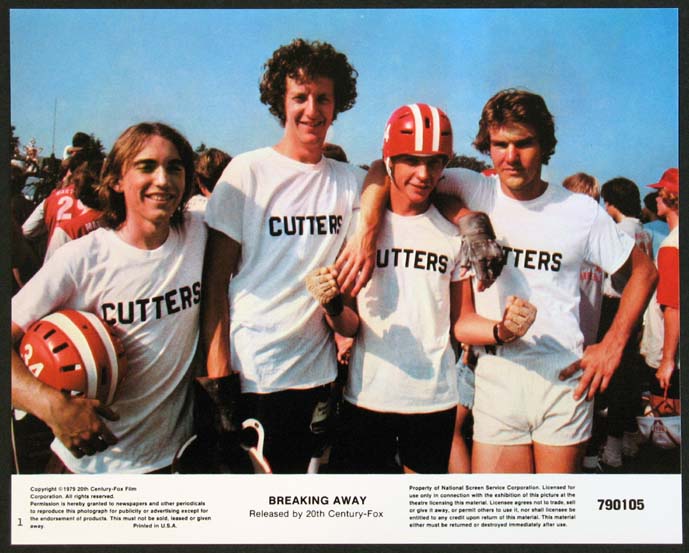 But while the event was conceived as a two-wheeled facsimile of the Indy 500, it is best known as the race at the center of the 1979 coming-of-age film Breaking Away, which won an Oscar for Best Original Screenplay and a Golden Globe for Best Motion Picture: Musical or Comedy. Starring Dennis Christopher, Daniel Stern, Jackie Earle Haley, and Dennis Quaid (and, in a comely cameo, Quaid’s limestone-firm rump in a pair of denim cutoffs) as a quartet of townie “Cutters” who abhor scholastic interlopers, the climactic scene is played out on Little 500 cinder, where the Cutters — spoiler alert, but not really — mount a furious comeback to defeat their Greek-system rivals.

As in any college town, there’s a smattering of townie-student tension in Bloomington. But before the film, there was never a Cutters team, and the guy who inspired Breaking Away rode for a frat.

The headquarters for Secretly Canadian — along with its sister labels, Jagjaguwar and Dead Oceans — are located on the west side of Bloomington, far from Armstrong Stadium. In the office lobby are a pair of gold records, courtesy of Bon Iver, and in the warehouse — where Ludacris is blaring — are the works of such label-mates as Phosphorescent, the War on Drugs, the Cave Singers, Destroyer, Dinosaur Jr., Major Lazer, Sharon Van Etten, and comedian Tig Notaro. They also distribute socks and T-shirts bearing the visage of viral feline phenom Lil’ Bub, who lives in Bloomington.

This being Indiana, in the back parking lot is a basketball hoop, while at the auxiliary warehouse next door, there’s a small plaque bearing the dates of the late musician Jason Molina’s birth and death. Before his premature death in 2013 (he was just 39), Molina had become infatuated with what looks to have been been a one-pump service station across the street, long since abandoned. There, Molina harbored dreams of opening a root beer stand called The Frosty Nickel, which could easily double as a nickname for the Little 5, given the amount of suds involved.

On the Thursday before the women’s race, I check into the bohemian quarters I’ve rented for the weekend. My hostess writes eco-terrorist romance novels, and my host makes sourdough bread from scratch, with plans to crowd-fund his way to a higher-capacity outdoor oven. In their kitchen is a long table for communal dinners, which they host with great frequency.

After settling in, I walk a short distance down the B-Line Trail, hanging a right on Kirkwood, where I meet Suarez and two of his coworkers at Nick’s English Hut for burgers, Bud, and basketball (the Pacers lost to the Hawks).

If Nick’s is a classic place to catch up with classmates over cold beer and sports, nearby Kilroy’s on Kirkwood is another beast entirely, part of a Bloomington-based nightclub empire that’s among the nation’s most profitable. At Kilroy’s on Thursday, everything costs three dollars — including the customized T-shirts that seem to permeate campus. Top 40 hits work a young, thirsty crowd into a euphoric lather.

Further downtown sits Video Saloon (the Vid, for short), a welcoming upstairs dive. Here, approaching midnight, the Secretly Canadian crew expands, the new additions having recently departed for a Schoolboy Q concert on campus, and the people they work with every day morphing into their best friends at night.

Around the time I left the Vid, underage Hoosier basketball players Yogi Ferrell and Stanford Robinson were cited for allegedly trying to get into a bar with false identification (note to college athletes everywhere: When your face is that well-known on campus, don’t use fake ID). But that buzzkill was offset by earlier word that an IU Nursing rider, Lauren Gill, had been upgraded from critical to fair condition after flipping over the top of her handlebars and landing on her head during a time trial the previous week.

Band-Aid-shaped stickers with Gill’s name on them are a popular fashion statement during the women’s race Friday, as are tank tops bearing the Talladega Nights catchphrase, “If you ain’t first, you’re last.” Until the mid-’80s, the women circled the track on tricycles. But then a women’s team nearly qualified for the men’s race one year, and thus the women’s race — run at half the distance (100 laps, or 25 miles) as the men — was born.

The female competitors train year-round and hit speeds of 23 mph during the competition itself. “It’s every bit as big as a varsity sport for the riders who are doing it,” says Kappa Kappa Gamma coach Marc Kase, who rode for an independent (i.e., non-Greek) team as an undergrad. Kase, now 46, flies in from San Diego each April to lead his charges. In turn, they jet out to Southern California to train with him during winter break.

After a nasty spill on Lap 4, which requires a competitor to be lifted off the track in a neck brace and stretcher, the teams, comprised of no more than four riders, settle in nicely, with most far exceeding the minimum five rider exchanges (in the men’s race, it’s 10). After leading most of the race’s final fifth, pole-sitting Alpha Chi Omega gets passed by an independent team, Teter, and the eventual champion, Kappa Alpha Theta, on the last lap.

Tom Ackerman — Sigma Pi, Class of ’97 — can still remember which team won the Little 500 during each of his four years at IU. Mostly it was the Cutters; they’ve won more times — a dozen — than any other squad, dating back to their post-film inception. Only, unlike the Cutters team in Breaking Away, the real-life Cutters — a nickname derived from the limestone-cutting trade that’s big in the area (the entire campus seems forged from limestone) — are all IU students, albeit ones who are unaffiliated with the school’s Greek system and, for the most part, Indiana natives.

But what Ackerman, now sports director at the St. Louis radio behemoth KMOX, remembers most about the Little 500 are the colors. Each team is assigned a different jersey, with their supporters shooting up from the pits in matching garb. The result is a bleacher population that resembles a bag of 15,000 Skittles, foreign to the monochromatic unity that exists within Assembly Hall during a Hoosier roundball game.

In the run-up to the men’s race on Saturday, three skydivers descend from a cloudless sky as Chappy Blackwell IV explains the racing rules — the third generation of Chappy Blackwells to have handled such duties — and Another Round sings “(Back Home Again in) Indiana.” Dave Blase then takes the microphone, remarking that the race will be “a two-hour journey of self-discovery.”

Blase, now 74 and living in Indianapolis, is the inspiration for Breaking Away’s main character, Dave Stoller. Yet while Blase’s obsession with Italian culture and supreme cycling ability were accurately depicted in the movie, he didn’t hail from a working-class local family, and he raced for Phi Kappa Psi, a Greek team that won the race in 1962. Blase rode a whopping 139 of the race’s 200 laps.

As for this year’s race, the Cutters lead as many laps as any of their rivals, with 10 of the 33 teams in contention most of the way. But heading into the final homestretch of the second-to-last lap, the leader — defending champion Beta Theta Pi — wipes out, setting off a domino effect that topples all but one of the top eight teams. The Cutters end up crossing the line eighth, with fellow independent team The Black Key Bulls winning its first Little 500 title, and Momper’s Delts finishing a respectable third.

Wearily, the Skittles bag emptied. But while the race may have been over, the party was about to begin — again.

Mike Seely (@mdseely) lives in Seattle and doesn’t own a bike. His last Grantland piece was about Ken Griffey Jr.