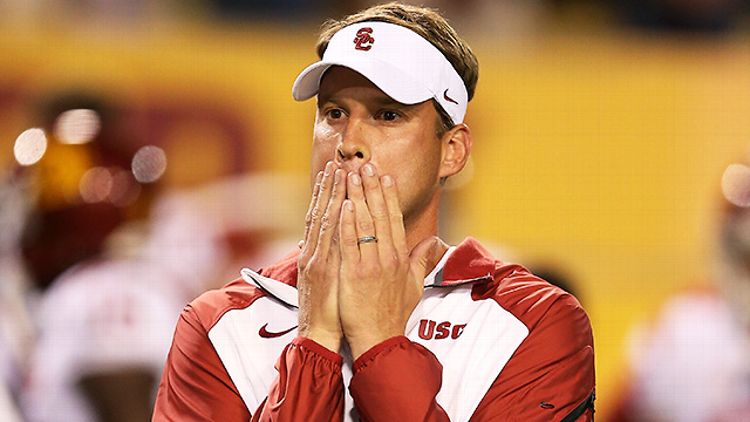 Time to refresh your casual knowledge of The Iliad and research Jon Gruden’s rental properties in metro Los Angeles: Lane Kiffin is making another after-dark career change. At 4:28 a.m. Pacific time on Sunday, USC announced the firing of its fourth-year head football coach via Twitter and a terse announcement on the athletic department website. Athletic director Pat Haden was spotted conversing with university president Max Nikias on the sideline during the second half of the Trojans’ 62-41 loss at Arizona State, and Haden dismissed Kiffin in a 3 a.m. meeting at the airport following the team charter’s return to Los Angeles.

If the time of day seems curious, the time of year may seem even stranger (though not unprecedented — recall the end of John Mackovic’s tenure at Arizona). The move comes five games into the 2013 season, with the Trojans still clinging to a winning record, and two months and four days after Haden proclaimed his unwavering support for his football skipper. In a Sunday afternoon press conference, Haden responded to consecutive questions by first stating, “We support our coaches 100 percent until they are no longer our coaches,” and then saying seconds later that he’d been mulling firing Kiffin since Week 1. But once Haden decided to do the thing, you can’t say he didn’t go about it confidently, seeing as neither he nor Kiffin even made it home from Tempe to shave first.

And despite that 3-2 mark in the W-L column, it’s no kind of stretch to argue the Trojans are headed for at least another three losses in the regular season, with a trip to Notre Dame looming next month and visits from Stanford and UCLA scheduled for November.

Still, after 2012’s precipitous plummet from preseason no. 1 to that wretched Sun Bowl loss, it’s even easier with the benefit of hindsight to argue that this is a move that should have been executed nine months ago. A September firing, with the Trojans presumably intent on landing a successor of sterling quality, will leave the head ballcoachin’ chair vacant for quite some time. (To be fair: However eventually, USC will still end up richly rewarded in terms of personnel, and there is also this angle to consider.) The salvage job on the next recruiting class began before dawn this morning, and is presumably the main reason — along with his head coaching experience, however dismal — for installing defensive line coach, recruiting coordinator, and noted living comic book character Ed Orgeron as interim head coach.

“This is supposed to be a game of fun and joy,” Orgeron said Sunday. “One of the things we’re looking for is to bring fun and joy back into the game of football.” In this, in a way, USC has already succeeded, by putting Orgeron in a situation in which he’ll regularly be called upon to speak into microphones. And if the trickster gods of the game of football are kind, they will immediately land Orgeron another car dealership ad.

In the short term, USC’s season augurs ugly. The Trojans head into a bye week before hosting Arizona, on prime-time national television, on Thursday of Week 7. And there are those dates with the Fighting Irish, Cardinal, and Bruins. In the longer term, somebody you’ve definitely heard of who has a well-burnished résumé is getting a very good job and a house by the beach in Southern California, and everybody else you’ve ever heard of is getting contract extensions.

And in the meantime, we more than suspect, Kiffin’s going to be just fine.