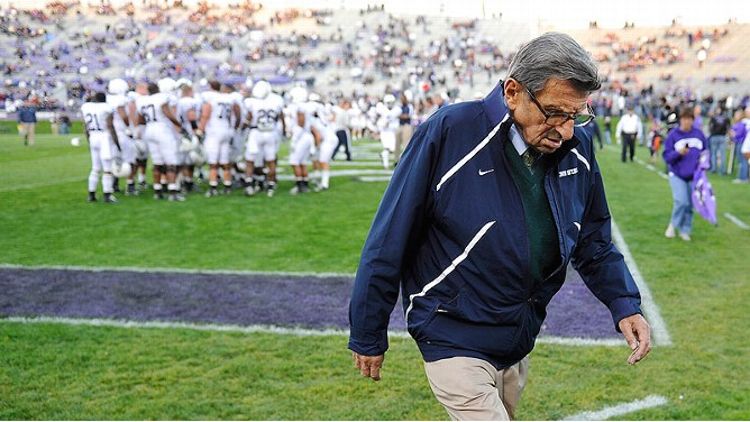 The following is excerpted from Death Comes to Happy Valley: Penn State and the Tragic Legacy of Joe Paterno by Jonathan Mahler. Copyright (c) 2012 by Jonathan Mahler. Excerpted by permission of Byliner Inc. All rights reserved. No part of this excerpt may be reproduced or reprinted without permission in writing from the publisher.

As the 1990s wore on, and [Joe Paterno] crossed over into his seventies, the stories about him grew increasingly elegiac. As hard as it was for anyone to imagine, the Paterno era seemed as though it must be drawing to a close.

There are plenty of football coaches who occupy outsize places within their universities, but the relationship between Paterno and Penn State was different. The two were intertwined, inextricable. They had risen to prominence together — Paterno gaining power as the school grew, the school drafting off his ever-growing fame, absorbing and reflecting the image he projected for himself and his football program.

The Nittany Lions’ games were now televised regularly, providing the school with hours of national publicity on an almost weekly basis. The football team’s prowess had helped earn Penn State an invitation to join the Big Ten, putting the school in the company of widely respected academic institutions like Northwestern and the University of Michigan. Most of all, Penn State’s football program had given the university an identity, an ethos. “We are Penn State” was no longer just a cheer at football games; it had morphed into a collective cry of higher moral purpose.

Even as he was being celebrated as the last unbroken link to the college game’s more innocent days, Paterno had led his program into the modern era, consenting to add a twelfth game to the team’s schedule when it was invited to play in the Kickoff Classic and to install lights at Beaver Stadium. In practical terms, Penn State’s football program had benefited enormously from college football’s explosion. The Nittany Lions were now bringing in tens of millions of dollars a year in TV revenues, licensing fees, and a lucrative sponsorship deal with Nike.

Yet, in another sense, at least inasmuch as Penn State’s football program saw itself as different, it had been a victim of the game’s growth. In short, it was starting to look a lot like that of any other big-time football school: insular and indulged. A small, private village had been built around Beaver Stadium, complete with its own dorm, the Nittany Apartments, where most of the football players lived. Paterno had once boasted about his team’s “spartan” training facilities. Now the Nittany Lions worked out in the $14.7 million, ninety-thousand-square-foot Louis and Mildred Lasch Football Building — which was strictly off-limits to other athletes, let alone the general student body.

During Paterno’s early years as head coach, the small group of reporters who covered Penn State had enjoyed unfettered access to the team. The Nittany Lions were now a priceless commodity that had to be safeguarded, their imperfections hidden from public view. Practices and the locker room were closed to the media. Even student reporters for the Daily Collegian had to go through the university’s media department to speak with classmates on the football team.

There had always been a dynamic tension between Paterno’s idealism and his pragmatism. To a great extent, it was his ability to manage the push and pull of these two warring impulses within himself that had enabled him to build a successful football program that also stayed true to his principles as an educator. But the growing financial rewards of success in college football had changed the game’s competitive landscape. There was less room for idealism, particularly inside a man so obsessed with winning.

Paterno didn’t suddenly decide to abandon his long-professed ideals about the “student-athlete.” He still told his players that school came first; he still enforced his team’s dress and personal-grooming codes. But to some of those around him, these looked increasingly like empty gestures when he was also directing the team’s academic adviser to make sure that players dropped classes that conflicted with football-related activities. “Appearances were very important to him,” says Matt Paknis, who joined Penn State as an assistant coach in 1987. “But the whole ‘Grand Experiment’ was sort of a sham. Players were there to play football.”

Penn State’s success didn’t ease the pressure Paterno put on himself, his coaches, or his players; it increased it. He had other responsibilities outside football now, not just fundraising but negotiating his team’s various contracts. Never really close to most of his assistant coaches, Paterno became increasingly distant. “You had to go through several layers to get an audience with him,” Paknis recalls.

At the same time, he was every bit as controlling and all the more demanding, running his team with the angry intensity of someone who defined success as winning a national championship. Paterno had long since abandoned even the pretense of having any interests or hobbies outside of football, and while his driving competitiveness wasn’t exactly contagious, it did have a powerful effect on those around him. Many of his coaches didn’t like Paterno per se — “even his longtime assistants thought he was a prick,” says Paknis — but they saw how vitally important winning was to him and resolved to do everything they could to make sure he wasn’t disappointed.

The Nittany Lions rolled on. By the end of the 1990s, demand for tickets was so great that even dues-paying members of Penn State’s alumni organization, the Nittany Lion Club, were getting shut out of games. Beaver Stadium needed more seats. It also got glass-enclosed luxury suites and a 28,000-square-foot lounge for VIP boosters, as well as a new instant-replay screen. Stopping by one day to check on the progress of the renovation, Paterno was mobbed by construction workers who wanted him to sign their hard hats.

It seemed as though the monolithic stadium, now second only to the University of Michigan’s in size, might never stop growing. Not everyone was convinced this was in the school’s best interests. “It makes you wonder at what point we will lose something,” the president of the student government told the Daily Collegian.