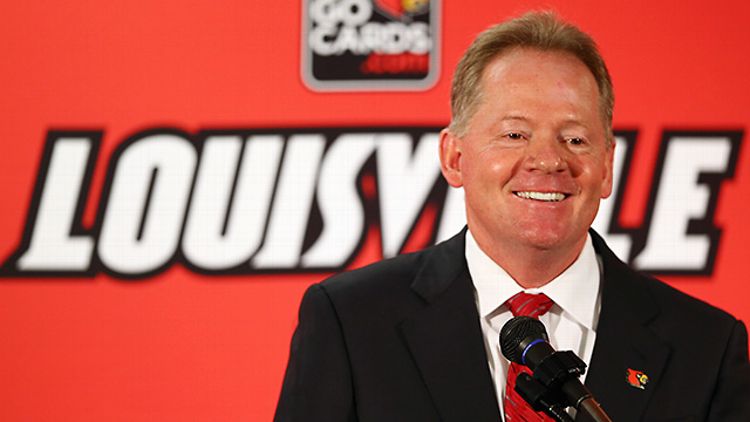 Hand it to Louisville, which despite all its recent football success is still viewed nationally as a basketball institution: When it came time to rebound from Charlie Strong’s departure to Texas, the athletic department caught the reboundiest rebound possible. (Did you like that? It’s a basketball joke. We made it for you.) Just look at these exclamation points. Just look at these smiles. These guys are smitten. Feels like the first time. Feels like the very first time.

Since that first time, for those of you keeping score at home, Bobby Petrino has: interviewed with like five other teams that we know of, then lied about it; decamped to the Falcons; fled the Falcons for Arkansas; hired his mistress to a state university job; crashed his motorcycle, lied some more, and gotten fired; and taken the Western Kentucky job so he “could get closer to Louisville” and come back to reclaim his throne, which per university policy is constructed entirely of warm Papa John’s garlic butter tubs. If this is performance art, it’s sterling work.

Watching Petrino’s introductory presser Thursday irritated us to distraction, though, and not for the reasons you might imagine. Nobody knows better than Louisville AD Tom Jurich just exactly what he’s getting into, but is it necessary to do quite so much pretending? Let this hire be about what it’s about, which is Louisville’s W-L column, and leave off sticking Jurich behind a live microphone to say things like, “Has anyone been through more adversity than [Petrino]? I can’t imagine.” (Hours to the east, Riley Cooper nods sympathetically, without quite knowing why.) That had to take hours of practice to say with a straight face, and one presumes Jurich does have other duties to attend to. It got worse, in the form of Petrino being asked whether he cared about his public perception, and delivering the following answer: “Certainly you care. And it hurts when you hear things that are said about you. It hurts the family.” Bobby Petrino said this out loud, from his mouth.

And none of this was necessary. None of it. We’re not mad. We’re pragmatic. And it’s their money. But our time, Jurich’s time, and Petrino’s time are being wasted with this bit of theater, and we’re at a loss to imagine why, upon having the audacity to make this hire, anybody at Louisville thought this might be necessary. Petrino himself nailed its pointlessness, right after that “It hurts the family” bit: “We’ll get the fans back.” He will, when he wins, which he will. We don’t mind the Petrino hire, but it wouldn’t change a thing if we did. We mind being asked to accept him as a person with human feelings, and to accept that Jurich has done so. It’d save everybody a lot of time if we’d all just own up and skip it.

We do have questions, none of which were addressed during the presser, and they’re just that: questions. We’re not being flip. We’re genuinely, dispassionately interested to find out:

• What will a Bobby Petrino program, not a team, look like?

• How concerned were Louisville’s higher-ups about Petrino’s recent history, not counting the sexytime stuff?

• How will Louisville’s competitors use this hire against the school in recruiting, particularly with recruits’ parents? Will it be effective?

• How does Jurich imagine Louisville’s players will benefit from this development, apart from their win-loss record?

• Why does Louisville’s mascot, a bird, have human teeth?