The Winter of Bob Stoops’s Discontent 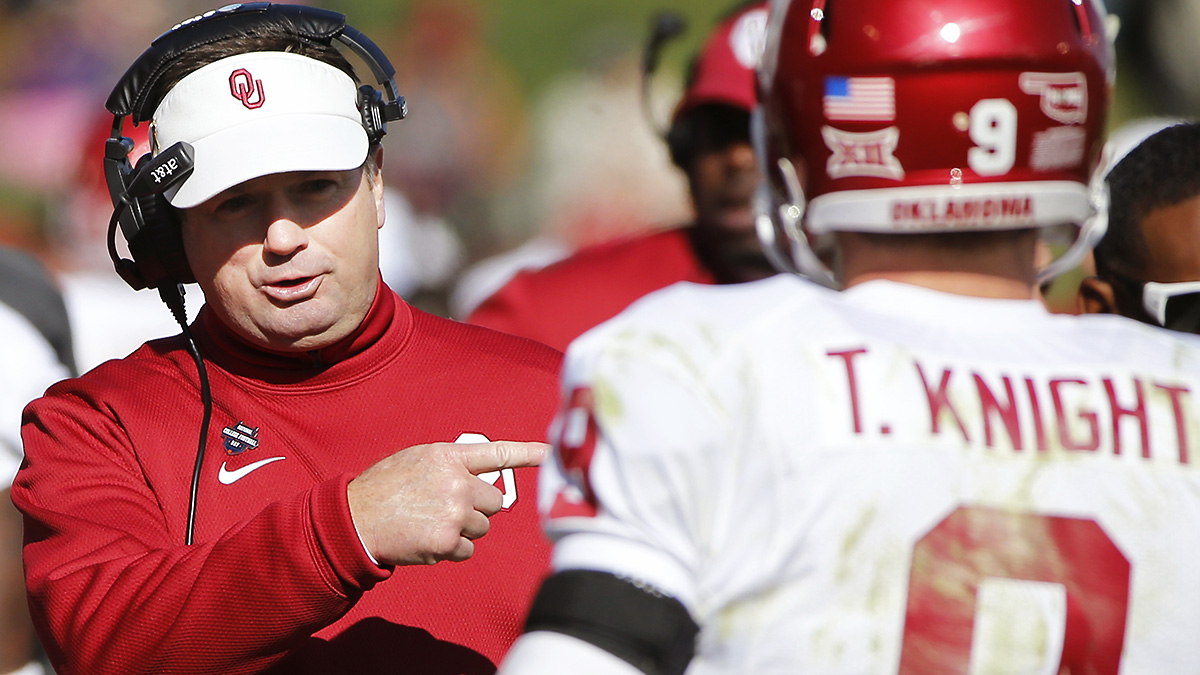 First, a disclaimer: This is not an article about the “hot seat.” Precisely the opposite, in fact: It’s about a coach who remains so entrenched after 16 years that talk of his impending exit would be inconceivable. For a heavyweight like Oklahoma’s Bob Stoops, job security isn’t really the question. The question is what the implications of that security are at a moment when the longstanding semblance of forward progress, momentum, and optimism surrounding the program has been blown to smithereens.

If there were any lingering debate over the shifting trajectory of Stoops’s program, it was emphatically settled by the Sooners’ 2014 swan song, a 40-6 flop against Clemson in the Russell Athletic Bowl that was every bit as miserable as the score suggests. (Really, what’s left to debate when “Russell Athletic Bowl” isn’t even the most depressing part of the sentence?) The postseason debacle put the exclamation point on an 8-5 campaign that qualified as a sustained, gradually escalating failure in light of pie-eyed preseason expectations, and among the locals it fueled the sense that the Sooners had hit a new low on Stoops’s watch. For some of them, like the Tulsa World’s John Hoover, the finale marked the beginning of the end for the current administration, “a painfully clear indication that whatever mojo Stoops had when he started at Oklahoma is long, long gone,” even if his denouement is bound to stretch out for years. Suddenly the end game seems like a very real possibility, and one that Stoops recently felt compelled to acknowledge.

“My dedication has been questioned the last few weeks,” Stoops said during his first postseason press conference, descending defiantly into the fray. “I’m more determined [than] ever to get Oklahoma back in position to compete for national championships. I’ve got a lot invested in this program and no one cares about it more than I do. I’ll promise you, I’m as dedicated as the day I walked in.”

The irony, of course, is that 2014 was supposed to be the season the Sooners rediscovered their mojo; instead, it may go down as the season in which they watched it evaporate. The year began on Oklahoma’s highest note in some time, a 45-31 stunner over heavily favored Alabama in the Sugar Bowl, which inspired an overly enthusiastic response from the preseason punditocracy: The Sooners opened the season as near-unanimous favorites to win the Big 12 and consensus front-runners for a playoff slot.

After exceeding slightly diminished expectations in 2013, they were back in the top 10 in the initial AP poll for the 13th time in 14 years, this time at no. 4. Quarterback Trevor Knight, only a part-time starter in 2013, was elevated into the preseason Heisman race on the strength of his Sugar Bowl performance alone. Even in August, it was easy to see that the optimism was being fueled more by the “OU” on the helmets than by the actual depth chart, but until the end it was never totally clear how far behind the curve this team really was. The Sooners were favored to win every single game, including their bowl.

The hype made the 8-5 record look that much worse in comparison, and the reality was even worse than the record. The Sooners finished 0-4 against ranked opponents, including a pair of 34-point blowouts at the hands of Baylor and Clemson. They barely survived an upset bid from another subpar Texas side, then blew a late, two-touchdown lead against a greatly diminished Oklahoma State squad that had lost its previous five games by double digits. The home crowd in Memorial Stadium sat through three losses in 2014, nearly as many as the five total defeats it had endured in Stoops’s first 15 years. The season-ending flops against Oklahoma State and Clemson marked Stoops’s second set of consecutive losses since his inaugural season, in 1999.

At this point, the Stoops era at Oklahoma can be divided into three phases. The first is the golden era, a decade-long run from 1999 to 2008 that produced six conference championships, a national championship in 2000, and three subsequent appearances in the BCS title game. The second phase, which has only just begun to come into focus, commenced in 2009, when results began to lag behind expectations: The past six seasons yielded just one outright Big 12 championship, in 2010,1 while 2014 marked the fourth time since ’09 that the Sooners have finished 15th or worse in the AP poll after opening in the top five. Viewed in that context, the briefly galvanizing upset over Alabama was an exception, not a return to form, and arguably the only thing keeping OU from being labeled as a perennial underachiever before this season. The third phase begins now, with the expectations finally catching up to the diminishing returns: For the first time since Stoops stepped on campus, the Sooners stand a very real chance of being left out of the preseason polls altogether.

“When I first took the job, all anybody wanted to tell me was just beat Texas,” Stoops said in the immediate aftermath of the bowl loss, reflecting on a campaign in which a skin-of-the-teeth win over the Longhorns was the only real solace. “Well, that doesn’t fly. I knew it didn’t then and it still doesn’t. So, yeah, this [season] was very disappointing and especially the way it finished.”

A few days after the humiliation against Clemson — in which Oklahoma went three-and-out six times, committed five turnovers, and trailed 40-0 before tacking on a meaningless touchdown in the fourth quarter — two offensive assistants were sent packing, including the chief playcaller, co–offensive coordinator Josh Heupel, better known as the starting quarterback on Stoops’s only national championship team.2 The other casualty was co–offensive coordinator Jay Norvell, an ace recruiter who worked mainly with the wide receivers. In Heupel’s place, Stoops imported 31-year-old Lincoln Riley from East Carolina to take the offense back to its roots in the Air Raid, the same philosophy Stoops coveted when he hired Riley’s pass-happy mentor, Mike Leach, as his first offensive coordinator in Norman in 1999.

The last two seasons were the most run-oriented campaigns of Stoops’s tenure, largely out of necessity. As quarterbacks coach, Heupel shouldered the blame for an apparent failure to develop Knight, who ultimately looked less like the Saban-slaying MVP of offseason lore than like the injury-prone mediocrity who had struggled to hold down the starting job before the Alabama game. As a sophomore, Knight finished squarely in the middle of the pack among Big 12 starters in passing efficiency, total offense, and almost every other relevant statistic before sitting out the last three games of the regular season with a neck injury. He returned to throw three interceptions in the bowl game, one of which was returned for a touchdown, making Knight responsible for a pick-six in three of the four losses that he started, and nearly in all four.3

But Knight was always regarded as more of an athlete in the Manziel mold than a traditional, stand-and-deliver pocket passer, and now the larger reclamation project might claim the incumbent quarterback as well. At least three other candidates will be realistically vying for the starting job this spring.

One thing that won’t change is the defense, where Stoops’s brother Mike will remain in charge of the same staff4 despite an equally deflating turn on that side of the ball: The 2014 Sooners yielded more points per game (25.9) than any other team of the Stoops era, narrowly surpassing a 2012 outfit whose generosity prompted a fundamental shift in the defensive scheme. The aforementioned turnovers played an obvious role in that number, as did special teams (the collapse against Oklahoma State hinged on a late punt return for a touchdown by OSU’s Tyreek Hill). Still, for a unit that was expected to anchor a run at a conference championship at minimum, the results — 52nd nationally in total defense, 55th in scoring, 39th in Defensive F/+ — were at least as damning as the struggles on offense. But the brothers will pursue the fix together.

“I take accountability and responsibility for all of it,” Bob Stoops said at his postseason presser. “I’m the first one to be held accountable.” At 54, he’s been around long enough5 to have weathered his share of skeptics and setbacks. He’s also far too young to feel entitled to rest on his laurels, much less to be led out to pasture like Bobby Bowden at Florida State or Stoops’s old rival Mack Brown at Texas. While doubters insist they can see the end looming on the horizon, Stoops has made it abundantly clear that he has no plans to ride into the sunset. He doesn’t have anything left to prove. But after 16 years, he’s suddenly facing the task of getting the thing going again from a dead stop.

The Original Saboteurs of Super Bowl Media Day: ‘Punch It Up, Cubby! Punch It Up!’