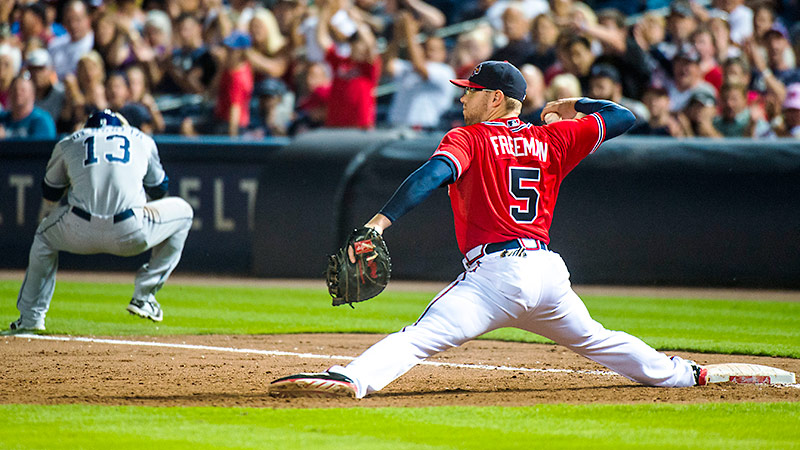 As I wrote last month when assessing Clayton Kershaw’s massive extension with the Dodgers, baseball’s shifting financial landscape has made it increasingly difficult to evaluate whether a deal is “good” or “bad” for a particular team. The Dodgers, for example, won’t suffer from giving a lucrative three-year deal to pedestrian reliever Brandon League or spending a quarter-billion dollars and multiple prospects to secure two good but not great players and one injured albatross.

The Braves don’t have that luxury. They’re locked into a terrible local-TV deal that makes them one of baseball’s poorest teams in that department, with the gap between Atlanta and other franchises bound to grow between now and the end of the team’s agreement with Fox Sports South in 2027. When The Atlanta Journal-Constitution interviewed Braves CEO Terry McGuirk a year ago, McGuirk uttered the five dreaded words that demonstrate the frustration Atlanta’s brass has over inheriting this TV deal from previous management: “It is what it is.”

So in this case, we can’t simply dismiss critics’ concerns over a $135 million contract by saying that every team is swimming in money. The Braves, like every other club, will get an extra $26 million in national TV revenue this year, and there’s hope the sweetheart deal they’re getting on their new stadium will boost club finances as soon as Opening Day 2017. But without the local-TV windfall many of the Braves’ NL rivals (albeit notably not the Nationals) enjoy, Atlanta can’t simply chalk up $135 million as a rounding error and move on to the next big splash. If the Braves are going to succeed over the next few years, Freeman really can’t be a bust.

The good news is, he probably won’t be. Freeman has been a productive hitter throughout his professional career. He hit .303/.364/.474 in the minor leagues despite being uncommonly young at each stop, capping his apprenticeship by batting .319/.378/.521 as a 20-year-old at Triple-A in 2010. The Braves, who tend to use scouting instead of financially driven service-time calculations to decide when a prospect is ready, made Freeman their Opening Day first baseman the following spring and were rewarded for the gamble. In 2011, Freeman played 157 games and hit .282/.346/.448, 20 percent better than league average that year. He put up fairly similar numbers the following season, hitting a lower .259 but maintaining a comparable OBP (.340) and slugging average (.456) thanks to more walks and a bit more power.

Freeman’s 2013 performance earned him this gigantic extension, however. Shaking off a 15-day DL stint that came after just five games, he went on to hit .319/.396/.501, matching a career high with 23 homers and setting a new a career best with 109 RBI. While Wins Above Replacement isn’t a perfect way to gauge value, especially given the intricacies of first-base defense (the −24 number in Freeman’s defensive column for his rookie season looks especially loopy), Freeman was pegged as a five-win player in 2013, and he was one of the NL’s best players by any measure.

So really, there are only two questions: Will Freeman remain an elite player for at least the next few years? And does he actually need to be a star for this deal to be worthwhile?

I considered that first question back in November, in the second annual installment of Grantland’s MLB Trade Value column. Freeman, who was then eligible for arbitration for the first time and had three years of controllable service time left, ranked 38th. Critics who knock Freeman’s 2013 numbers point to two factors: a .371 batting average on balls in play that helped Freeman post a .319 overall average, and the .443 he hit with runners in scoring position to help rack up all those RBI. Freeman’s 2012 BABIP came in 76 points lower, and he hit just .219 with runners in scoring position in 2012, suggesting that neither of those 2013 marks looks sustainable. We might be able to dismiss the “clutch” numbers (and the abnormally weak 2012 RISP numbers) as a fluke, but we probably shouldn’t do that with his success on balls in play. While luck does govern balls-in-play results to a certain extent, hitters also have a considerable amount of control over the process.

Unusually high-BABIP hitters are often speedsters who beat out tons of infield hits, masters of bat control who can flip line drives and bloopers over the shortstop’s head seemingly at will, or in the case of someone like Ichiro Suzuki, both. Freeman is one of the slowest players on his team, but he hits a boatload of line drives. And despite his above-average power (he’s averaged 22 homers over his first three full big-league seasons), he hits the ball the other way fairly often. As I wrote in that MLB Trade Value piece:

Over the past two seasons, Freeman owns the third-highest line-drive rate among all qualified hitters, at 26.3 percent, trailing only Joey Votto and James Loney. Line drives obviously fall in for hits far more often than ground balls or fly balls; batters hit .674 on line drives put in play in 2013 compared to .240 for ground balls and just .182 for fly balls. So if Freeman really does have a knack for hitting more line drives than almost anyone else, he’ll probably keep hitting for high averages. While a slow-footed first baseman might seem like an ideal candidate for defensive shifts, which tend to suppress batting average on balls in play, it turns out they’re not necessarily a great idea against Freeman. In 2013, he lashed 33 percent of his hits on pitches on the outer half of the plate to the opposite field. That’s not quite Tony Gwynnesque, but it’s still better than the league average of 30.5 percent.

So while we might see some pullback in Freeman’s balls-in-play results, and while we’ll certainly see some regression on his stats with runners in scoring position, there’s enough here to suggest we could be looking at a consistently near-.300 hitter with power and a good batting eye going forward.

Other trends point in Freeman’s favor as well. He’s progressively walked more, struck out less, and swung at more pitches in the strike zone. He’s also just 24 years old, so he could certainly get better with experience, since most hitters peak in their mid- to late 20s. And his defense — those bizarre rookie numbers notwithstanding — looks very good, ranking in the top 10 for first basemen by advanced metrics in 2013 and frequently receiving praise from traditional talent evaluators. Freeman may or may not develop into the kind of slugger who cranks 35-plus homers a year, but we’re no longer in the late ’90s; if he continues to produce somewhere near 2013 levels, it’ll be enough to make him an elite first baseman and the Braves happy with this deal.

If 2013 proves to be fluke, though, this deal could present eventual problems for the Braves. While the exact contract terms haven’t been made official, it’s likely the final five years of Freeman’s contract — the five that would have represented his first half decade after free agency — will run at least $20 million per season. The cost of a win on the open market currently comes in at around $6 million a year, and figures to edge higher over the next three seasons. That means Freeman could settle in as a three-win player and give the Braves reasonable market value for their buck.

The problem is that market-value deals won’t be good enough to keep the Braves at or near the top of the NL East standings. As Ben Lindbergh wrote last month at Baseball Prospectus, the combination of Atlanta’s propensity to ignore service time when calling up prospects and its failure to sign its top young players to below-market, Evan Longoria–style long-term deals means the Braves might not be able to keep some of their core players through their prime years. In addition to signing Freeman to the first contract of more than two years given to a homegrown player since Brian McCann’s 2007 deal, Atlanta also gave Jason Heyward a two-year, $13.5 million contract that could become a bargain. But unless the Braves double down with another deal at some point, Heyward will get to test free agency just after his 26th birthday. Meanwhile, Craig Kimbrel will likely test arbitration for the first time later this month, and he’s already asking for $9 million. As dominant of a closer as Kimbrel is, the Braves will soon have to decide if they want to spend $15 million or even $20 million per year on a pitcher who gives them 60-odd innings a year, many of those with the team up two or three runs and the bases empty in the ninth.

Those contract situations coupled with the team’s low revenue streams, a farm system that severely lacks depth, and a Nationals roster loaded with dynamic, young talent mean the Braves need to be spot-on with their player evaluation and contract decisions if they hope to retain their NL East supremacy over the next few years. It also means that from now through pretty much 2021, Freddie Freeman will need to be very good … and preferably great.

Men in Blazers: With Special Guest Mat Prior!