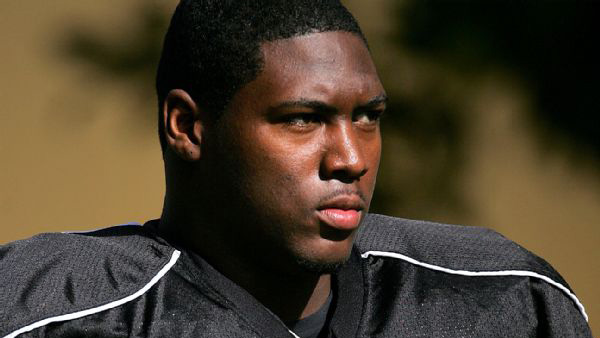 Alabama has dismissed 21-year-old defensive lineman Jonathan Taylor from the football program following a weekend arrest on domestic violence charges. Headlines like the ones he’s made are distressingly commonplace in college football. It all runs together after a while — and that’s understandable and terrible at the same time.

But you might remember Jonathan Taylor for being one of four Georgia football players arrested, a little over a year ago, on charges of theft by deception after university police said they uncovered a scheme by players to double-cash their stipend checks. You might remember his ejection from UGA’s football program in July, after police said he choked and punched his girlfriend; they charged him with felony aggravated assault. You might also remember, just last month, Nick Saban defending Alabama’s signing of Taylor with Taylor’s charges from his time in Athens still unsettled, characterizing the choice to admit him as a group decision and saying “He was the kind of guy that deserved a second chance.”

Taylor has yet to see a trial for either of his pending cases in Athens. This new development in Tuscaloosa will take a while to resolve itself. In the meantime, how do we begin to make sense of a player in Taylor’s situation in Athens being allowed into Alabama in the first place, after a one-season stopover in the junior college ranks? Walk with me a little way. Here’s what we know right now:

We know Taylor is accused, again, of assaulting a woman. We know he has been dismissed from the team, per the following Saban statement:

“Jonathan Taylor has been dismissed from the team and is no longer a part of our program. This will still need to go through the legal process, but when he was given an opportunity here, it was under strict guidelines and we made it clear there was a zero tolerance policy.”

We know that whoever writes press releases for Alabama athletic director Bill Battle is not great at euphemisms:

“Representing this University is a privilege that none of us can take for granted. As I noted in my comments when the decision was made to allow Jonathan Taylor to attend the University on a football scholarship, I believe in second chances. I still do. However, being successful in that second chance requires responsibility and accountability. In Jonathan’s situation, the University and the Department of Athletics set forth very clear standards of accountability and expectations of conduct. Jonathan was afforded a chance to successfully overcome the difficulties that resulted in his departure from the University of Georgia. Unfortunately, it appears that he was unable to do so, in spite of extensive efforts to assist him. All of us hope that Jonathan and the young lady involved can deal constructively with the issues that led to this situation, and their aftermath, so that both of them can have productive, healthy futures. Violent conduct by any representative of the University of Alabama athletics department will not be tolerated. More than ever, we take seriously the responsibility that all of us have to represent our University and our state in the best way possible — in competition and in daily life.”

And we know that Athens-Clarke County district attorney Ken Mauldin and Georgia head coach Mark Richt both say they weren’t contacted by Alabama during Taylor’s recruitment process, blurring our preconceived notions of whatever Alabama’s staff was doing while they were supposed to be fully vetting Taylor prior to offering him a scholarship. Bama did make contact with Taylor’s high school and juco coaches, leaving the unavoidable impression that they stopped once they heard what they wanted to hear. And taking all that into account … again, how did we get here?

I can’t put myself in their places, Saban’s and the athletic department’s and whatever university personnel were involved in Taylor’s admissions decision. We don’t know, will likely never know, the precise sequence of events that led to a scholarship offer, and still wouldn’t have a clue as to the thought process of each party even if we did. We just have their actions and public statements to go by, and the available information doesn’t make a lick of sense.

This is not a new kind of dilemma for college football, just one of the most recent and puzzling cases. Guys charitably labeled as “troubled” get signed by any number of teams every offseason. But Alabama’s apparently specific need for Taylor’s presence on the Crimson Tide was baffling to begin with. They weren’t the only team after him,1 but they snagged him, and why they even wanted to bother with him has been the subject of much curiosity. If some school with a bit more of an up-and-coming profile, a team with far more obvious needs, had signed Taylor … wouldn’t this make a lot more sense? It’s still entirely unacceptable, of course — but at least there’d be a clearer train of thought to follow.

Even if you indulge in the crassest of hypotheticals and draw a direct line between Ohio State’s offensive output in the Sugar Bowl and this corrupted attempt to bolster Bama’s defensive line, this is still the Tide we’re talking about here, a team whose recruiting rankings are studded with gold, a program that rarely deigns even to pick up a three-star prospect. Taylor the football player was well regarded on this season’s ESPN juco watch list, but the risk-versus-reward balance seems ridiculous.

Unless, of course, the answer is the simplest, scariest one: Not antipathy, not exactly apathy, but an indifference born of a complete absence of any need to weigh the dangers. Did Alabama consider the risks of bringing Jonathan Taylor to Tuscaloosa, and decide they merited his inclusion on the team? Or did Alabama never need to care about the risks at all?

Right now, it’s the only explanation that makes sense. What risk was there, really, to the program? This sport shifts glacially, and won’t change in time to adversely affect the careers of anyone who had a hand in this decision, or others like it. Neither the Crimson Tide’s recruiting nor their 2015 win-loss record will suffer. It seems most likely that they didn’t properly consider the admission decision, because they had no real need to. Because this little media conflagration that has unfolded over the past couple of days is Alabama’s worst-case scenario for a repeat assault allegation against Taylor: to be yelled at for a little bit.

With his swift dismissal from the football program, and Taylor’s short stay in Tuscaloosa, Alabama’s team staff won’t even feel compelled to address his presence from here on out. We know what we know, and I expect that’s all we’re going to get. As of this writing, the athletic department has not responded to a request for clarification of what those “extensive efforts to assist” Taylor consisted of. That thought will get consigned to a mental bin of unanswered questions, atop “Why did Alabama’s athletic director refer to two pending criminal trials as ‘difficulties’?” and “In what way does Alabama’s athletic director recommend that one recover ‘constructively’ from an alleged domestic assault?”

The Taylor episode will subside, at worst, into what will euphemistically be called a “distraction” for the football program. It won’t take long. That particular elision when we discuss these things, that inertia, takes hold so quickly, so insidiously. Difficulties, you know. By the time we all reconvene in July for SEC Media Days, Saban will be deploying that “I’m not mad, I’m just disappointed, but also mad” face full-time. He’ll rattle off whatever combination of word-pap he has calculated will get him out of that topic the quickest, in a tone of stern patience that says we should know better than to ask. And truth be told, maybe we should. We already know how much good it’ll do anyone.

Titus’s 20 Sweet 16 and Elite Eight Observations: Sympathy for Notre Dame and Arizona, the Sam Dekker Comparison Machine, and the Road to the Dream Final Four