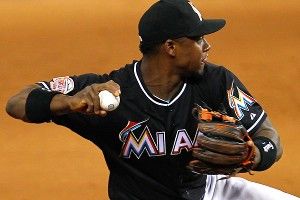 “We have certain veterans who we thought would carry us in Hanley [Ramirez] and [Jose] Reyes, and that the kids would take that next step. [Giancarlo] Stanton, to his credit, is for the most part taking that step, but [Logan Morrison] has not, and the veterans have crapped all over themselves.” — Michael Hill, Miami Marlins general manager on Showtime’s The Franchise: A Season With the Miami Marlins

And like that … the dream of a championship season in the Marlins’ new, taxpayer-funded, $634 million stadium was gone.

Three years ago, Ramirez was one of the 10 best players in baseball. He hit .342/.410/.543 that year, swiped 27 bases, and handled himself well enough afield to be a competent defensive shortstop. It’s been an ugly decline to the middle since then: Ramirez grew bigger and slower, his defense got steadily worse, he struck out more, got on base less, and his power dipped (though not as sharply as did his other skills). He also came across as petulant on multiple occasions, from his famous ball-booting misadventure in May 2010 to his clashes with then-manager Fredi Gonzalez to his public refusal (at first) to move off shortstop when the Marlins signed Jose Reyes. There were extenuating circumstances in several cases, from Ramirez having hurt his ankle earlier in the “Why didn’t he hustle?” game to the understandable pride and borderline arrogance professional athletes need in order to laugh in the face of demotions (or perceived demotions). Not to mention the many, many, many cases in baseball history of players perceived as attitude problems who still hit the crap out of the ball and win games for their teams.

The Dodgers surely hope the proverbial change of scenery will inspire Ramirez to be a get-along guy. What’s not clear is how good a player he is at this point. We can credit the 108-point drop (!!!) in his batting average on balls in play between 2009 and 2012 somewhat to luck: good luck in ’09 when he posted a .379 mark, and bad luck to see that BABIP regress to 20 points below league average. But other factors are in play, too, from Ramirez swinging at more pitches out of the zone to a spike in infield pop-ups to his declining speed.

Still, there’s upside here. Ramirez is just 28. After the worst season of his career in 2011, he’s regained at least a good chunk of his power stroke this year, hiking his Isolated Power (slugging average minus batting average) to .181 from .136 last year. And from the Dodgers’ point of view, Ramirez can’t help but be an upgrade. At third base, Juan Uribe is awful, and his replacement, Adam Kennedy, is headed to the DL, while at shortstop Dee Gordon was hitting like a pitcher before hitting the injured list, and his replacement, Luis Cruz, is a journeyman with a lousy batting eye who’s on his sixth organization.

He didn’t cost much, either, with the Dodgers holding fast to their top prospects, instead agreeing to pick up all of the $40 million left on Ramirez’s contract that runs through 2014 (the A’s were reportedly in on Hanley, too, but balked at a deal that would’ve had the Marlins pick up half of Ramirez’s remaining contract in exchange for higher-caliber prospects). Throw in sidewinding LOOGY Randy Choate, who’s held lefty hitters to a career .562 OPS, and you get a deal that surely makes the Dodgers better for the duration of this season. Given that they’re 2½ games out in the NL West and smack in the middle of a heated wild-card race, it’s a move they had to make.

As for the Marlins, you can’t quite call this an outright dump trade. Eovaldi is a major league-ready starting pitcher who’s been respectable in his first go-round as a regular rotation member (4.15 ERA, vs. MLB average for starters of 4.42, plus a 4.07 FIP). He’s just 22 years old and can’t become a free agent until after the 2018 season. McGough’s a lesser prospect, but he’s flashed some big strikeout rates in the low minors and could be an effective major league reliever down the road. Money was certainly a big factor, but the Marlins did get something for their wares.

There’s likely more to come. With Anibal Sanchez and Omar Infante gone to Detroit, Josh Johnson could be the next major piece shipped to another area code. You could argue that the latest tear-down job by a franchise with a history of them (and no World Series preceding it this time) is a sign of bad faith by Marlins ownership, especially after snookering clueless local government into an unfavorable stadium deal. Or you could simply say that the Marlins’ offseason spending spree was ill-advised, given the roster’s multiple holes (for the record, I liked what they did and thought the team had a good shot at making the playoffs).

Either way, the big talk of the winter has given way to yet another summer of discontent in Miami.