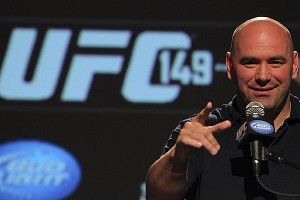 The success of HBO’s Hard Knocks and 24/7 proved human interest stories build sports brands and win awards. Let’s face it, if you can both make the NFL preseason feel captivating and domesticate the NHL, you’re probably onto something. The UFC might not be cleaning up at the Emmys, but ever since Ultimate Fighter launched on SPIKE in 2005, behind-the-scenes access has been nearly as important to the growth of mixed martial arts as the fights have been.

You may have seen “Countdown to UFC,” those beautifully produced teaser videos for pay-per-view events and Fox cards. Fighters are often followed to their hometowns and viewers are given glimpses into their private lives (sometimes dating back to childhood). Training montages and candid footage of perfunctory activities are effectively woven into an intriguing tapestry. Witnessing a fighter’s training camp conveys the enormity of the stakes, the sacrifice that makes victory ecstatic and defeat so agonizing. Fans are usually left with reasons to support both fighters — an oddity in professional sports. And don’t chime in about being emotionally torn between Orser and Boitano during the ’88 Olympics.

Still, even if those fancy productions elevate the UFC and its fighters, those shows can seem a little too polished or scripted. The rawness of the UFC’s vlogs feels more “on brand.” UFC president Dana White’s vlog takes fans where they really want to go — which is everywhere he’s going. (Would you ever say that about David Stern or Roger Goodell? Not happening. Gary Bettman? No way. Bud Selig? That’s downright creepy.) White rolls cameras in airports, locker rooms, offices, BALCO, and anywhere else the sport might venture. The overall invasiveness is mesmerizing — and often, inadvertently funny as hell.

Last week, the UFC made history. The release of White’s first vlog about UFC 148 somehow ended up being more entertaining than the entire UFC 149 card. You should watch it right now. If you want to understand what’s happening, my notes are below the embedded clip.

0:01 — Make sure you skip the 30-second ad at the beginning with White gushing about Qantas Airlines. Oh wait, that’s the start of the vlog.

UFC director of sales: “Dana, great news! Last week, both United and American said they were interested in becoming the official airline sponsor of the UFC!”

Dana: “You might want to hold off on that.”

0:48 — Dana begins his backstage excursion by greeting the various fight teams, including middleweight Cung Le, who is having his hand wrapped courtesy of cut man Don House. (We’ll later find out House should have been wrapping Le’s foot.) Over the next few minutes, the phrase “Good luck tonight” will be repeated with abandon (seven times), and Dana will accumulate enough handshake bacteria to wipe out an entire M.A.S.H. unit. Our final tally: nine handshakes. (Hugs, back slaps, and gropes excluded.)

1:06 — Ronda Rousey, the current Strikeforce Women’s Bantamweight Champion, is an absolute wreck even though she’s not on the card. She says it’s about “cornering,” but to the keen observer it’s clearly a panic attack about having to wear a Cody McKenzie T-shirt. “It’s not me,” she confesses. Excellent point.

1:29 — Hey, there’s Steven Seagal — all 400 pounds of him! For those who don’t remember, Seagal was credited with teaching Anderson Silva the devastating front-face kick he used to knockout Vitor Belfort at UFC 126. Seagal is now a fixture in the Silva posse, but he continues to make people uncomfortable by intermingling reality with fiction. Definitely find time to watch this clip even if you don’t keep track of space and time too well.

1:53 — Dana stops short of entering another locker room as if it might be a lounge for concession workers on break. Under normal circumstances, he would have still hugged everyone in the room, but his furtive retreat after overhearing a fight recap made it look like he lost a bet. He quickly leaves to double-down with his bookie.

2:06 — We’re inside the Octagon! Light Heavyweight Forrest Griffin explains to former champ Tito Ortiz that only one of his two knockdowns were legitimate (Griffin likely lost his footing with the other). We see Griffin’s hand raised in victory, but what we don’t see is his unexpected, Tommy Riordan–esque bolt from the Octagon prior to the decision. More on this later.

2:50 — Tito rehashes the final fight of his injury-plagued, Hall of Fame career. His sixth loss in his last seven outings, it was still a semi-respectable parting performance. With that said, if Tito was a talking action figure back in the era of the Commodore 64, he might have had three or four alternating excuses at all times. Fast-forward to supercomputing in 2012, and there are over 1,000.

(Note: In 1978, I received a full refund after returning a G.I. Joe with a torn meniscus to Sols toy store in Stamford, Connecticut.)

3:33 — We’re just minutes away from the most widely anticipated championship fight in UFC history: Chael Sonnen versus Anderson Silva. All the trash-talk and hype have led to this moment … Silva’s entrance into a sold-out MGM Grand Arena. Suddenly, the burgeoning tension and excitement are short-circuited by the 400-pound hologram of Steven Seagal in Silva’s entourage. This cannot be happening!

4:24 — A dejected Sonnen undergoes a medical check and heads to his locker room after taking a knee to the chest that resulted in a stunning second-round TKO. We see Sonnen greeting a disabled veteran (a moment that tempers the importance of what just happened), then passing featherweight Chad Mendes and admitting without complication, “I got beat.”

There’s a certain beauty to this exchange — no explanation or excuse for falling short in the biggest fight of his career. Sonnen competed at an elite level and accepted the outcome with grace. Eventually, he reaches his nutrition coach, Mike Dolce, who can only offer a smile in support of the stunned former champ. Fortunately, there’s only one way this night can get worse for Sonnen — getting cornered at the post-fight party by Steven Seagal.

5:27 — Dana and Forrest share a word about post-fight etiquette. “The UFC’s Guide to Awaiting a Judges’ Decision” only has two mandates: immediately don your sponsor’s T-shirt regardless of injuries, and DON’T LEAVE THE FREAKIN’ OCTAGON. Dana asks Griffin if he’s “nuts” and offers advice on how to properly flee from victory. Griffin wisely holds off on asking for a raise.

6:00 — The only thing worse than being sober around drunk people? Being sober next to this conversation with White and English middleweight Michael “The Count” Bisping. Just fast-forward 30 seconds.

6:35 — Another great thing about UFC’s vlogs — the guy responsible for bleeping every swear word has been in a coma since 2006. Bisping just dropped four F-bombs.

6:49 — Some priceless banter between Dana and Matt Serra, a former welterweight champ and one of the UFC’s most entertaining personalities. (They should probably consider rigging his future fights for the betterment of the sport.) I’m giving this round to Serra for getting the best of the exchanges, escaping Dana’s clinch twice and ripping off a better “Look at this guy!”

7:29 — Cung Le earned his first UFC victory against Patrick Cote but injured his foot in the process. Now, the 40-year-old is hobbling out of MGM Grand on crutches. Somehow, he works up enough energy to fake-laugh at one of Dana’s bad jokes.

7:46 — Can’t be sure what transpired here, but it appears Dana told Sonnen his favorite movie was Rain Man and added that Qantas never had a fatal crash. Sonnen says he has mixed feelings about the film and immediately tries to change the subject to the Olympics.

8:08 — UFC’s vlog recapping 148 abruptly concludes. It either could have been eight minutes shorter or 88 minutes longer. I can’t decide. One thing is certain — smooth the edges, and the magic disappears.