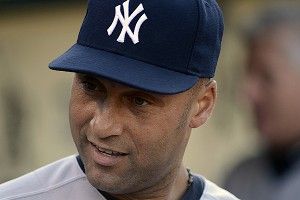 There’s nothing better and more satisfying than a sweep. It felt amazing to take all three versus Toronto, even if tonight’s game was called early for rain. You never like a rain-shortened win, they feel a little bit like cheating, but it was coming down so hard we couldn’t even play that game where the veteran guys ball up some hundred-dollar bills and toss them out onto the tarp and make the rookies slide out there to scramble for them during the delay. Always big laughs, especially when they figure out they’re just one-dollar bills, and they’re all soaking wet for no reason. They learn a good lesson: Don’t be so greedy — you should be flopping around on the tarp like an undignified, drunk seal for the love of the rain-delay game, not for money. Maybe they had parents who put cash prizes at the end of their Slip ’N Slides when they were kids. That would explain a lot.

It was Mark Teixeira Figurine Day, so we had a lot of fun with that. “Hey, Tex, do you need to take it out of the box and let it sit for two months before it’ll hit anything?” “Hey, Tex, do they not know anything about your platoon splits as a lefty? Oof!” and “Hey, Tex, I guess they save Bobblehead Day for guys without alarmingly declining offensive production in the middle years of enormous nine-figure contracts?” No idea who shouted that last one, but (1) I thought I saw Cashman lurking in the clubhouse, and (2) A-Rod immediately got on the phone with his agent to see if he’s getting a Bobblehead Day. I couldn’t hear the whole conversation, but it sounded like he offered to pay for it himself.

The Major League Baseball Players Association has done a lot of great things for us over the years, but they apparently haven’t figured out a way to prevent us from having to fly all the way to Oakland in the middle of July without an off-day. You don’t want to call working conditions like that “inhumane,” because the jet’s pretty decent, even if you wind up sitting near Andruw Jones when he’s using the massage chair and he insists on making that terrible rhythmic “uh uh uh uh uh uh uh uh” moaning noise during the shiatsu mode and that one long “unnnnnnnnnnhhhhhhhYEAH” after the “manual release” cuff engages. You’re just not gonna sleep through that, I promise. Especially when he starts pounding the armrests in ecstasy. If there were an off-day built in maybe at least you’d have the time to get the moans out of your head.

As if tonight’s result weren’t frustrating enough, it looks like we’re losing Gardy for the season. It’s a tough situation. We’ve been fortunate enough to play well with a lot of injuries, and you hate to complain when you’ve still got a healthy lead in a very competitive division, but there’s always a part of you that’s afraid the gypsy streak-bringer has decided to start killing off your teammates because of your diary. You never want to lose people like that. All you can do is stay positive and hope she confines any further hexes to bench guys and Freddy Garcia.

It’s not a curse. Isolated thing, one-run game with a walk-off single, Cody Eppley vomited 10 scarab beetles on the back of the mound in the bottom of the ninth by sheer coincidence. Definitely not a curse.

When you’re on the wrong end of a three-game streak, as Captain you’re always tempted to ask uncomfortable questions. Was the effort not there tonight? It was for me, it’s always there for me, but maybe did a couple of the other guys not bring their A-game? What’s the drug-testing program like in Cuba? You can’t get too bogged down in those kinds of thoughts, but it’s only natural to want some answers, especially about defectors with frankly unbelievable musculature.

The papers will write that a younger, hungrier team is somehow exploiting our “weaknesses,” or that we can’t hit young, strike-zone-pounding pitchers we haven’t seen before. What they won’t write is that Billy Beane has maybe discovered a new inefficiency in the market: black magic. Will they tell the story of the mysterious piles of chicken bones we keep finding in our lockers? Or the 20 dead frogs in the visitors’ whirlpool? The charred photo of Billy Martin left on Joe Girardi’s binder? How did Beane even meet our gypsy? They won’t. They can’t.

The important thing in situations like this is to not panic. Just stay calm and play your game. Even the forces of small-market darkness have their limits. Tomorrow is a new, witchcraft-free day. If you don’t believe that, you’ve already not-won.

I know that Girardi needed to give me a day to rest and clear my head, but that really couldn’t have come at a worse time. The team needed me on the field, and I needed not to be sitting on the bench, unraveling the dark riddle of Voodooball. A ninth-inning homer against Soriano, who’s been automatic for weeks? By Seth Smith? Believe this: Something is very, very wrong in Oakland. My old friend Bartolo pitched against us tonight, and I texted him between innings (he keeps his phone in the dugout to play Cut the Rope).

I knew it. We have to get out of this place before it’s too late. I don’t care how big our divisional lead is.

Before we get into the other big news, I feel like it’s important that I use this personal diary to address a very disturbing and upsetting story everyone seems to be talking about today, even though I don’t know any of the details: If there’s a sex tape out there involving Minka, I’m not a part of it. No matter how long I’ve been involved with a person, I have a very strict no-cameras policy in my homes or wherever I’m staying. My bodyguards check all cell phones at the door, even those sneaky flip phones that look like they might not have cameras, and they give each person an individually numbered Derek Jeter rookie card — the good Topps ones, first printing — at the phone check. Your private life is sacred, you can never be too careful about that. So it’s impossible that even one of the many intimate moments we shared over the years of our relationship would have been recorded in any format. I ask that you respect her privacy at this time, but if you have to go snooping around, you’d probably have to start with Fez — his bedroom’s basically a Digital Playground S&M studio, if you believe the tabloids or any of the troubled actresses with vacant stares who’ve escaped from it. That’s all I’m going to say on the matter. Like I said, I don’t have the details, nor do I really want them.

Anyway, the real big news: We traded for Ichiro Suzuki. No one saw it coming, it’s like Cashman conducts all his trade talks through the CIA. When Ichiro woke up this morning, he was a Mariner, and when he suited up tonight, it was against the Mariners. Baseball’s a funny game that way. People will tell you the guy isn’t the superstar he once was, that he’s a washed-up, 38-year-old singles hitter now, but I tell you this: Don’t sleep on him. Sometimes an aging future Hall of Famer who’s hitting way too many ground balls just needs a change of scenery to get going, whether that’s a rehab trip to Tampa or to a team in a pennant race. That being said, this seems like a little bit of an overreaction to the Oakland series. I told Cash that I’m on top of it. The investigation is ongoing. We’ll be back in New York on Friday and some Stadium gypsies will have some very pointed — but respectful, I don’t want to make things worse and wake up to discover Robbie Cano’s growing a tree branch in the middle of his back — questions to answer about our awful road trip.

And now A-Rod is probably out six to eight weeks with a broken hand after King Felix hit him.

I know we’ve had our issues in the past, but you never want to see an above-average starter go out for two months. At the end of the day, he’s your teammate, and you need him to win, so you’re willing to forget about the stuff that doesn’t matter. The four Mystic Tan technicians always on-call in the training room, the galloping centaur hood ornament on his weekend Bentley, how he always throws in “and let Alex go 4-for-4 with a couple of upper-deck bombs” at the end of the pregame prayer circle, none of it’s important at the end of the day. You just hope we can figure it out and keep the W’s coming while he’s down.

Even if this gypsy is clearly growing in power and hell-bent on denying us a World Series.

She won’t win. I promise you that.