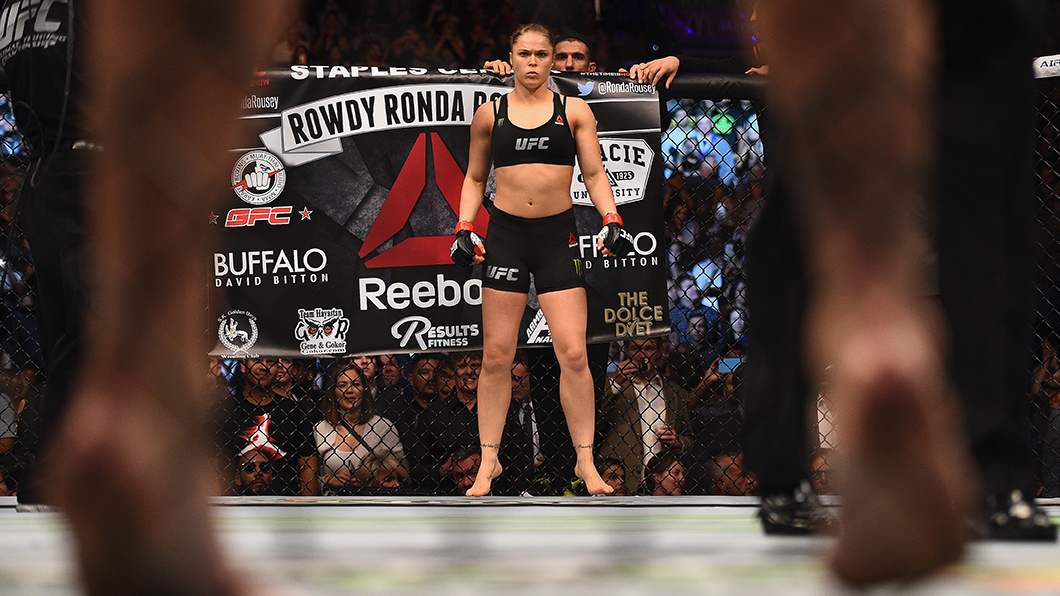 This past weekend, Ronda Rousey defended her UFC bantamweight title against Cat Zingano. Like, she really defended it, taking just 14 seconds to defeat her challenger and improve her record to 11-0. We asked Cheap Heat cohost and Hot97 radio personality Peter Rosenberg to put Rousey’s achievement and her growing profile into context.

The UFC has arrived. After 20 years as a growing entity in the sports world, and hundreds of millions of dollars in revenue, the most brutal combat competition that the legitimate sports world has ever seen has a face. And it belongs to Ronda Rousey.

Hard-core UFC fans are probably ripping through their schmedium Affliction shirts at how insane this thought is. They would of course argue that countless stars have come from the MMA world already — Gracie, Liddell, Ortiz, Jackson, Silva, GSP, Lesnar, and Jones, to name a few. But go ask casual sports fans how they feel about those names and see what the response is. Those are all incredible talents and have drawn big money, but none is a true crossover star.

That’s what this conversation is about — the word “star.” Ronda Rousey is becoming a transcendent sports star. She has the opportunity to make an impact beyond the world of MMA. In many ways, she already is. Parents should be telling their daughters about Ronda Rousey. They should know that there are really tough girls out there just like there are tough guys. More importantly than that, though, they should know that female athletes can sell out arenas.

Ronda Rousey sold out Staples Center this past weekend, and then put on one of the most impressive UFC performances ever. Officially, it was the shortest championship fight in the competition’s history. Are you seeing the big picture here? Men are spending money in droves to watch a woman kick ass. They’re not watching because she’s pretty. They’re watching because she’s a ferocious athlete. Even though her record is only 11-0, she gives off that Mayweather “can anyone ever beat this person?!” feeling. She is must-see TV. Can you remember the last female athlete who was must-see TV for both women and men? She is outdrawing WNBA teams by herself. Hell, she is outdrawing the Lakers in their own arena.

The reason Rousey is such a star goes beyond the Octagon. She has an actual personality too. This is historically a rarity among MMA fighters. It is not a coincidence that Rousey is a huge fan of WWE, a form of entertainment that is a 50/50 mix of athleticism and entertainment. She’s lighthearted and sweet when she’s not destroying people in a fight. She’s funny. She knows how to use social media. She has parts in Furious 7 and the Entourage movie. Did I mention her passion for chicken wings?!

Remember this moment. This woman is going to be a game changer in sports. I’m talking Tiger Woods game-changing. Her biggest challenge moving forward won’t be convincing anyone of her importance, or filling arenas; it will be finding an interesting opponent. At this point, though, it doesn’t matter. Ronda Rousey creates all the interest the UFC could possibly need all by herself.

MLB Risers and Sliders: The Hitters and Starting Pitchers Whose Projections Have Changed Most Since Last Spring