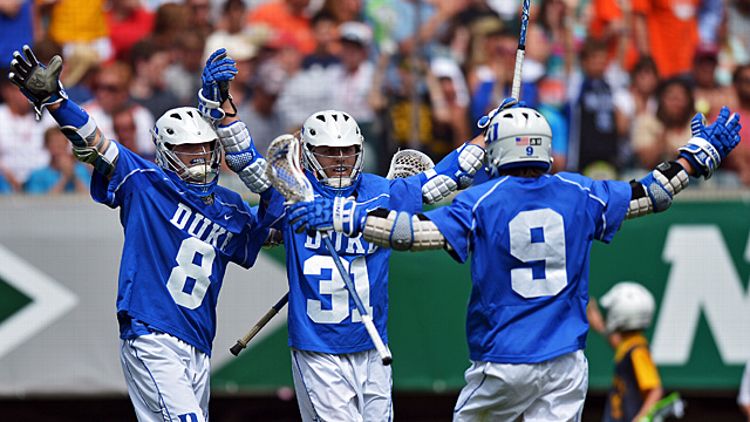 Are you a total lacrosse agnostic who happened to catch Duke making a veritable Cinderella run to the 2013 title this past Memorial Day weekend? Did you enjoy it even though you were just killing time before an NBA playoff game, or at least a point in the afternoon when you felt comfortable enough to start drinking? We can be honest with each other: It probably didn’t make you feel too good about yourself, and not just because it involved Duke winning at anything.

Lacrosse has an unctuous-at-best, sociopathic-at-worst reputation, a reputation that is both earned and somewhat overstated. Even as a recent convert whose white-boy high school didn’t field a team, I’ll fully concede to the outsider view of it as an athletic pursuit defined by arcane rules, arrogance, and elitism — in other words, everything people hate about college athletics combined with everything people hate about the college fraternity system.

The prohibitive economics of lacrosse result in it being pathologically white, with a tiny geographic footprint outside of the Northeast and Mid-Atlantic. And even then, the hot spots and legendary breeding grounds aren’t exactly Rucker Park in terms of swag (i.e., the surrounding suburbs of D.C. and Baltimore, Main Line Philadelphia, Long Island). Beyond that, the majority of the schools participating at the highest level are extremely selective private schools or “public Ivies,” and the same damn teams win every single year. Nine teams have taken home the championship over the span of 43 years, and two of the last three titleholders are Duke and Virginia … and about that … those wins came after each team was linked to the biggest lacrosse-related scandals of all time. Each scandal was extremely horrifying and even if the programs themselves were absolved of any wrongdoing, it didn’t do a damn thing to contradict the idea that men’s lacrosse is a temporary playpen before its participants take their same entitlement and 1 percenter behavior to law school or investment-banking gigs.

So now that we’ve settled all of that?

It’s the best-kept secret of spectator sports. The Duke-Syracuse championship game was lacrosse at its best, something like a manic-depressive version of hockey: physically gentler, but higher-scoring and prone to extreme shifts in momentum. Duke was down 5-0, but eventually roared back to a 16-10 victory largely due to Brendan Fowler winning 13 straight faceoffs, which is worth at least two DeAndre Jordan–on–Brandon Knight dunks in terms of demoralization.

If you spent this past weekend as a “fake it till you make it” fan, you might as well familiarize yourself with the history and culture of each of the teams involved, because lord knows it’ll come in handy next year when they probably make it right back.

As evidenced by Harvard’s ballyhooed one-game run in the NCAA men’s basketball tournament, casual fans love to latch onto the idea of Ivy League schools righting some sort of metaphysical wrong inherent in college athletics. That doesn’t apply so much here, not when Virginia, Johns Hopkins, Syracuse, and Princeton are the most decorated programs. So if you want to frame this one properly, Cornell was a powerhouse in the 1970s that has struggled to get over the hump in the 21st century. Quintessential “they’re due” team.

It’s pretty much impossible to recommend rooting for any Duke team unless you went to Duke, stand to gain a substantial amount of money betting on Duke, or are a blood relative of someone currently attending Duke. And even then, you probably think they’re kind of stuck up.

The picture is complicated here, seeing as how Duke is likely responsible for the last time the nation cared about the state of men’s lacrosse, and not for any good reason. Any sort of faux-redemption narrative is gone, seeing as how it won its first championship in 2010, and took home another three years later.

An upstart program in a relative geographical outpost, Denver is what lacrosse proponents envision as the future of the sport — it made its first tournament in 2006, and if you need any indication of how wild the west truly is in D-I lacrosse, the conference known as the Great Western Lacrosse League included Denver, Notre Dame, Butler, Ohio State, and Fairfield. Which is in Connecticut. Denver was the only participant in the Final Four that had never won a championship.

Other than that, Syracuse has managed to be the name program while keeping its proverbial nose clean. And unlike Johns Hopkins or Princeton, lacrosse isn’t a total outlier in terms of Syracuse’s athletic program. So if you favor machine-like excellence with the occasional glitch, this is your move.