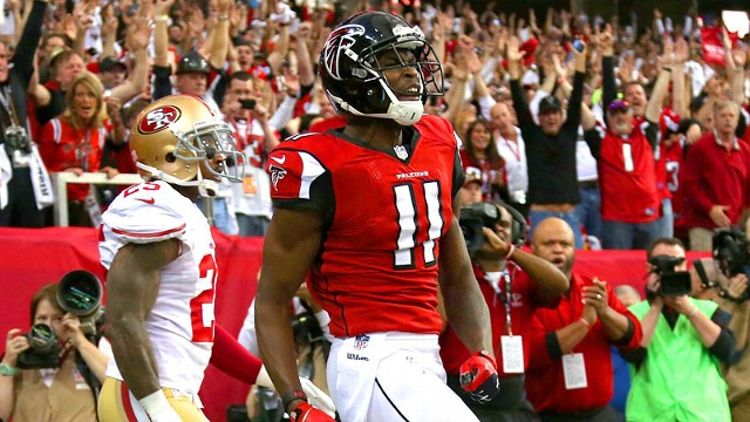 When your team goes 13-3 and has home-field advantage throughout the playoffs, there isn’t much solace to be found in anything less than a championship, but I think for Falcons fans, last year’s NFC Championship Game provided one exception. What eventually got lost (I can’t be the only one who temporarily forgot about this, right?) in the 49ers’ nutty comeback and eventual win was that the most recent game of Julio Jones’s NFL career was also his best. Against one of the best defenses in football, Jones hauled in 11 passes for 182 yards and two touchdowns, the second of which involved him taunting the rest of mankind with a Why? Because I can toe drag.

Jones finished his second season with 79 receptions, nearly 1,200 yards, and 10 touchdowns &#8212 all of which placed him in the top 20 league-wide. The touchdown and yardage totals were good for seventh and 11th, respectively. All of this would seem to indicate that Jones is already one of the best wide receivers in football, and he probably is. It’s just that this season, he should be that much better.

Even in this pass-happy, rookie-quarterback-friendly NFL, the success of most young wide receivers has taken time. Justin Blackmon led all rookies last year with 64 catches for 865 yards. The other three rookie wide receivers drafted in the first round combined for 1,188 yards. A.J. Green felt like a star upon his arrival to the league, but even he barely cracked the 1,000-yard mark, and caught only 65 passes. It took Dez Bryant until Year 3 (and really, the end of Year 3) to become the sort of star the Cowboys envisioned when they drafted him. And although it’s hard to gauge how much Demaryius Thomas’s improvement in his third season was due to his own maturation and how much was due to the arrival of Peyton Manning, a jump of nearly 40 yards per game would still be significant if I had been the Broncos’ starting quarterback in 2011.

Atlanta’s price tag to move up and take Jones — two firsts, a second, and two fourths — was big enough for fans to expect immediate results, but with wide receivers, that expectation just isn’t reasonable. The reward to be found in Altanta’s risk still isn’t apparent, not even after 1,200 yards and double-digit touchdowns. Jones may have hung around the top 10 a season ago, but this is the season when a leap into becoming a 100-catch, 1,400-yard game-changer is very much in play. What we saw against San Francisco may never be the norm, but I wouldn’t be surprised if, soon, it didn’t even make us blink.