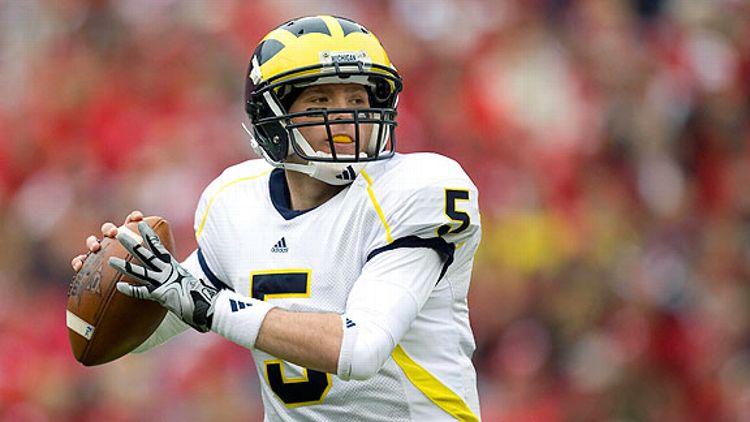 It wasn’t the first time that Tate Forcier bewildered Michigan fans — but it still stopped their hearts.

Wolverine faithful pictured Forcier in green and white, battling his former teammates in a rivalry game that’s finally becoming relevant again. Eventually, though, Forcier offered some clarification. He wasn’t one of those Spartans. No, he would be joining the Spartans of San Jose State.

@Joshontheradio no not at all. SJSU was the right place for me. I am happy with my decision and im excited to move forwardless than a minute ago via web

The move gives San Jose State a high-profile recruit who brings agility and experience to a team that flatlined at 1-12 last season. It might also mean the end of a strange and seemingly desperate journey for Forcier, who has shifted from being a star to being uncommitted as late as last week.

Forcier was a highly touted Michigan quarterback in 2009, a freshmen starter whose performance was patchy but sometimes brilliant. Only the third true freshmen to start the opener, Forcier led the Wolverines to a 5-7 season — up from a 3-9 season that left Michigan fans merely hoping our losses weren’t that bad. (They actually were that bad.) Forcier started all 12 games, and passed for 2,050 yards and 13 touchdowns. He was named to the All-Freshman Big 10 team. But he got too cozy in his starting role. He was unseated last fall by speedy Denard Robinson, who improved his passing game and, according to his teammates and coach, worked much harder than Forcier. It wasn’t long before Forcier lost the fans, too. He sulked on the bench and complained to reporters, even when Michigan was winning. OK, especially when Michigan was winning. While Robinson raced to 197 yards in the season-opening drubbing of Connecticut — the kind of win Michigan fans were starved for — Forcier sat alone, slung a towel over his head, and spent the game pouting.

Forcier could still shine when he got on the field: He went 12-for-12 on pass completion when Michigan beat Bowling Green 65-21, and he completed 54 of 84 passes for 597 yards in his backup season. But if fans like me thought Michigan was building a powerful one-two punch with Robinson and Forcier, they were disappointed. With too many incomplete classes, Forcier was deemed academically ineligible for the Gator Bowl. He left Michigan in January.

So began months of athletic purgatory. In February, Forcier stated a commitment to Miami and signed financial aid papers, but plans fell apart for what he described as family reasons. He was talking with Hawaii in July, but then the school received his academic transcripts. End of conversation. A week later, he announced that he’d join the Spartans. As a transfer student, Forcier can’t play until 2012. He has two more seasons of eligibility.

So has Forcier finally landed? There are reasons to be hopeful: While the Spartans have quality quarterback prospects, including freshman Joe Gray, Forcier, who turns 21 this weekend, has the talent to make an impact on a developing program. He won’t play this fall, so he can adjust to a new team &#8212 and hopefully bump up those grades.

But there’s a concern with Forcier that goes deeper than the uneven trajectory of his career. Back in January, when the door shut at Michigan, he described an emotional beatdown that took him to “rock bottom.” “I’ve been kicked, pushed, knocked down, publicly berated, belittled, emasculated and more,” he wrote on Twitter, later continuing: “There are plenty of legitimate reasons to give up or feel the victim. … I really wanted to stay. I was not giving up on Michigan, but in the end, it was made clear they had given up on me.”

It got scarier in April, when Forcier locked himself in the bedroom of a third-floor apartment and hung out of the window. Police were called and Forcier was hospitalized.

San Jose State has the potential to be the place where Forcier can calm down, work hard, and enjoy football again — and maybe even become a leader for the Spartans team. But it’s going to take more than extra practices to get there.