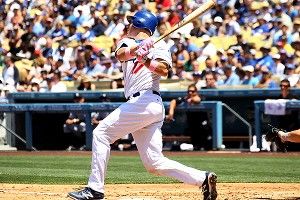 Take one look at A.J. Ellis’s resume, and you can’t help but picture the biggest of underdogs. Ellis was a standout catcher in college … but he played in the Ohio Valley Conference, at Austin Peay (“baseball powerhouse,” he quipped). After staying in school all four years — the kiss of death for a baseball prospect — he wasn’t sure he’d get drafted … until the Dodgers took a flyer in the 18th round of the 2003 draft. He toiled in the minors for parts of nine seasons, racking up only 2,119 minor league plate appearances … because he served as a backup for several years. He finally got his first shot at a full-time gig this season … at age 31, when he may well be already past his physical prime.

Except here’s the thing: A.J. Ellis is laying waste to the National League. After two more hits Tuesday night, he’s now hitting .322/.455/.500, ranking among the 10 most productive hitters in the league to date. Ellis’s hitting binge, combined with Matt Kemp’s recent trip to the disabled list, have elevated the unheralded Dodgers catcher to fifth in the order (from eighth), just behind Andre Ethier. Oh and he’s a one-man meme generator, spawning the Twitter hashtag #AJEllisFacts and a corresponding Tumblr (sample A.J. Ellis fact: “A.J. Ellis plans to donate his body to science so that future generations may learn how to reverse engineer their own On Base Machine.”)

We spoke with Ellis about his journey to the big leagues, his efforts to settle in as an everyday player, and his trademark skill: His uncanny ability to draw walks.

What’s it like to be playing in L.A. these days?

We love it out here. Having gone through the ownership change, there’s some real excitement with that. The first thing they did after taking over was totally revamp the family room, for the wives and kids. Happy family equals happy ballplayers, and they get that. It’s really cool to be a Dodger right now, there’s a real buzz going on.

First place, best record in baseball, but now you guys have lost Matt Kemp for at least a couple weeks. How do you keep winning without him?

It’s going to be a huge hole. Alongside Josh Hamilton, he’s the best player in baseball. One thing that’s come in handy is getting Bobby Abreu, having him hitting in the middle of the lineup, and hopefully having him sustain until we get Matt back. And we’ve got some really good starting pitching this year. You hope they keep you in the game, so that you just to wait for that big hit.

What about hitting fifth instead of eighth with Kemp out of the lineup? Do you have to change your approach now?

Donnie [Mattingly] talked to me when he made the switch, and he specifically said, “Don’t change your approach. Be you, be who you are.” I think that’s all part of the adjustment to becoming a full-time major leaguer. Just becoming secure in my identity, in who I am as a player. In the past I tried to impress people by doing more things than I was capable of. I’m 31 years old, my growing years are behind me. Now it’s about molding, honing my craft, being who I am.

A big part of your identity has been your ability to draw so many walks. How long have you been a walks machine?

Going back to Little League, I frustrated my dad that I would never swing the bat. Even now. On Mother’s Day, he got on me for not swinging at a 3-1 fastball. I’m pretty selective, trying to swing at a certain pitch, so I always ended up with a lot of walks. To me there’s no worse feeling than swinging at 0-0, making an out, and wondering “what if.” Very rarely will I swing at the first pitch or early in the count. Hitting eighth, seeing the full benefit of turning the lineup over, that fit into what my game plan has always been.

I was going to ask if you read Moneyball and had some kind of revelation.

I did read Moneyball, but that was later. I had no idea about the book until ’06 or ’07. When the book picked up steam, people starting telling me, “You’d be perfect for the A’s.” I did feel kind of validated, seeing a team that valued OBP, and the ability to work the count.

Of course pitchers will eventually adjust. With your reputation for being patient, wouldn’t pitchers adjust by throwing first-pitch fastballs right down the middle?

I have noticed that happening, and it does seem that I’m almost always hitting with an 0-1 count. But that never bothered me, even hitting with two strikes never bothered me. More and more I need to pick my spots, though. Especially with runners in scoring position, just not allowing the other team to take that free strike. I’ve also learned just from catching a guy like [Clayton] Kershaw. When someone like that’s on the mound, hitters will often swing at the first pitch, to avoid that devastating stuff that comes later. When we faced [Stephen] Strasburg … I mean, you don’t want to get to two strikes and have to deal with that off-speed stuff.

Since this is your first time as a full-time big leaguer, and catcher being such a demanding position, any concern that you might wear down by the time we get to, say, August?

There’s definitely a lot of wear and tear that comes with being a catcher. I’m 31, but the last few years I’ve been up and down a lot, so I haven’t played that much. There was only [one] year in the minor leagues where I played more than 100 games. I backed up Russell Martin for a while, backed up another guy in Double-A. So I feel fresh. That and having an awesome training staff and strength and conditioning staff.

You’re active on Twitter, seems like you have a lot of fun with Kershaw, some other pitchers too. Does that help your catching at all — not so much Twitter specifically but just having fun, building rapport with these guys?

It’s making sure a guy knows I’m fully invested in him when he pitches. Same thing for when guys come out of bullpen. Hitting, blocking pitches, throwing, all of that will go into slumps. But attitude, how I interact with the pitching staff, I can always keep on top of that.

I have to ask about one specific pitcher, since he’s such a great story. Chris Capuano. Bounces around, two Tommy John surgeries, and he’s pitching so well right now.

Well for starters, he’s brilliant. He always knows what’s going on, watches more video than any pitcher I’ve ever been around. He was pitching last year, but his arm was not fully back. Now it’s all the way back, and you can see it, more life on his fastball, everything. He always had that devastating changeup that he could throw to a righty or lefty. Then in spring training this year he was working with Rick Honeycutt and he finally found a curveball grip that he can consistently repeat. There are not many major league hitters who will swing at a first-pitch curveball, and he does a great job of dropping that pitch in there.

As a first-time starter working with some very good pitchers — many of them very experienced — and also having all that playing experience on the coaching staff, how much of the game do you control, and how much of it is called by others?

I’ve pretty much got free reign. I’m the one calling the game. Rick Honeycutt our pitching coach, I’ve never been around someone more apt at calling a game plan than him. Before every series we talk a lot about what we want to do. Then for every pitcher before every game it’s the same.

And then in ’09 and 2010, I got to work for Brad Ausmus. What this guy did for me was life-changing. He taught me how to catch, how to be a pro, how to attack a hitter, how to match up to pitchers’ strengths, how to prepare. Beyond the baseball stuff, I found we had a lot of similar interests: family, things we liked to do off the field. In 2010 when he was injured, I lived with him all season. I was his chauffeur, at his place in Manhattan Beach. It was an absolute catchers boot camp.