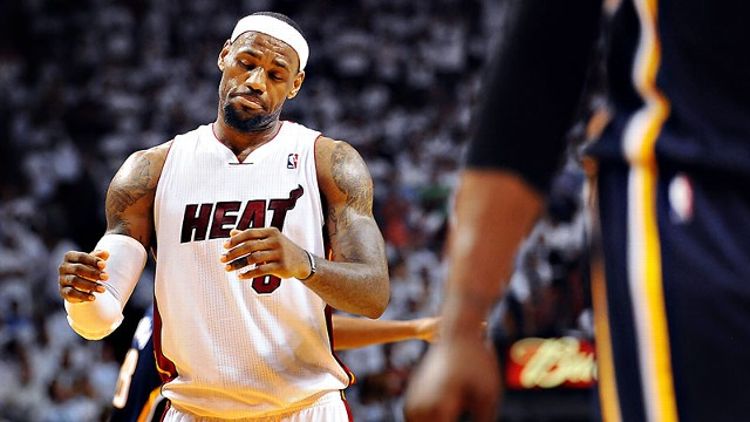 The NBA Playoffs: Where Inept Happens!

And where are your Chris Bosh jokes now, America? Just one night after the flaming car wreck of offensive ineptitude in Boston, we were presented with something truly ghastly. After a graceless first half, typified by their 24 percent shooting and a desperate turn to Dahntay Jones to spark their game, the Pacers bounced back in the third quarter of Tuesday night’s 78-75 win over the Heat. Scoring 28 points — nearly matching their first-half total of 33 — Frank Vogel’s crew of crazy kids got everyone involved by evenly spreading shots among their slew of rangy guards and forwards. The Heat? Not so much. The Big Two (RIP this) plus their band of merry scrubs mostly wilted in the harsh glow of a staggering 20-4 run. The Heat scored just 14 points in the third on three field goals. Yikes. Without Bosh rolling from the high post, the Heat’s spacing was disastrous, compounding a torrent of errant jump shots. For stretches on Tuesday night, there was little to enjoy, just an endless loop of clanged iron — the two teams finished a combined 4-for-31 from 3-point land. And while LeBron and Wade combined for 52 of their team’s 75 points, they were out of sync most of the second half. No other Heat player scored more than five points.

LeBron missed two key free throws in the final minute of the fourth, but the Pacers missed several free throws down the stretch as well. But the final, potentially game-tying shot was left to Mario Chalmers (on a play drawn up by Coach Spo), installing another phony chapter in the breathlessly overwrought “Why Won’t LeBron Step Up?” saga. Bron apparently does not like getting dinged up in the paint with the big boys, and was exhausted at the end of this game. Still, he did not take that shot. Should he have? Probably. The Heat have now given a less-talented but gassed-up Pacers team a chance, and with Bosh out indefinitely, the future of a series that looked like it might not last six games is suddenly a very different proposition. (You’ve got to love David West’s “Get off the floor, we only won one game!” attitude with his too-excited teammates.)

Perhaps the Heat can start with this suggestion: Make the very scary Paul George look like this, not like this.

For two and a half quarters Tuesday night, the Spurs built and maintained the most frustrating type of double-digit lead imaginable. Despite little production from Chris Paul, the Clippers, down 71-61 with 6:54 left, had put together a solid showing offensively. L.A. shot over 50 percent in the first half, and as the Spurs did everything they could to slow down Paul by sagging into the lane and double-teaming off every screen and roll, guys like Caron Butler and Eric Bledsoe were hitting the occasional open jumper that Gregg Popovich was willing to concede. Still, San Antonio had control. Then the Spurs spent the next four minutes showing the Clippers (and everyone else) that if Paul & Co. had ever had a chance, it was probably gone.

Coming out of a timeout with 5:58 remaining, Blake Griffin grabbed the rebound off a Boris Diaw miss and headed back the other way. The half-court offense that followed consisted of a two-man game with Griffin and Randy Foye going back and forth on the wing before Griffin bricked a 20-footer off the front rim as the 24-second clock expired. Diaw proceeded to hit a wide-open 3 from the left wing to make it 74-61.

After a tough 3 from Caron Butler cut the lead back to 10, the Spurs moved into their half-court offense and into what was probably the most beautiful bit of basketball of these playoffs. With Tony Parker dribbling on the right wing, Diaw came to set a screen for Parker to move back toward the middle of the floor. As Griffin helped on Parker, Diaw rolled to the rim. Caron Butler came over to help, leaving Stephen Jackson open in the corner. Jackson received the ball, and instantly moved it to Manu Ginobili, who’d been left open for a 3 after Bledsoe rotated down to help on Jackson. 77-61.

The next two trips for each team weren’t much different. The Spurs denied Paul any opening on the next possession, and Griffin, left alone near the free throw line, turned the ball over looking for DeAndre Jordan on the lob. Then a perfect screen-and-roll between Duncan and Parker coupled with late help defense from Jordan pushed the lead to 15. When the Clips got it back, Griffin was again left alone from 15 feet, and the possession ended with Butler hoisting a contested 25-footer at the end of the shot clock. Ginobili quickly got the rebound to Parker, who found Jackson on the left wing as part of a secondary break. An out-of-control Bledsoe and out-of-position Griffin and Jordan meant two dribbles into the lane for Jackson and another layup for Diaw. Just like that, the game was over. And you know what? For those four minutes, I’m not sure they were playing the same game at all.

The hope for Clippers fans: Paul’s silent Game 1 is an aberration. The problem is that San Antonio’s star point guard was just as silent. If that matchup continues to be a wash, the advantages San Antonio has in every other element of its half-court game (and on its coaching staff) are obvious. The stable of shooters Parker has is what Paul needs. In this series, the superstar power forward is the pick-and-pop 36-year-old. Chess to checkers isn’t even an apt analogy. This is more like time travel and basic addition. And at this point, there isn’t much reason to think that’s going to change.

On the Bright Side: LeBron James and Dwyane Wade Are Good at Volleyball

Looks like somebody’s been taking cues from Maverick and Goose.

I’ve spent a great deal of my basketball-watching life making fun of Tim Duncan. He’s a perfect target for me because I’m almost allowed to tease — because he’s such a winner. If he were a square and a loser, I’d feel like a bully, but he’s one of the best players of all time. Which automatically gives me permission to mock his stoic approach to a highly emotional game. Since Chappelle’s Show, I’ve followed every Duncan-made bank shot with the Prince “Good” celebration and I’ve long imagined that in his head, he says left foot, right foot, left foot, right foot as he runs up the court.

But every now and then, he does something that’s so awesomely Duncan, it reminds me that I actually love him. Tuesday night, he accidentally ran into Blake Griffin. Duncan gave him a slight shoulder to the jaw, causing a Blake overreact whiplash, but instead of pretending like nothing happened, he grabbed Griffin’s jersey, made sure he was OK, and then gave him a fatherly head pat. This was the opposite of the Metta-Harden incident. Here was Tim Duncan, doing his Tim Duncan thing. Usually I’m a fan of attitude, sass, and the drama that ensues on the hardwood, but I was relieved to watch an elder statesmen remind everyone that accidents don’t have to be followed by fists. And to make it all better, his team was up by 10. Classic Tim.

If we told you this was only the second-most discomfiting moment of the night — after Shaq and Barkley stripped down to flash their “new” physiques — would you believe us?