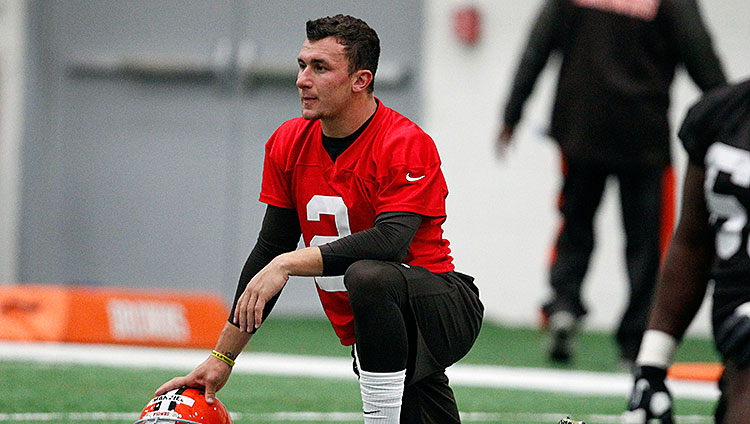 Within 24 hours of being drafted by the Browns, Johnny Manziel had partied with Drake, flown to Cleveland, met with a hungry swarm of reporters, and learned of his top target’s potential season-long suspension. The next few days weren’t much quieter.

Like all first-round draftees, Manziel was obligated to field questions from the media upon being selected. His was probably the only press conference interrupted by an unruly group of fans chanting “JOHNNY CLEVELAND.”

A good friend is there for you in times of need, and after the night Manziel had, he needed to let off some steam. Drake is a good friend.

Apparently, Drake is also morally opposed to cloakrooms. Who knew? Meanwhile, Manziel didn’t even bother changing into a club-friendly outfit for post-draft festivities. Loosen the tie, roll up the sleeves, and turn the fuck up. That sort of versatility goes a long way in Kyle Shanahan’s offense. (Pictured at left is noted Drake hanger-on OVO Ryan, whose role in Drake’s crew amounts to doing the money sign a lot. Good work if you can get it.)

TMZ reports that the party lasted until 5 a.m., and that “the guys had a blast.” Click the previous link if you want to feel horribly inadequate about how you celebrated your entry into the workforce.

Manziel’s introduction to the Cleveland media began thus: “Do you get a sense of what your selection means to the city?” By Friday afternoon, he probably did. Adam Schefter was already tweeting about the Browns’ skyrocketing season ticket sales, Darren Rovell was appearing on SportsCenter to discuss the economic windfall the Johnny Football brand would bring the city, and fans were lined up outside the team’s facility awaiting his arrival, palms metaphorically in hand. So yeah, Johnny had a very acute sense of what his selection meant to Cleveland. Time to focus on more important matters.

Like: “Do you think you can get LeBron to come back?” Which would’ve been a thoroughly risible question, HAD LEBRON NOT BEEN WEARING A MANZIEL JERSEY THAT SAME DAY.

Shane Battier was with LeBron in the training room last night when the Cowboys passed on Johnny Manziel. Battier: "Oh, it was ugly."

LeBron looks to have renounced his Cowboys fandom, and Manziel is represented by LRMR, so anything’s possible, I guess.

More important: “There’s a picture of you online with a bottle of champagne …”

And …? As Manziel smartly countered, it is 100 percent legal for a 21-year-old to be pictured online with a bottle of champagne. Next question.

Employee of the Month

Say what you will about Manziel as a quarterback, he’s been an indisputable boon for workplace morale. To wit: Towson running back Terrance West’s reaction upon being drafted by the Browns, delivered via Instagram. No one in the history of the world has ever been this excited about joining the Cleveland Browns. Until now, that is.

It’s no secret that The Decision effectively crippled Cleveland’s T-shirt economy. Nick Swisher’s “Bro-hio” tees make random strangers want to punch you in the face, Trent Richardson and Brandon Weeden shirseys are clogging the city’s clearance racks, and even Clevelanders have way too much pride to wear anything bearing Anthony Bennett’s name. As such, Northeast Ohio’s T-shirt designers resorted to selling apparel with taglines stolen from yours truly. Dark times, indeed.

However, Manziel’s selection single-handedly ushered in a new dawn for the designers, who are already making a killing. Anyone who’s anyone in Cleveland owns a Money Manziel tee — I bet Brian Hoyer’s even got one hiding in the back of his closet.

If there’s one thing you don’t have to clarify about the city of Cleveland, Jimmy, it’s that it’s not Hollywood. I’m pretty sure Manziel was able to figure that one out on his own. And I’m pretty sure repressing genius is always a bad idea. Would you tell Secretariat to act like a backup?

The Text Heard ’Round the World

On Thursday, Dowell Loggains, the Browns’ uniquely named quarterbacks coach, went on a radio show in Arkansas and gossiped about texting Manziel during the draft. Specifically, he claimed that Manziel sent him a message that read: “I wish you guys would come get me. Hurry up and draft me because I want to wreck this league together.”

WRECK. THIS. LEAGUE. I am trying hard to control my emotions, and I am failing.

Loggains instantly forwarded the text to head coach Mike Pettine and owner Jimmy Haslam. “Pull the trigger, we’re going up to get this guy,” said Haslam, sounding like a guy who couldn’t believe someone actually responded to his m4w posting.

From here, a narrative emerged that Haslam ordered GM Ray Farmer to trade up for Manziel, which conveniently ignored the fact that Loggains also said Manziel was the top-rated quarterback on Farmer’s board (“it was Johnny’s name at the top of the list, and then there was everyone else”). And if Haslam was gonna order Farmer to draft Manziel, wouldn’t he have done so at no. 4? After all, there was no reason for him to think Manziel would be available in the 20s. Haslam’s words were likely more inspirational than anything.

To the extent that Loggains deserves criticism for his candor, the Browns can handle that in-house. Me, I’m just happy the phrase “wreck this league” is in our lives. Try using it in everyday situations — you’ll feel unstoppable.

In advance of this past weekend’s rookie minicamp, the Browns announced that national reporters were barred from the event. Most members of the media took this in stride, understanding that (a) it’s perfectly reasonable for a football team not to want the entire Fourth Estate at a May walk-through, and (b) rookie minicamps are mostly meaningless anyway. The New York Post’s Bart Hubbuch was not one of those people.

Thankfully, some locals were on hand to document Manziel’s first practice as a Brown. The raw footage will leave you speechless:

According to reports, “Manziel threw three swing passes, handed off a few times, and stretched.” In addition to being crisp, gorgeous spirals, all three swing passes were completions. Tell me again why First Take wasn’t allowed to broadcast live from this thing?

Ladies and gentlemen, ballers and ballerinas, I present to you the song of the summer:

Johnny Football. Johnny Cleveland. Get with it or get lost.

#HotSportsTakes: There’s No True Love in the LeBron Era