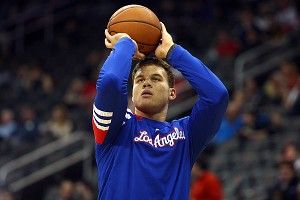 With a little less than 10 minutes remaining in the third quarter of Thursday night’s fun-but-sloppy Staples Center game between the Clippers and Suns — with Los Angeles up by 10 and the Suns with the ball — Blake Griffin mugged Jared Dudley.

Knocking the ball loose, Griffin ran through Dudley and took off down court. Despite the whistle blowing for a loose ball foul, Griffin kept going, throwing himself an alley-oop off the backboard and nearly following through with a tomahawk dunk.

As Griffin slowly, silently, stalked back up the court, hands on his hips, I caught Phoenix’s Robin Lopez, sitting on the Suns bench, staring at Griffin, saying something to a teammate, and smirking. It was the kind of look that could only mean one thing: What a dick.

I might be reading way too much into things, and I admittedly have let my lip-reading license lapse, but I don’t think I’m too far off. When Markieff Morris banged on Griffin to end the first half, the Suns bench erupted. Sure, they were happy to see the rookie get his. But they also seemed happy to that he did it against Griffin.

After I noticed Lopez laughing at Griffin, something funny happened. Over the next few minutes, I started to wonder if he might be right.

First off, let me just say that some of my best friends are dicks. I am probably a dick. Blake Griffin is obviously a humorous person and a phenomenal athlete. And going by the numbers, Blake Griffin had a very good night — 25 points, eight boards, four assists. But, ignoring the numbers, he looked miserable. And his misery certainly didn’t help the Clippers, as they blew what was at one point a 17-point lead to lose, 91-87.

The moments following that aborted self-alley-oop were key in the game. About a minute later, Griffin drove on Channing Frye, tried to create space by leading with his left forearm, and was called for an offensive foul.

This bothered Griffin to no end. First he stared down the referee, Scott Foster, offering some constructive criticism to him as he walked down the other end of the court while palming the ball, despite the fact that Foster asked for it back to start the game again. Cue another whistle, this time for delay of game. Cue more staring. Cue Chris Paul trying to calm Blake down.

But that’s the thing: Blake is calm. He doesn’t chirp like Paul or bellow like Kenyon Martin. He just stares. He stares when he gets fouled, he stares when puts people on a poster, he stares when he’s on the bench and “Party Rock” is playing for the third time that quarter.

That stare can be equal parts intimidating and show of absolute focus. But on Thursday night, it looked like petulance; like the court should be nothing more than a runway for his gravity shattering slams and everyone else needed to get the message. Griffin just seemed annoyed, the Suns seemed to know it, and they used it against him.

With 8:45 remaining in the third, Gary Zielinski gave Griffin a tech. The crowd booing, Paul herding Griffin away, a 10-point lead looking small, the Clippers letting a game they should have been dominating get way too competitive.

After a Butler jam just seconds later, Griffin stood over the loose ball, preventing Sebastian Telfair from picking it up to get the inbounds pass. Telfair gave Griffin a shove and got T’d up, himself. As the Clippers took their free throws, Telfair loudly mocked Griffin for wasting time. The Suns were not scared of Griffin, or his team.

Griffin sulked for the rest of the game, despite shooting the ball fairly well. He didn’t look like a star, or a leader. He seemed more concerned with what calls he was getting than the Clippers’ diminishing lead.

Why he was in such a hurry to get those calls is beyond me. Griffin’s free throw shooting is becoming a major issue; he’s shooting 55 percent this season and it has become a hurdle he must leap if he wants to truly be considered a franchise player. Suns coach Alvin Gentry seemed well aware of this. With minutes left in the game, to the dismay of the Staples Center crowd, Gentry ordered up some Hack-a-Blake, forcing Griffin to the line.

The move seemed vaguely unsporting but it certainly worked. The Clippers offense was thrown completely out of whack. This little bit of trickery jamming up their high-flying, physical attack. Most of all, it broke up the team’s focus, culminating with Sebastian Telfair stealing the ball from Chris Paul with seconds remaining to seal the game.

After after an hour-long postgame team meeting, Griffin talked about the way the team lost, about their lack of urgency. “We’ve got a good team and we’ve got to do better,” he said.

That’s true, and Blake’s a good player. But the Clippers key off of him. He has to better, himself.