2-0: The U.S. Women Exorcise Their World Cup Demons in the City of Saints 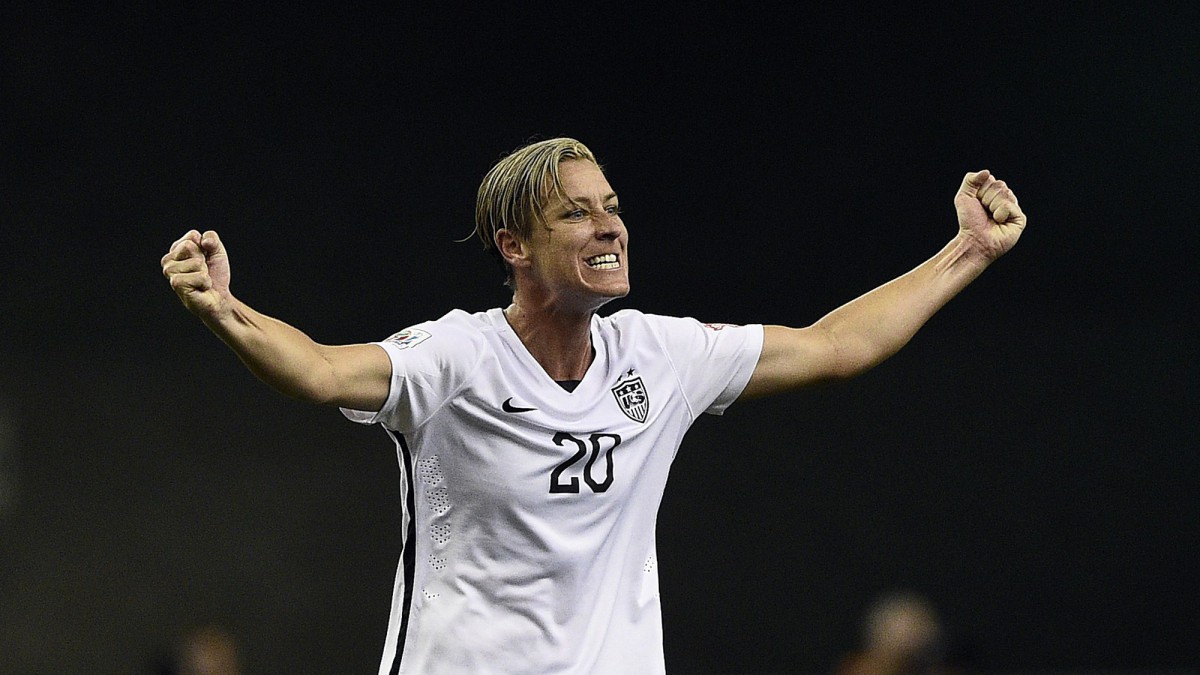 If you’re in the market for discarded chairs and unwanted dressers, I suggest you hurry on up to Montreal. All along the residential side streets just off the various main drags — with their sinful bakeries and efficient, indulgent delis and thankfully omnipresent bureaus de change — garbage bags and pieces of once-loved furniture decorate the sidewalks, slowly rotting in the summer rain. You can see several-story staircases right behind the orphaned items; you can understand the effort that this abandonment required.

For most Canadians, July 1 is Canada Day: a day of leisure, of sitting back and watching Bob McKenzie discuss the opening of NHL free agency on TV. But for the citizens of Montreal, July 1 is Moving Day, and the people aren’t just watching athletes uproot their lives for greener pastures; they’re carrying out the process themselves.

For reasons once based on practicality that now linger out of a sort of nostalgic stubbornness — yep, sounds like Quebec — July 1 has long been designated in Montreal as a communal day of relocation, of taking inventory of your possessions and sorting what you need from what you don’t and getting the keys to a new apartment or lease on life. And this atmosphere of moving on, of not looking back, sure must be pervasive: Last night, on the eve of this upheaval, its spirit even managed to permeate the Women’s World Cup. 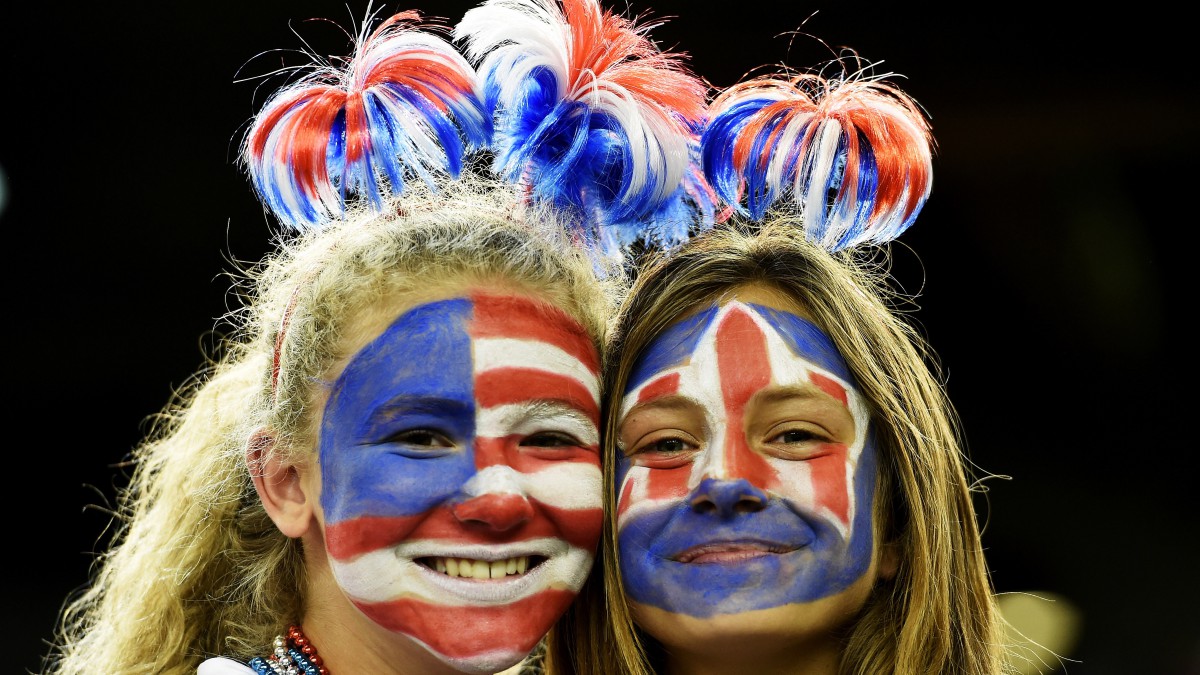 “This is gonna be a lot of sad people later,” remarked one pessimistic U.S. women’s national team diehard as he glanced around the “Fan Zone” set up outside Montreal’s Olympic Stadium in advance of Tuesday night’s semifinal match between the USA, the tournament’s no. 2 team, and Germany, its no. 1. All around us were happy Americans in stars-and-stripes leggings and Alex Morgan jerseys and red-white-and-blue false eyelashes and Uncle Sam hats. They had driven up from Connecticut and flown in from Salt Lake City. If they’d had tails, they would be wagging. We regarded them with gloom.

His remark was of a piece with much of the chatter I’d been hearing since I’d arrived in Montreal. The Germans were simply tactically superior, I was informed when, ignorant and chipper, I asked for pregame predictions. The Americans were doomed. USA coach Jill Ellis was too stodgy; her lineups were all wrong. Abby Wambach ruled the roost as a self-interested dictator; the signs were clear.

Maybe the score would be 2-1, or maybe it would be 3-0; either way, the Germans would advance, and Team USA would go home, and it would all be indicative of the systemic issues plaguing the women’s U.S. Soccer program. I’m not lying when I say that at one point the word “sheeple” was said to me with a straight face in regard to optimistic fans.

One fan told me she was torn: She wanted the U.S. to win, yet she didn’t want its faulty process to be rewarded. It was heavy stuff, a far cry from the upbeat and patriotic marketing that had constituted the bulk of my previous exposure to the team. (The night before the game, I went to U.S. Soccer’s “FanHQ” party, which was basically a nightclub populated by 12-year-olds and their parents. People did the Cupid Shuffle with zero self-consciousness and responded enthusiastically to an “I BELIEVE THAT SHE WILL WIN” prompt by the DJ. Like the $4 cup of water I got at the cash bar, it was both grotesque and refreshing.) It was also the kind of talk that you routinely hear about men’s professional teams and don’t think much of. I decided to consider the second-guessing and the preemptive woe as a sign of progress and true buy-in.

An hour before the game, though, the mood lightened: The lineups had been released, and Wambach was on the bench. She hadn’t started in the quarterfinal game against China, either, but most assumed — based in part on Ellis’s suggestion a day earlier that “winning the aerial battle” would be important in Tuesday’s game — that she’d be back, crowding out more dynamic and explosive options. Instead, Ellis’s lineup featured just one true striker, Morgan, and implemented a flexible, midfielder-heavy formation that left even my naysaying pals upbeat.

I took my seat inside Olympic Stadium — the blobby, quilted roof and the bright-ass lights combining to make everything feel like a particularly trippy circus — and, surrounded by dads and daughters, finally allowed myself to feel some hope. 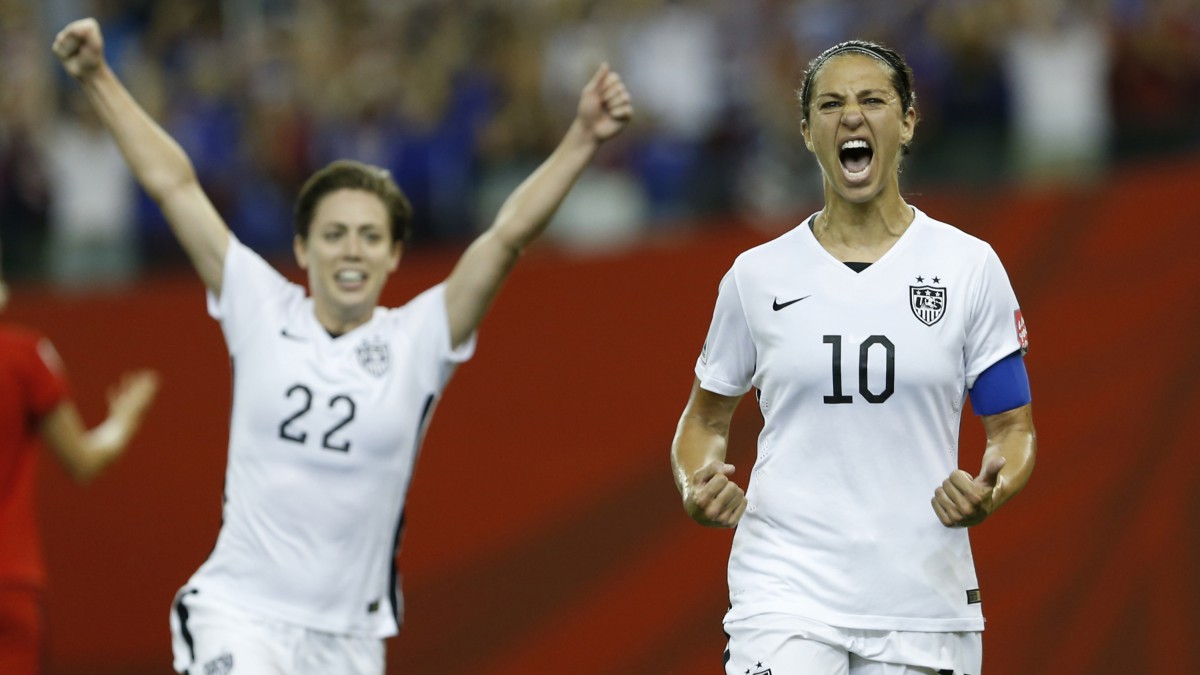 Being inside a particularly biased arena is like growing up in a particularly biased household: You create your own realities and it’s not entirely your fault. When U.S. defender Julie Johnston was yellow-carded for putting hands on Alexandra Popp in the box about 14 minutes into the still 0-0 second half, the crowd screamed in displeasure and disbelief, and I believed both emotions to be valid and true.

The big screen on one end of the field showed zero replays of what had happened, and it had happened far away from me, so for all I knew the ref had botched the call and given a gift to Germany in the form of a surefire penalty kick. Later, when a rare ray of Internet penetrated the Olympic Stadium roof and my Twitter finally updated, I learned that not only was it actually a penalty but that the color of the card should probably have been red.

The German team had yet to miss one of these opportunities, and the crowd fell silent. An older Richard Dreyfuss doppelgänger wearing a T-shirt boasting a giant stuck-out tongue painted like an American flag and a hat that said BROOKLYN was pictured on the big screen looking stricken. The United States had mostly dominated play throughout the first half, and arguably should have been leading but for a golden chance by Morgan that was swallowed up by aptly named Deutsch goalie Nadine Angerer. (“She had the entire goal,” a guy behind me who must be fun at youth games lectured to his daughters, “and she did what you guys do: She kicked it right at her.”) And now the ball was at Celia Sasic’s feet — now this.

Goalie Hope Solo, with that deliberate, Serena Williams–style nonchalance — so infuriating, so brilliant — took her sweet, sweet time sidling toward the goal, icing the kicker with her glacial pace. Sasic missed the net entirely, raising her hands up to her head in frustration pretty much the moment the ball left her foot. If you were in the concourse buying popcorn, the resulting “thunderclap of noise,” as Philly.com’s Jonathan Tannenwald put it, would have led you to believe the U.S. had scored a goal.

About eight minutes later, the U.S. did. Morgan dove over the 18-yard line like a running back striving for a first down, and the whistle blew, and a yellow card was awarded. Carli Lloyd took the line for a penalty kick and the U.S. took the lead. Every time one stands up and sits back down, the seats at Olympic Stadium slam shut and then slam back open. In the first half, that had been the repeated sound effect of anticipation followed by disappointment, thousands of mechanical welps. After the goal, it sounded more like a gladiator arena full of Game of Thrones–size giants clapping in delight.

Once again, it was only later that I would see the replays and realize that the inside-the-box spotting of the penalty was at best an iffy call. 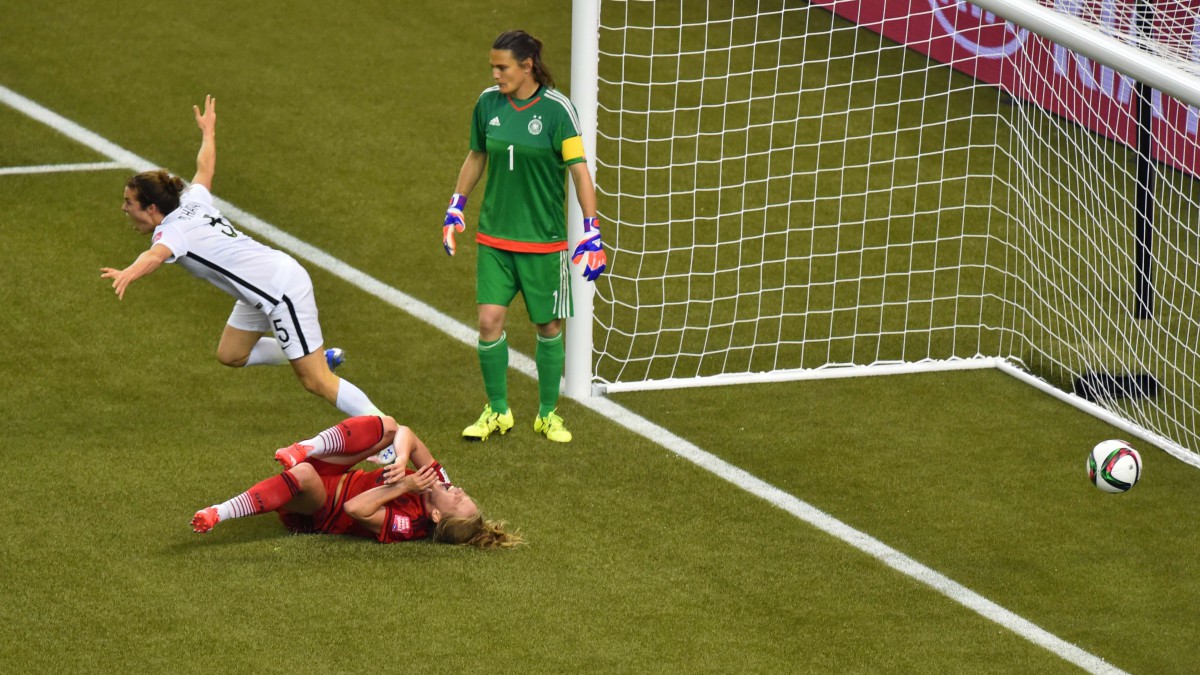 In the 75th minute, Ellis substituted in Kelley O’Hara for Tobin Heath at midfield, one of many moves on Tuesday night that earned a curt nod of approval from even her harshest critics. Nine minutes later, a gorgeous pass from Lloyd across the goalmouth was knocked in with a flying karate kick by O’Hara for an insurance strike, and despite a few late efforts by the Germans, the game was effectively sealed.

Adjacent to Olympic Stadium is Montreal’s botanical garden. This time of year the stunning, fragrant lilacs have all dried up, but the acres of roses are in full bloom. At the whistle, Megan Rapinoe ran on the field and picked up Becky Sauerbrunn, the unsung defender whose steady vision and calm presence is what allows a looser cannon like Johnston to do her thing, like a tree that prospers in the shelter of another.

Morgan Brian and Johnston hugged and held each other at arm’s length, two of the team’s young and promising difference-makers screaming into each other’s faces, while behind them fans with flags (including a couple of rainbows) draped their happy bodies so far over the restraining wall that it’s a wonder they didn’t plummet.

Wambach, who had finally been subbed in at the game’s 80th minute, ran rampant through her teammates like a mama bear, tousling heads and shaking shoulders. It’s a role for which she’s simply best suited at this late stage of her undeniably incredible career. And somewhere out there in the surrounding city, on the night before Moving Day, people surveyed the scenes in their apartments. They made the tough decisions about what to pack and what to haul out to the curb to be scavenged by thrifty students or spirited away in garbage trucks as U.S. Soccer fans packed their bags for the final in Vancouver. There’s always something next.

“Does this spark joy?” is what trendy Japanese organizational expert Marie Kondo says to ask yourself about each item in your home. If the answer is “not really,” you’re supposed to thank it sincerely for its service and walk away without ever turning back. It is nothing personal, truly: That sofa on the sidewalk lived a good life, that bedside table was a trusty and entirely nonjudgmental longtime companion. It will be hard and weird to live without them, but it will be better, too. It was time for them to go, because life goes on.