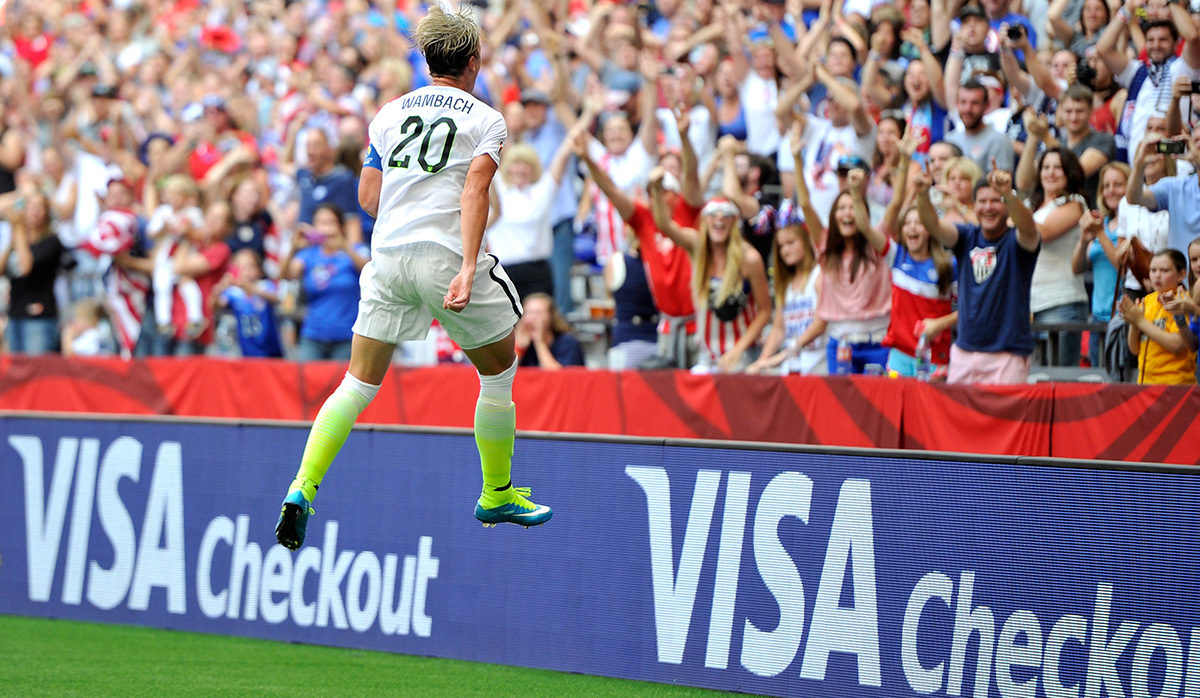 In American sports, as in American life, winning changes your character without changing your character. It can’t alter who you are, but it can upgrade all of your adjectives. A flamboyant showman hits the shot that a selfish ballhog misses. A relentlessly competitive leader is a bully plus a touchdown drive. Some of this is the nature of sports, which is a business of what works; some of it is human nature, which always wants to see success as a vindication of inner qualities.1 The real link between character and accomplishment is often dim and hard to articulate, but we find little parables everywhere. To inspire, all you have to do is score.

Before the Women’s World Cup started, it was easy to see Abby Wambach as a player with a tragic flaw. The ruthless determination that helped her become one of the best forwards in the history of international soccer — powerful, dynamic, unstoppable with her head at the end of a long cross — also blinded her, at 35, from knowing when to clear the way for the next generation of stars. Unshakable self-belief can make you great as long as your talent justifies it, but when you lose a step, it makes you a liability. Last year, a widely reported rumor blamed a revolt among USWNT veterans for the firing of then-coach Tom Sermanni, whose emphasis on younger players had unsettled the old guard. Wambach denied it; either way, the squad assembled by Sermanni’s replacement, Jill Ellis, came to the World Cup trailing a faint tinge of controversy.2

There were also the criticisms from longtime fans. The team was tactically outdated. It was built around a long-balls-and-headers approach that catered to Wambach and familiar, marketable teammates like Alex Morgan, as if the World Cup were a nostalgia tour for the 2012 Olympics. For all of its attacking talent, the squad looked rough-hewn and kludgy in an era of increasing technical sophistication in women’s soccer. It was predictable. It was awe without shock. And fairly or not, much of the blame for this was laid at the feet of Abby Wambach — who was never great with her feet to begin with. 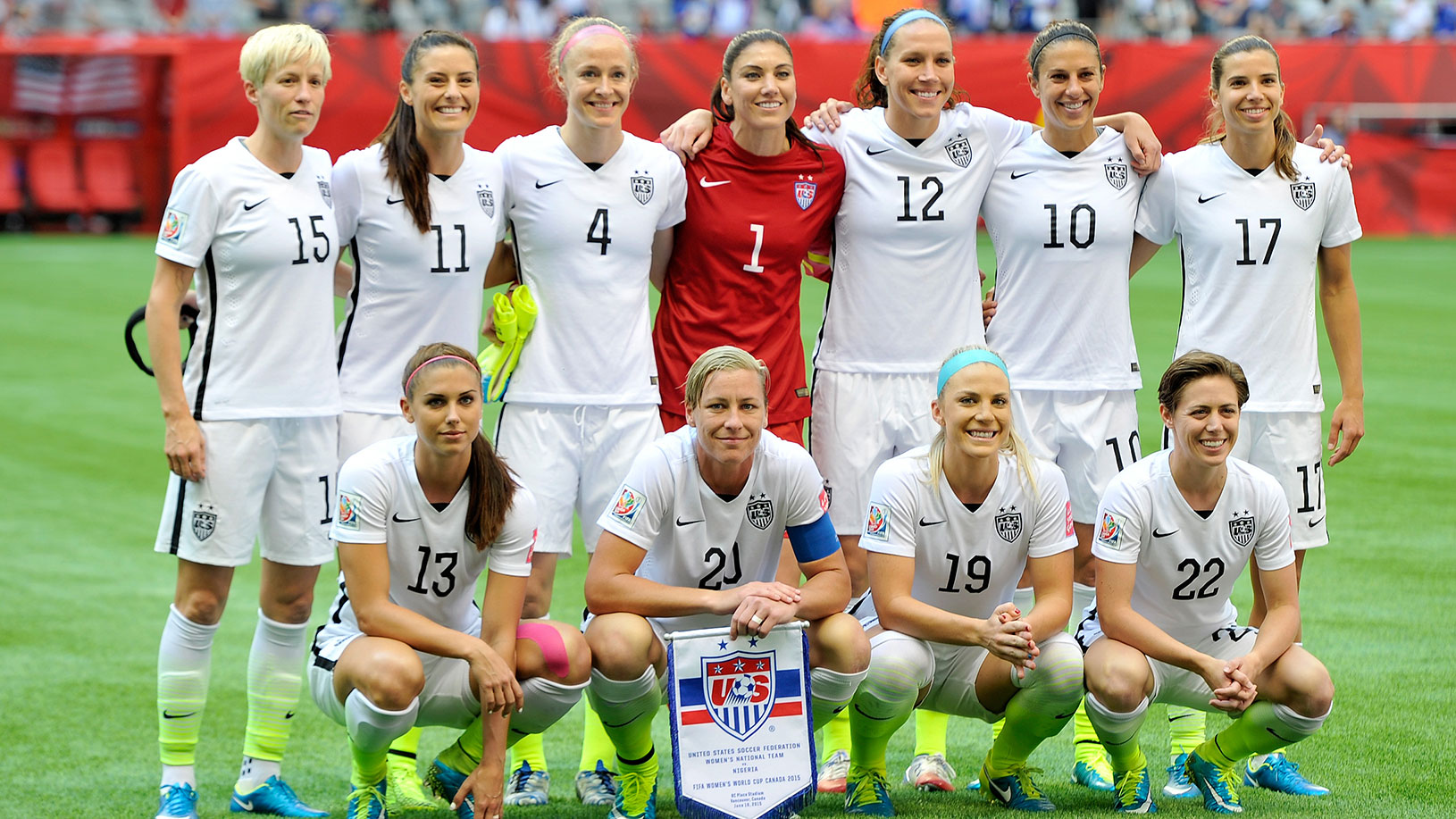 No one has ever, in the entire history of soccer, built a national team that satisfied everyone, and the challenge is especially acute for a coach of American women at the World Cup. The supporter base is too maddeningly split. Casual fans, who tune in once every couple of years for a feel-good story and a montage starring Brandi Chastain, want to see faces they know and remember. Diehards, who can sketch Morgan Brian’s favorite cleat pattern, want the team to evolve and adapt. Casual fans, not prone to checking Algarve Cup results, mostly don’t know the extent to which the rest of the world has caught up with American women’s soccer. Diehards worry about it in their sleep. Since the attention that comes with a World Cup is a chance to build the sport, the U.S. Soccer Federation has to indulge casual fans at least to some extent; this gives legends like Wambach enormous power within the team. But the attention comes to fruition only if the U.S. wins, so in periods of transition, the anxieties of serious fans take on a double urgency.

At first, in Group D play, the anxieties seemed justified. The Americans looked straightforward and listless in a 3-1 win over Australia on June 8 that was closer than the score suggested; afterward, the Australian FA posted a weirdly triumphalist article that argued “the USA, well, they just aren’t that good.” This was a ridiculous move for all sorts of reasons, but the specific critique — that the U.S. was “short of ideas” beyond “play it long and look for the head of Wambach” — was essentially identical to what the most vocally dissatisfied core of American fans had already been saying. Wambach came off the bench late in the USA’s 0-0 draw with Sweden last Friday, a midfield quagmire in which the team again failed to look particularly sharp. It was better with her than without her, but she missed a potential game-winning header, and she’d already missed two good chances against Australia. Afterward, she blamed the tournament’s artificial turf for making it harder for her to score. She made a pretty good case,3 but under the circumstances it didn’t do much to dispel the image of an out-of-touch Wambach grimly battling her way toward semi-futility, with her team along for the ride.

Then, against Nigeria on Tuesday, this happened.

It isn’t quite a classic Wambach goal. To see one of those, you can go back to her most famous strike, the literally-beyond-the-last-second header she scored in the 122nd minute against Brazil during the 2011 World Cup, sending the match to penalties and the team, eventually, to the final. There, in the last desperate moment before the U.S. crashes out in its worst World Cup finish ever, Megan Rapinoe bombs a 45-yard cross into the box. The defense comes a little undone. Wambach is the only person left in the stadium who isn’t panicking. She slips behind the last defender, lines up the header, and knocks it in from the center of the force field she seems to generate around herself at big moments. 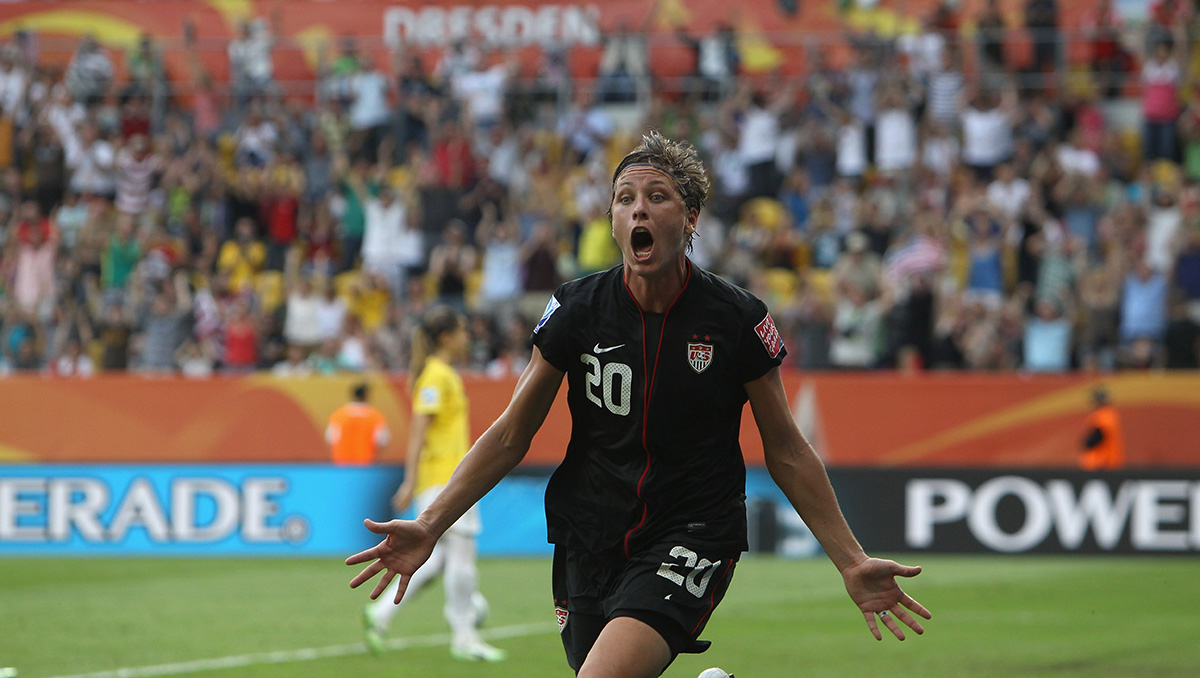 Wambach after her miraculous goal against Brazil in the 2011 Women’s World Cup.

Against Nigeria, the goal is less calm, less perfect. There’s no force field. Rapinoe — of course it’s Rapinoe — loops in a corner kick, and Wambach, jogging forward through a knot of other players, gets to the ball at an awkward angle. It’s too low for a diving header and too high for a roundhouse volley, so her only option is to do a kind of Pepé Le Pew skip-hop and whack it off her left foot. The goalkeeper is caught looking. The ball hits the back of the net. Wambach peels off in celebration. And just like that, the U.S. wins its group.

Winning changes things without changing them. The American performance against Nigeria wasn’t much better, overall, than against Australia or Sweden. It was an expected victory, the world’s second-ranked team against its 33rd, and the U.S. wasn’t overwhelming, even after Nigeria went down to 10 players when Sarah Nnodim was sent off. But from the top of Group D, the context looks subtly but distinctly different. Instead of having failed to find its form, the USA has taken care of business. Instead of having struggled, the USA still has its best game ahead. What looked like tactical ossification a few days ago now feels like careful flexibility — after all, Ellis adjusted to start the hyper-quick Sydney Leroux and Christen Press against a slow Swedish team, then went back to Wambach and Morgan to attack a Nigerian side that has trouble defending set pieces. Nothing is different, exactly, but the tone is easier. The optimism around the team isn’t at Mia Hamm poster levels yet. But it’s real.

And for Wambach, the goal starts the download progress bar moving on a redemption narrative that 95 percent of casual fans will never know existed. (And that maybe shouldn’t have to — the fact that I feel compelled to add that caveat being another example of the potency of the goal.) It’s hard to accuse her of standing athwart progress when she’s the reason the U.S. is progressing. She’s already the leading goal scorer in international soccer history. Now she’s also one goal behind Marta in the all-time World Cup scoring list. Say she takes over first place at this tournament — how many people would call her stubborn instead of driven? How many people would talk about anything other than her resilience, her courage, her fire?

Well, we should always talk about those things, because Wambach is an astonishing soccer player, one who’s spent more than 13 years at the international level punishing opponents in the penalty area from a little patch of grass. And I also don’t mean to make too much of one goal. The real test for the USA will come in the knockout games, starting against Colombia on Monday. (Yes, that Colombia.) But it’s fascinating to see how small shifts in circumstance can change the whole set of terms through which the team is interpreted. This is especially true in soccer, where the decisive moments are both very few and very decisive. A ball arrives a split second earlier or later, an angle breaks two degrees left or right, and on that difference you are either a champion or a loser, and on that basis your innermost qualities are judged.

There’s nothing new about that observation in sports. But because the terms surrounding U.S. women’s soccer are always so complex and so doubled — thanks to the legacy of 1999, the split in the fan base, the uphill climb faced by women’s sports in general, and every other factor — the identity and destiny of the entire program can seem to turn on one moment, one goal, in an amazingly transparent way. Is the balance right? Are we winning? Are we selling shirts? Are we inspiring girls? Are we the best in the world? So often, all of those questions come down to this: Did Abby score?

So forget records. You can measure her influence over the national team by the way she absorbs its semantic potential, which may be the definition of a player being bigger than the game. No athlete can reach that level without possessing an almost magical power. But then, what’s magic? She’s scored 183 international goals. In sports, magic is the word you use for something that’s too effective to be called anything else.

‘Jalen and Jacoby’: Talking Warriors With Too $hort, the LeBron James–David Blatt Relationship, and More