Love Is a Playing Field: Cuddling Up With Julie Johnston and Zach Ertz at the Women’s World Cup 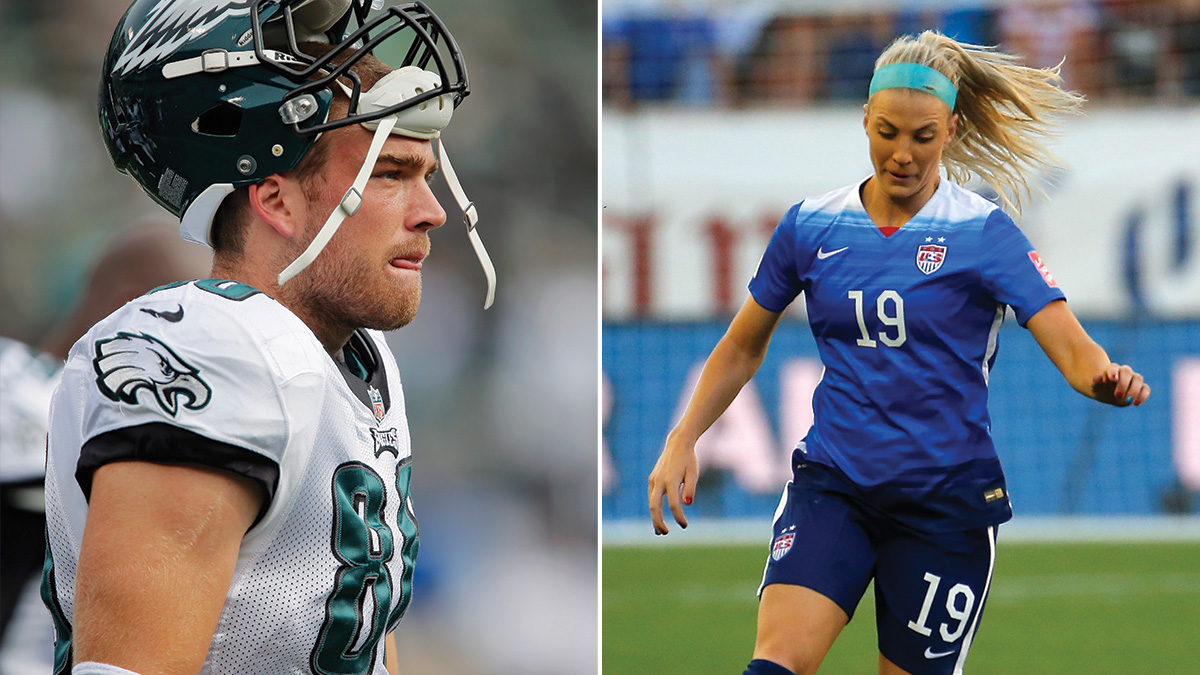 “It gets heated a little bit,” Ertz said earlier this week in the lobby of an Edmonton hotel, a bit of a smirk creeping over his face. (You could just hear the Wild Draw 4 cards being slammed on the table.) “We kind of have to go our separate ways and cool down.” The couple of more than three years competes “at everything,” he said. Not exactly surprising, considering their chosen professions.

Johnston, 23, and Ertz, 24, met when they were both in college — she was at Santa Clara University, he was at Stanford — hanging out in the stands at a Cardinal baseball game. They saw each other in between workouts and exams, after games and before road trips. And for both of them, the years since have been a whirlwind of achievement, of advancement, of finding a foothold in (and on) their respective fields.

Ertz, a 6-foot-5 tight end described as a “versatile offensive weapon” in scouting reports, was a collegiate All-American who set school records at his position for yards and receptions and was drafted in the second round by the Philadelphia Eagles in 2013. Johnston, 5-foot-7, racked up all sorts of accolades at Santa Clara and not only made the roster of the winning Under-20 Women’s World Cup team in 2012, she was named captain, and earned the Bronze Ball as the tournament’s third most outstanding player. Playing for the Chicago Red Stars of the National Women’s Soccer League, she was named 2014’s Rookie of the Year.

This summer, playing for a Women’s World Cup team that faces China tonight in the single-elimination quarterfinals, Johnston has emerged as one of the team’s most promising and compelling players. On a squad that has struggled to generate the offensive firepower that has for so long been the key to its success, she has helped anchor a defense that has given up only a single goal thus far. (Against Colombia on Monday night, goalkeeper Hope Solo scarcely saw any action in a 2-0 win.)

“Julie, you have the face of an angel and you tackle like an absolute beast,” one reporter told Johnston, following a World Cup tie with Sweden. And it’s undeniably true. In the U.S. team’s 1-0 contest against Nigeria, Johnston thwarted a breakaway by Nigeria’s Desire Oparanozie and was named Player of the Match. Perhaps some of Johnston’s defensive prowess comes from being inside the head of her attackers: When she was younger, she played both forward and midfield, and even now, on the national team, she is an integral part of set pieces. Ertz gets a kick out of seeing her white-blond ponytail streaking back down the pitch during changes of possession — past the forwards, over the 50-yard line, all the way to the backfield.

And yet, despite all of this, Johnston nearly missed out on being part of this team. Last fall, she was not selected to the American roster for a World Cup qualifying tournament that in many ways was a tryout for this summer’s squad.

“Everyone’s gotta deal with adversity,” Ertz said. “Her not being called to the camp, looking back on it, was probably a blessing in the long run because it probably allowed her to sit back and say, hey, I’m not where I need to be, here’s all the things I need to work on.” In an interview with the New York Times, Johnson echoed Ertz’s assessment: “I don’t think I really understood what it took to be at that level. I wasn’t a professional yet.”

Ertz, whose own approach to playing football is as mental as it is physical — he is fluent in the 10,000-hour rule and reads biographies of Steve Jobs and Richard Branson in his spare time — said that there are similarities between how he and his partner approach their games. Both are ruthless about their own deficiencies. After seeing his playing time cut by the Eagles last season, Ertz has spend the summer focusing on improving his blocking and seeking out mentors for advice.

A dinner with former 49ers safety Ronnie Lott this winter led Ertz to ring up retired Cowboys offensive line coach Hudson Houck — “the guru of blocking” is how Ertz described him on his blog — and the two spent several weeks training in San Diego. And on a whim, he “cold-texted” Tony Gonzalez to see if the former Pro Bowl tight end might be willing to meet. “The worst thing that could happen is he would say no,” he said. Gonzalez said yes, and the two met for a long lunch. (It was Gonzalez who recommended that Ertz read up on Branson.) Just as Johnston is a player useful on both sides of the ball — and she may have even more running to do in tonight’s game against China, with the U.S. down a pair of midfielders due to yellow-card suspensions — Ertz wants to be a guy whose number can be called on every down.

“[Julie and I] both have the same mentality. We want to get better in everything,” Ertz said. “From my standpoint, the receiving part of the game comes naturally to me; from her perspective, she needed to get more in shape and just had to kind of calm down and see the game. She’s done that.”

Johnston has sought out mentorship of her own: While in the Philadelphia area last year to support Ertz during the Eagles season, Johnston began training nearby in New Jersey with national team veteran Carli Lloyd and her coach. Injuries to the defensive corps on the national team gave Johnston an opening, and she has now become one of the most visible players on the squad.

Of course, that newfound visibility may have given Ertz some romantic competition. The Phoenix chapter of the American Outlaws soccer fan organization has developed something of an obsession with Johnston, an Arizona native, and recently Tom Hanks gave her props, having ostensibly read the “beast” line in the Times. But his and Johnston’s relationship has also immersed Ertz in the world of soccer: He attends as many games as he can, he brags about his FIFA video game prowess, and he now follows European clubs in addition to Johnston’s teams. She’s a Barça fan; he can’t help but admire Real Madrid. But he’ll admit her team is good. “Messi, Neymar, and Suárez, even though he kinda bites people here and there,” he says, laughing, “I think those guys approach the game the right way.”

His Philadelphia Eagles teammates have taken to following the women’s national team too. “Their interest in the game has grown as well, now that they know somebody that’s on the team” he said. “They text me during the game, like, oh, that was a great play, or we needed to score — that kind of thing. An offsides goal that got called back, they were up in arms.” The support is mutual: When Ertz snagged his debut catch back in his rookie season, Abby Wambach tweeted: “My boy @zertz_86 just got his first grab of his nfl career. First of many!!!”

Ertz, on a break from team workouts, flew to Edmonton along with his mother to cheer on Johnston and the rest of the team in their win over Colombia. (New Orleans Pelican Jrue Holiday, whose wife Lauren plays for the team — though is suspended for tonight’s quarterfinal game against China — was also at Monday’s game; the guys both showed up in American kits.) If the women’s team continues to advance, Ertz plans to be at more matches in the tournament. “Being a fan for, like, truly the first time is an unbelievable experience,” he said. “But when the games are close, it’s nerve-wracking.”

In a sweet ode to Johnston on his blog, Ertz mentioned that, beyond heated card games, he and Johnston used to square off on the field. “I don’t really have the skills to be able to dribble around her,” he offered by way of a scouting report. “The only chance I would have is kick the ball around her, and hopefully run and chase it down before she can catch up.” You can only imagine the relationship drama that caused.

But, as with Uno, the two know how to put the past behind them and move forward. “We kiss and make up,” Ertz said.

Continuity Errors: Why the Blazers and Pacers May Have to Start Over

The 30: Atlanta Wants Your Bad Contracts and Your Good Prospects