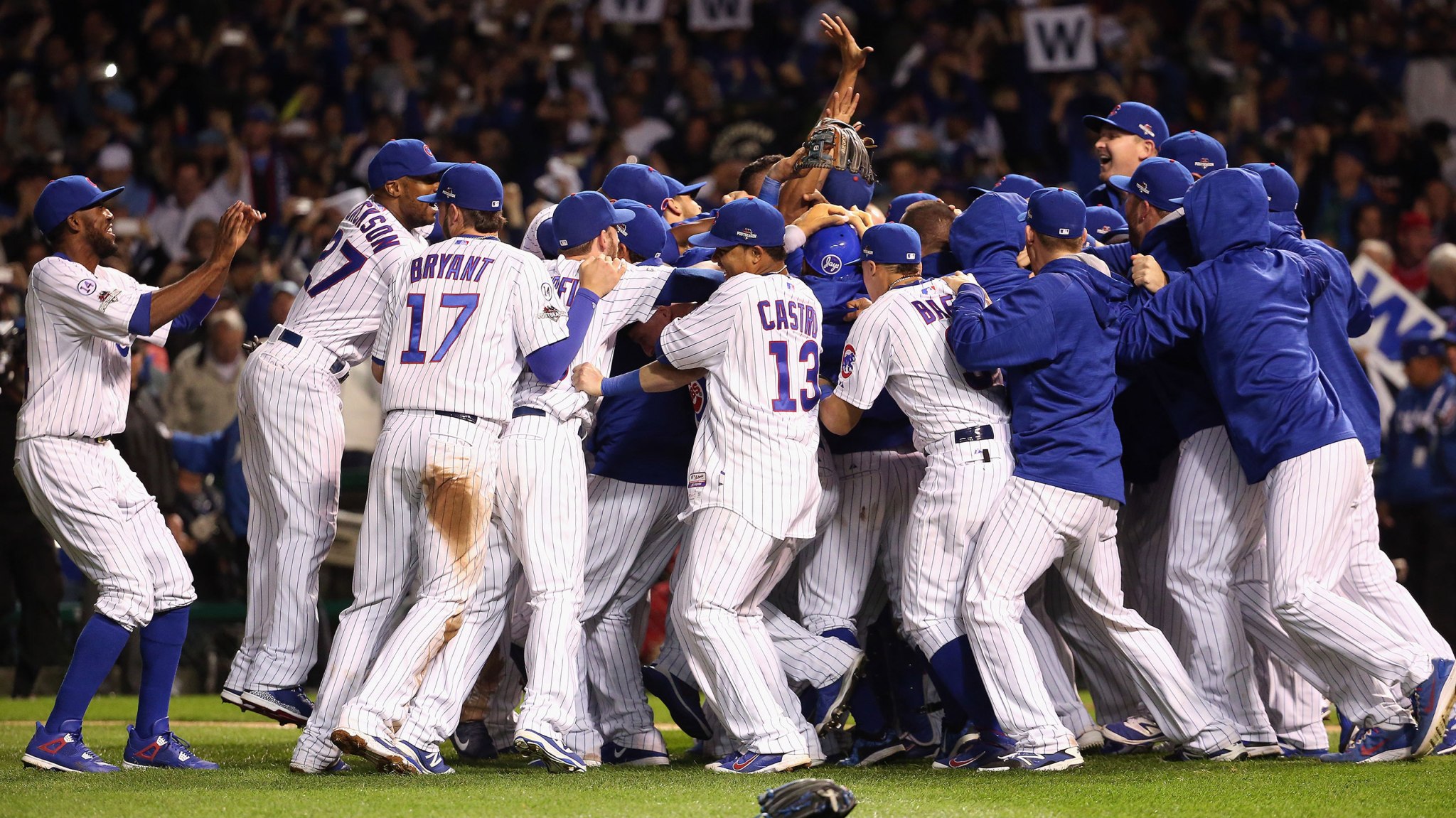 Going into the series against the battle-tested St. Louis Cardinals, a lack of playoff experience was supposed to be a problem for the Chicago Cubs. They were relying on four rookies — Kris Bryant, Addison Russell, Kyle Schwarber, and Jorge Soler — and another near rook in Javier Baez. Hell, only two of their starting position players (Miguel Montero and Dexter Fowler) had ever even played in the postseason before.

After Tuesday night’s 6-4 win over the Cardinals, the Cubs are now moving on to the National League Championship Series — and the virtues of playoff maturity lie in tatters throughout the Wrigley Field bleachers.

Bryant smashed the Game 3 go-ahead homer that gave the Cubs a lead they wouldn’t relinquish. Russell whacked a pulse-stopping triple in Game 3 and knocked in the go-ahead run in Game 2 with a well-timed squeeze play. Schwarber showed off his cartoonish power, clubbing his second and third homers of the postseason. Soler and Baez didn’t even open the series in the starting lineup. But by the time Hector Rondon struck out Stephen Piscotty in the ninth inning Tuesday, Soler had emerged as the best player of the series and Baez had delivered one of the biggest blows of the postseason — an unlikely, electrifying, opposite-field three-run homer that started the Cubs on their way toward a clinching victory. They all make the guy who hit last night’s game-winning homer in the sixth — 26-year-old Anthony Rizzo — seem like a grizzled vet.

For as talented as all those kids are, the havoc-wreaking of Schwarber, Baez, and Soler in particular made it hard not to wonder: In an admittedly small sample size of games, what made these youngsters seem so immune to playoff pressure?

There’s that, and then there’s Maddon’s claim that Chicago’s veteran players and coaches provided steady leadership that helped the young guys succeed. But maybe it’s more simple: Talent wins out above all else. And by series end, the Cubs just had more of it than the Cardinals — even if a lot of their key contributors, by baseball’s standards, are still wearing diapers. 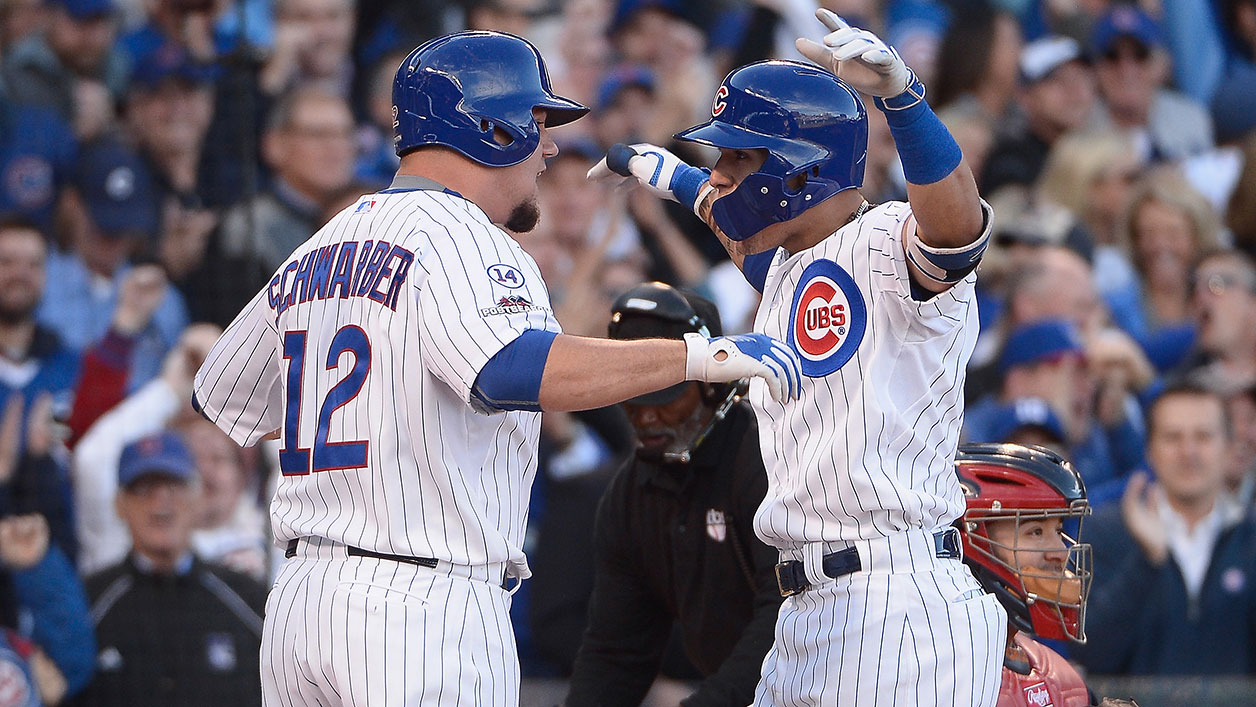 Of course, there’s the history: The Cubs haven’t won a World Series in 107 years. This was only their second playoff-series win in as much time. And it was Chicago’s first series-clinching victory at Wrigley Field, which first welcomed the franchise in 1916. Yet what makes this win resonate even louder is how the Cubs did it: by beating the Cardinals at their own game.

To win 100 games and the NL Central crown this year, St. Louis had to overcome an avalanche of injuries. Adam Wainwright tore his Achilles, and his bullpen-restricted return before season’s end was a shocker. Matt Holliday played in just 73 games thanks to a major quad injury. Yadier Molina, Matt Adams, and other contributors also missed significant chunks of time. But the Cardinals’ parade of young talent enabled them to overcome all of that. New faces like Randal Grichuk, Stephen Piscotty, and Tommy Pham became the newest faces of #CardinalsDevilMagic, which is really just a silly, superstitious way to describe a player development machine that’s been the envy of the rest of baseball for years.

The Cubs still have lots of work to do to catch the Cardinals when it comes to producing quality homegrown pitchers. But as far as hitters go, the North Siders’ own player development success now takes a backseat to no one.

Consider Schwarber. In one sense, he’s a 22-year-old blue-chip prospect now doing what blue-chip prospects are supposed to do. The no. 4 overall pick in last year’s draft, Schwarber’s combination of patience at bat and light-tower power made him look like a future star. But his doughy build and, especially, his shaky defense made some observers wonder if the Cubs had overreached. Could a kid whose best position is DH play most days for a National League team? The Cubs tried Schwarber at catcher, eventually moved him to the outfield, and simply overlooked his weaknesses to focus on his strengths.

So far in these playoffs, the results have been phenomenal. After going 2-for-3 with a tape-measure homer against the Pirates in the wild-card game, Schwarber batted .500/.582/1.100 in 12 trips to the plate during the NLDS. In the seventh inning of Game 4, he pummeled a Kevin Siegrist pitch so high and so far that it cleared the top of the damn scoreboard. It’s easy to fall into hyperbole with rookies, because all the great things they do make up an outsize portion of a limited résumé. And Schwarber certainly has holes in his game, including his so-so defense, his lack of speed, and — despite the rocket shot off Siegrist — his inability to hit tough left-handers. But you watch his swing-for-the-moon approach, the way the ball flies off his bat, his lumpy physique, hell, even his facial features, and, well …

The 22-year-old Baez navigated a bumpier road to reach this point. Last August, he whacked three homers in his first series (against the Rockies) in the big leagues. But then he became a relentless strikeout monster, whiffing 92 times and posting a .161/.223/.281 slash line in his final 199 at-bats of last season. In retrospect, Baez’s initial big league splash might’ve had more to do with playing at the hitter fun house that is Coors Field than his own raw power.

Those holes in Baez’s swing marooned him in Triple-A for most of this season. Then the Cubs called him up as part of the September 1 roster expansion, and suddenly he was back in the lineup, taking advantage of an unsettled second-base situation and Maddon’s tinkering tendencies. He made 80 plate appearances over the rest of the regular season. He still showed a lousy batting eye (24 strikeouts against just four walks) and rarely showed his power potential (just one home run). But he also played four different infield positions, establishing himself as a solid defender and versatile insurance policy who still had that pop in his repertoire.

Then Russell left Game 3 after hurting his hamstring legging out a triple. Suddenly the Cubs had to cash in for Game 4. With two outs in the bottom of the second, Maddon left Jason Hammel in to face John Lackey with two men on.1 Hammel slapped a run-scoring single up the middle to cut the Cards’ lead to 2-1. Baez stepped up next. Lackey’s first pitch was a good two or three inches off the outside corner … and Baez walloped it into a thicket of delirious right-field bleacher creatures.

That proved to be the second time this series that a kid took over a lineup spot previously manned by another player. After a Game 1 shutout in which the Cubs managed just three hits and with the team next facing a left-hander in Game 2, Maddon tapped Soler to take Chris Coghlan’s spot in the lineup. Soler immediately ascended to a higher ethereal plane, cracking a homer and a double while walking twice. He then singled, homered, and walked twice in Game 3, making it an incredible nine straight times that he’d reached base, including a pinch-hit walk in Game 1.

Here was a bit of vindication both for Soler and for Maddon. Like Baez, Soler had shown flashes of incredible talent in his first brush with the big leagues last year, but the outfielder kept it going for longer, batting a robust .292/.330/.573 in 97 plate appearances. He looked so good in that cameo that Maddon likened his 22-year-old human toolbox to Vladimir Guerrero … with better plate discipline. But Soler didn’t live up to that promise for most of this year, hitting just 10 homers in 101 games and striking out nearly four times as often as he walked.

Then he went absolutely nuts when the Cubs needed it most. Last night, he crunched balls with his violent right-handed swing, showed off that promising batting eye that Maddon insisted he had, and made a crucial throw to quell a sixth-inning Cardinals rally at one of the most pivotal moments of the series.

The Cardinals battled valiantly, but simply couldn’t muster the talent to match the Cubs’ cavalcade of free-swinging young’uns. Aside from a well-placed double in that sixth inning, Tony Cruz looked overmatched as an injury replacement for Molina. Jaime Garcia suffered from a stomach ailment in Game 2. Holliday’s lingering quad injury rendered him punchless in this series, just as he was upon his return from the DL in mid-September.2 A seemingly deep bullpen unraveled during both games at Wrigley. And adding insult to injury, the Cubs’ own pen proved instrumental in victory, providing six innings of relief in support of Hammel, including appearances by three different pitchers who’d been designated for assignment at some point this season.

This deep into the postseason, every team will have plenty of mashers and bat-missers at its disposal. But the remaining team with the best regular-season record has more position-player talent to throw at opponents than either of its potential NLCS foes. Throw in the historic Jake Arrieta and these guys just might be the Senior Circuit favorites.

When a young group makes the playoffs, we’ll often hear about how the players weren’t supposed to be there this quickly. Well, the Cubs still are. And with this group of precocious pulverizers taking the field, don’t count on them going away anytime soon.