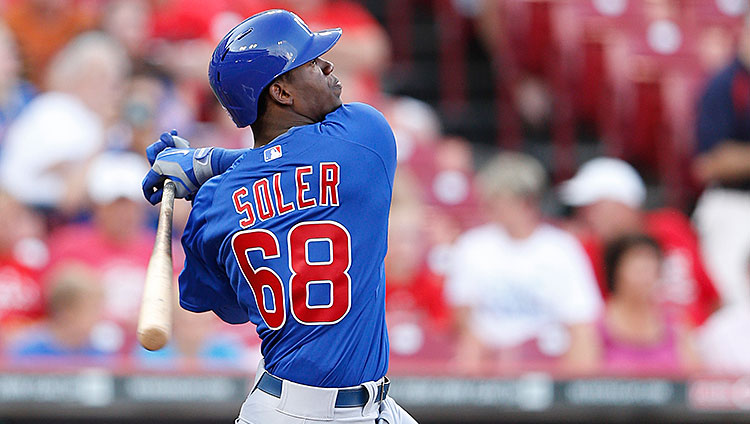 Remember when Yasiel Puig and Jorge Soler were a piece of our collective memory? In June 2012, Puig, then 21, and Soler, then 20, Cuban defectors and power-hitting corner outfielders both, signed amateur contracts that seemed to illustrate that baseball’s owners had so distorted the player salary structure that their GMs had more money than they could spend.

Soler signed with the Chicago Cubs for nine years and $30 million, and about three weeks later, the Dodgers landed Puig for seven years and $42 million. Both were untested against American pitching, at any level, and both contracts represented substantial risks for the teams that signed them.

Within a year, Puig was up with the big club in Los Angeles, and you know his story well — he’s deconstructed baseball, torn it down to its roots, and remade it in his own image. He’s been baseball’s most exciting and divisive player while exceeding all but the most optimistic expectations in terms of on-field performance.

Soler’s road to the majors was a little more circuitous, as it was expected to be. Puig was more physically mature — even though Soler has put on weight and is nobody’s idea of skinny, he doesn’t look like he could play defensive end the way Puig does. There were some unexpected roadblocks for Soler, as well, including a bizarre incident early in 2013 in which he menaced the Clearwater Threshers, collectively, with a bat.

Nevertheless, a little more than two years since he signed, Soler made his major league debut last night.

The Cubs are in the middle of a long-term rebuilding project headlined by a group of position-player prospects — Soler not least among them — who share one defining characteristic: They destroy baseballs. You might already be familiar with Javier Baez, and Kris Bryant will probably make it to the majors early next year. Those two and Soler all have prodigious power, and they are all 22 or younger.

It’s easy to get carried away when you’re talking about the exciting young prospect coming up. The responsible thing to do is be patient and let the kid …

That’s his first major league swing, by the way. Soler let three pitches go by, the way you might at a batting cage. When Mat Latos grooved a fastball — and listen, I got excited, too, but that was a meatball — Soler turned on it and hit it over the “Proud Sponsor of Flamethrowers” sign in center field. It was the swing that launched a thousand “Soler Power” puns. [Editor’s note: LOL]

Next time up, Soler, perhaps convinced by his first plate appearance that every swing would result in a home run, popped up on the first pitch, another 90 mph fastball. He watched the first five pitches of his next plate appearance — three balls and two called strikes. He swung and missed at a nasty slider that Latos, who’d cruised since Soler’s home run, bounced to get the out.

Soler’s final plate appearance came with impressive narrative potential. Jonathan Broxton was hemorrhaging baserunners, and the Cubs had cut the Reds’ lead to two. Soler came up, with one out and Baez and Starlin Castro on the corners, representing the go-ahead run. Soler took a fastball inside, then got on top of another fastball in and yanked it on the ground to left field to cut the lead to one. It wasn’t quite ideal, but it was a decent ending to a solid night’s work.

Puig also went 2-for-4 in his debut, but without the home run and two RBIs.

Soler looked confident at the plate, mixing patience with fall-out-of-your-chair-laughing power. One game doesn’t make a rookie, but it’s a big step. And all of a sudden, that hypothetical Cubs juggernaut we’ve been talking about for years looks a little less theoretical.

NFL Roundup: Josh Gordon Is Gone, Cam Is Hurt, But Bortles Is Here