Throw Down: The Blue Jays Toss the Rangers Thanks to One of the Craziest Innings in MLB Playoff History 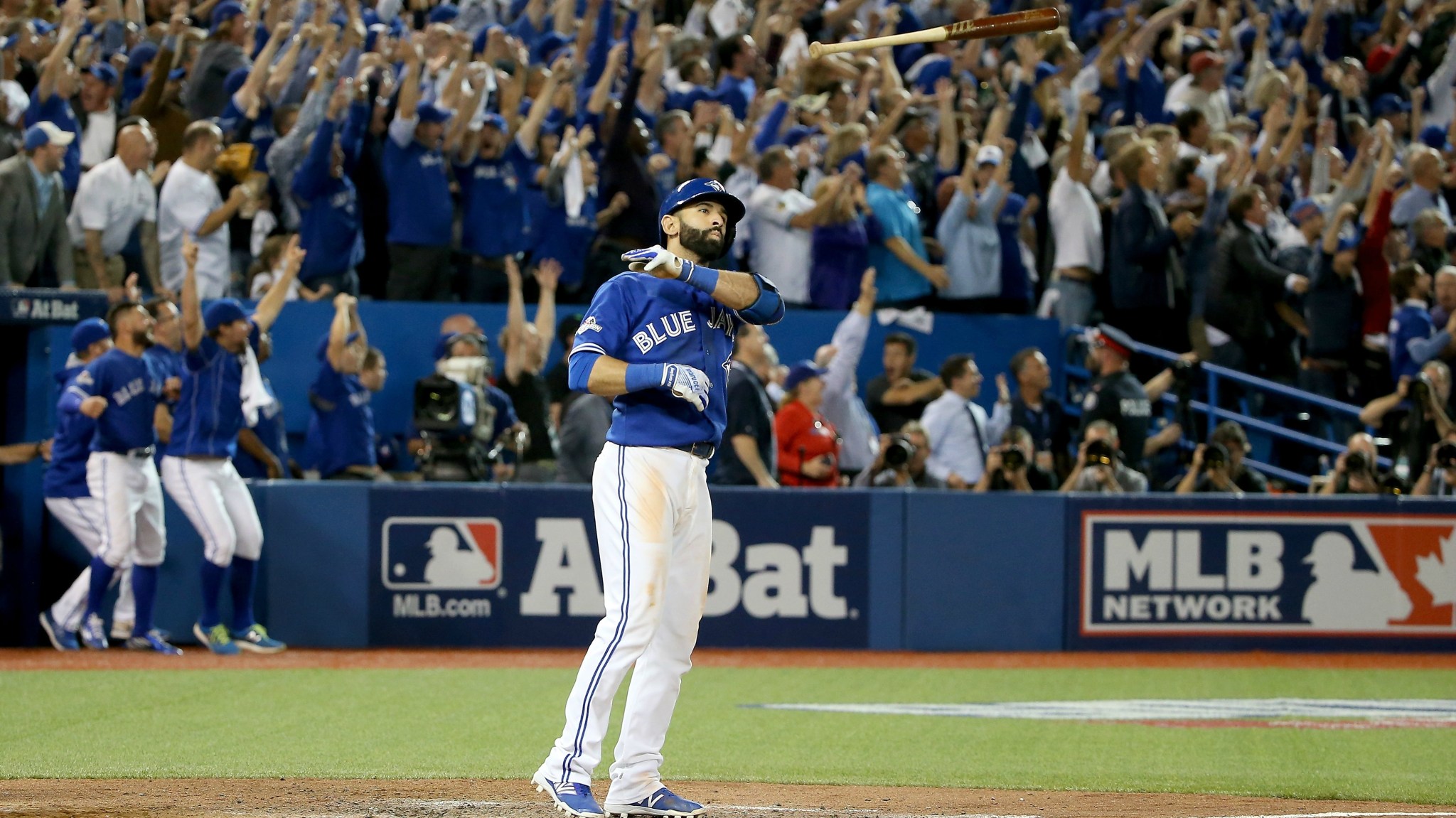 The first two-thirds of Toronto’s series-clinching 6-3 win over the Texas Rangers were quite good but will go completely unremembered. After dropping the opening contests at home and winning Games 3 and 4 on the road, the Blue Jays came back from an early 2-0 Game 5 deficit to take the final contest, and the series. Texas’s Cole Hamels made it through six innings looking very much like what he is: a guy who’s seen everything and approaches win-or-die situations expecting to be the last man standing. He traced the edges of the strike zone with his fastball, cutter, and changeup, made funny faces at his infielders, and on the rare occasion that a Blue Jay got the better of him, he accepted it quietly, with a peeved expression, as if allowing a run were a mild annoyance.

Meanwhile, his counterpart, Marcus Stroman, stomped around the mound, flinging sinker after sinker at the plate, flailing his arms on every follow-through, leaping and shouting at his teammates after key defensive plays, and generally giving off the impression that baseball is much more important to him than it is to other people.

That would’ve been a good game, and a good story, but I only mention it here so there’s at least some record of what happened before there were two strikes and two outs in the top of the seventh inning.

With Rougned Odor on third, Shin-Soo Choo took a ball high from Aaron Sanchez and stretched out his arms as he settled back into his stance, and as he did so, Toronto catcher Russell Martin accidentally hit his bat with the throw back to the pitcher. Odor raced home as the ball trickled away, putting the Rangers up 3-2.

Catchers’ return throws are deflected once or twice a year — that it would happen in the late innings of a tied elimination game with the potential winning run on third is simply not among the possibilities for which we can reasonably expect to prepare. So as plate umpire Dale Scott called time, then called to the league office for a review of the rules after conferring with his crew and both managers, things got out of control.

Blue Jays pitchers Mark Buehrle and Brett Cecil were both ejected, despite neither being on the active roster. Blue Jays manager John Gibbons entered an official protest. And Blue Jays fans — most likely out of displeasure, though possibly to honor the 1977-79 Blue Jays teams that lost more than 100 games — covered their field in garbage.

Sure, throwing stuff onto the field isn’t going to accomplish anything, and when you consider how much it probably hurts to get hit on the head with a beer can thrown from the upper deck, it’s also more than a little unsafe. But despite being warned against it, and being aware of the futility and the danger of it — to say nothing of the fact that we’re conditioned from childhood not to literally throw things when we’re upset — hundreds or even thousands of fans threw things onto the field.

We’re supposed to have evolved beyond displays of incoherent rage. We’ve suppressed that instinct in ourselves and covered our world in rules to try to prevent that rage from bubbling to the surface, but from time to time, we’re confronted with an outside stimulus so bizarre, so unexpected, and so enraging that it seems like societal order shouldn’t allow it. But bizarre (and, frankly, unfair) as it seemed at the time, it happened anyway, and there was nothing anyone could do about it. Civilization failed us, and when civilization fails us, a civilized response just isn’t enough. It wasn’t right, or smart, to throw things, but it was the most human thing to do.

Just as Martin’s not supposed to hit Choo’s bat with a throw, Elvis Andrus and Mitch Moreland, who are both good defensive infielders, aren’t supposed to commit errors on three consecutive plays, but that’s what they did to open the bottom of the seventh. It didn’t seem real until Hamels had been chased and Sam Dyson — probably the Rangers’ best reliever down the stretch — was watching Jose Bautista put the Blue Jays up for good with a prodigious three-run home run.

Home runs get out of the park in a hurry in Toronto, but this one afforded Bautista the opportunity to admire his handiwork and cast his bat off to the side with such enthusiasm that it seems disingenuous to call it a bat flip. It was an expression of satisfaction and happiness — and probably more than a little relief — that is almost without precedent in modern baseball. And given the events that preceded it and the importance of the game, I don’t think Bautista’s celebration even fully captured the emotion of the moment.

It’s why, in the aftermath of the worst moment of his professional career, Dyson threw something of his own: a tantrum. By the end of the inning — which lasted, all told, 53 of the craziest minutes of this postseason — Dyson had instigated two come-out-of-the-dugout-and-stare-at-each-other incidents, and after the game he delivered some regrettable comments about Bautista doing with his bat what a graduate does with his mortarboard.

Nothing Dyson said or did after the home run was admirable, honorable, or worth emulating. But after watching the game slip away so suddenly and shockingly, and standing there wallowing in his own painful, obvious inadequacy, having 49,000 people in the building and millions more on global television revel in his failure had to be humiliating beyond our capacity to imagine.

How does a person — particularly a person who has trained his entire life to be a ballplayer and not a poet or a psychiatrist — express that emotion? “Respect the game” is what comes out when disappointment and anger beyond words get filtered through ballplayer platitudes; if Dyson had expressed the entirety of what he’d felt at that moment, I doubt it would have come across as intelligible English.

Nothing about that seventh inning was explicable or common, and sometimes in the heightened atmosphere of sports, an uncommon reality generates uncommon behavior, and our capacity to experience emotion outstrips our ability to express it. Sometimes, the most human thing to do is to throw something.

'The Ropes' Podcast: Discussing the Rise of Gennady Golovkin