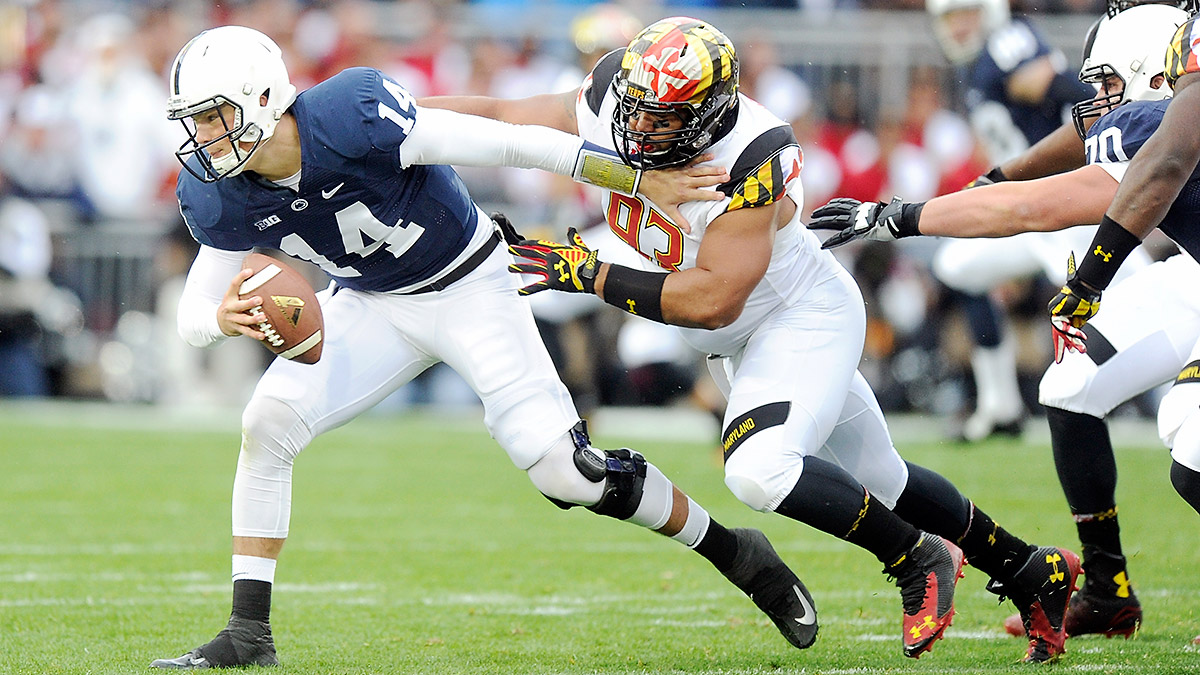 By the end, it was easy to dismiss Christian Hackenberg’s sophomore campaign as a flop, a casualty of irrational preseason exuberance, an unmitigated disaster, and by and large the criticism was on point. Hell, it was empirical: With 20.6 points per game, Penn State’s offense was undeniably the most toothless in a conference full of less-than-fearsome attacks vying for the distinction,1 a direct result of the Nittany Lions’ disintegrating offensive line. Once his supporting cast began to splinter and sink around him, though, Hackenberg seemed determined to go down with the ship. In Big Ten games alone, he served up nine interceptions to just four touchdowns, turning in the kind of pass efficiency rating (93.6) that in different circumstances would have gotten him relegated to the bench.

In Hackenberg’s case, though, survival was an achievement in itself: He took every meaningful snap in 2014 and endured more sacks (44) than any other FBS quarterback.2 With such spotty protection and not even the faintest hint of a viable ground game to slow down opposing pass-rushers, even when he wasn’t being hit Hackenberg often looked like a sentient crash test dummy who’d been rewired to brace for impact. As the season wore on, he grew so skittish and harried in the pocket that he was not only inclined to launch slow-mo horror howlers like this one, in an eventual 20-19 loss to Maryland …

… but also unable to conceal his frustration with the ineptitude around him.

At the end of the first clip, watch Hackenberg react to the interception with exaggerated disbelief, as if his first-and-10 arm punt had any prayer of connecting with a blue jersey; a local reporter after that game described the then-19-year-old as appearing “petulant, mopey and combative,” and summed up his attitude toward assistant coaches as “sullen disdain.” In the second clip, admittedly, there were few good options at Hackenberg’s disposal after six of his seven ostensible blockers3 let rushers through with minimal resistance, but he still chose the worst possible one; Michigan, virtually incapacitated on offense itself, converted the gaffe into a tying field goal en route to a win in one of the more depressing contests of the season.

The results were bad, but worse, the young quarterback appeared to be handling them badly, a recurring theme that led to a one-on-one meeting with first-year PSU coach James Franklin after the Maryland loss and transfer rumors at the end of the regular season, on the heels of another low-scoring dud against Illinois. Although he didn’t go anywhere, Hackenberg conceded this summer that at one point he “kind of shut down as a person,” ignoring his family and calls from his high school coach for weeks at a time, and from the outside the visible tension on the sideline signaled the ongoing meltdown. For a quarterback whose team finished in sixth place in its division despite boasting the conference’s no. 1 scoring defense, there was no flattering context.

And yet: Amid the turbulence and the petulance, if you watched closely it was still possible to discern the faint outline of the five-star phenom who was once greeted as a beacon of hope — arguably the only hope, at the time — for a program reeling after the throes of the Jerry Sandusky scandal. The 2014 flashes were rare compared to Hackenberg’s far more promising freshman campaign in 2013, but at certain moments the promise was still there. Go back to the season opener, for example, a 26-24 win over Central Florida, in which Hackenberg set a school record for passing yards in a single game (454), looked poised in a frequently collapsing pocket, and rallied the Lions for a game-winning field goal as time expired. Go back to the second half at Rutgers, on the night the offense’s bleak trajectory was more or less confirmed, and watch Hackenberg rebound from a miserable first half to lead the game-winning touchdown drive in the closing minutes. Go back to a late-October visit from Ohio State, in the depths of the offensive spiral, and watch a seemingly overwhelmed Hackenberg — who’d already been sacked four times and picked off twice and had no hope of run support whatsoever4 — pull out of the skid in time to administer a pair of extended fourth-quarter scoring drives that forced the eventual national champs into overtime. Go back to the bowl game, another fourth-quarter comeback leading to overtime, in which a well-rested Hackenberg delivered his best stat line of the season (371 yards, 4 touchdowns, 156.7 efficiency) in a badly needed, 31-30 win over Boston College.

In those moments, brief and often circumstantial5 as they were, it was possible to remember why one of the worst statistical quarterbacks in college football was once so fawned over by recruitniks, and why pro scouts are fawning still: As a 6-foot-4, 228-pound flamethrower who, when granted sufficient time to survey the field and step into a throw, thoroughly embodies the template of an ideal NFL pocket passer, his right arm might just render the box score irrelevant come April.

Though Hackenberg remains an unusually polarizing prospect at the next level, it’s that kind of throw that has most of the people venturing a guess this early in the process erring on the side of his potentially unlimited ceiling: So far, Hackenberg has emerged as a fixture in the top 10 of preseason mock drafts, projecting as high as the no. 1 overall pick even among writers who concede that by this time next year, he could just as easily be preparing for his senior season in Happy Valley, still seeking to justify the hype while facing significantly more skepticism from the outside world. In 2015, he’ll be operating with a fully intact receiving corps, behind an inevitably improved line,6 and with every expectation that the gap between his potential and his production will finally begin to close. If it does, he’ll move on to the next level with as much confidence as incoming rookie quarterbacks are allowed to have these days, the narrative of the golden-armed prototype intact. If it doesn’t, he could suddenly find himself running out of time to prove it ever will.

It probably goes without saying at this point that Hackenberg’s wayward touchdown-to-interception ratio and subpar efficiency rating (109.4) in 2014 are well below the threshold for the kind of guys who get drafted to be franchise NFL quarterbacks these days. In fact, of the 16 QBs selected among the top 10 picks since 2006, only three — Matt Ryan, the third overall pick in 2008, and 2011 draftees Jake Locker and Blaine Gabbert — posted an overall efficiency rating south of 1307 in their final collegiate season, or finished with a TD-to-INT ratio worse than 2-to-1. And even in those cases, the final numbers were notably better than Hackenberg’s sophomore output — and that’s before accounting for the fact Gabbert and especially Locker were both far superior runners. Of the remaining 13, 10 ranked among the highest-rated passers in the nation, posting an eye-opening final-year efficiency rating of 160 or higher; in the cases of Heisman winners Marcus Mariota, Robert Griffin III, Cam Newton, and Sam Bradford, it was significantly higher. Obviously, Hackenberg has a lot of ground to make up to justify high-first-round billing.

But we knew that. Now, the more pressing matter is whether there’s any recent precedent for making such a leap from one year to the next. A cursory glance at top-10 quarterbacks in their next-to-last college campaign shows that most of them entered the money season much further along the curve, and none of them exactly shocked the world as their franchise potential emerged: 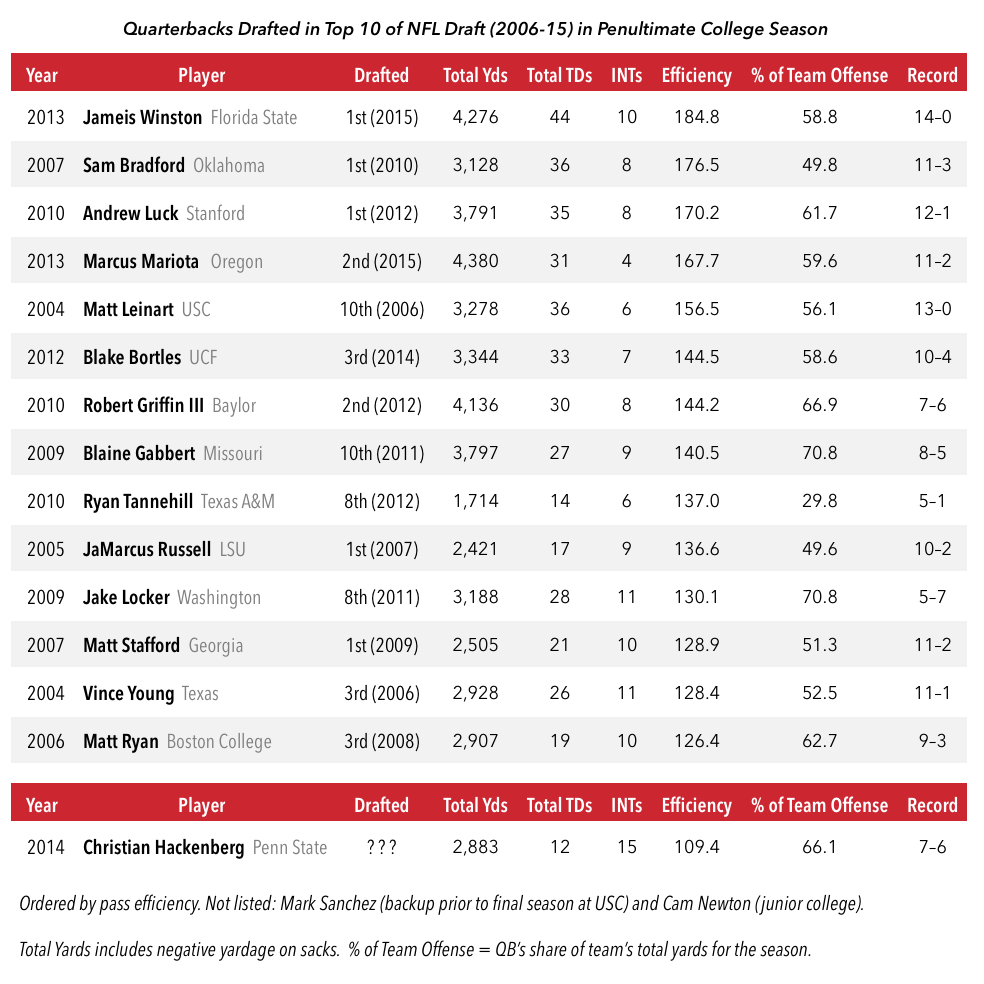 One important takeaway from this list is that not every first-round talent is destined to improve his production over time: Gabbert, Locker, and Tannehill all saw their already mediocre efficiency ratings fall slightly from their penultimate season to their last, and Winston’s year-over-year efficiency plummeted by nearly 40 points.8Despite a dramatically higher profile as a senior, Matt Ryan’s number barely budged from 2006 to 2007.9 Only Griffin, Stafford, Russell, and Young improved their rating by at least 20 points in their final year, with only Young (from 128.4 to 163.9) and Griffin (from 144.2 to 189.5, the second-best rating on record) taking advantage of spread offenses designed around their athleticism to make the kind of dramatic, career-defining surge that Penn State fans hope is in store for Hackenberg, minus the “dual-threat” part. Anything less will leave him on the fringes of this group statistically, and presumably well behind the more proven competition at the top of the 2016 class. 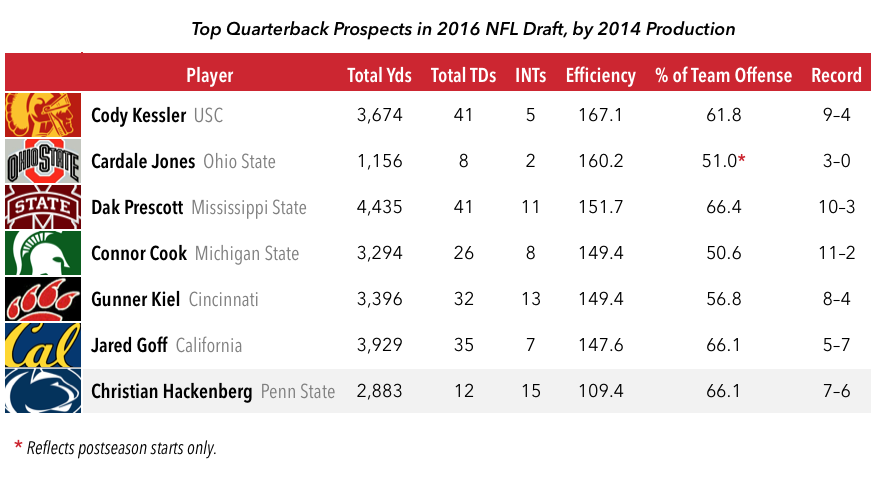 Of course, numbers aren’t everything; if they were, Hackenberg wouldn’t be in this mock draft discussion at all until lifting his stat sheet out of the Big Ten cellar. But besides what his obvious raw talent affords him, he deserves the benefit of the doubt for absorbing the weekly allotment of punishment that came with playing behind one of the most dysfunctional fronts in the nation10 and for effectively carrying the offense for much of the season. Against Power 5 opponents, Hackenberg’s share of Penn State’s total yards rose to nearly 70 percent, and in a handful of the team’s best performances — in the down-to-the-wire wins against UCF, Rutgers, and Boston College, as well as the down-to-the-wire loss to Ohio State — he accounted for more than 80 percent, including negative yardage on sacks. Against respectable competition, Penn State often didn’t even bother with the pretense that the offense was anything but a one-man show. And if there are lingering doubts about Hackenberg’s ability to elevate a relatively traditional offensive scheme without some kind of relief from the ground game, there’s still no question that the Lions will only rise as far as his arm can take them.

But more encouraging than any conjecture about the surrounding cast is the fact Hackenberg, outbursts aside, has shown a capacity for growth and resiliency. In the middle of his freshman campaign, Penn State was humiliated at Ohio State, 63-14, the most lopsided Nittany Lions defeat in 114 years; from there, Hackenberg finished with eight touchdown passes to just two interceptions in the final five games, including a gem of a performance in the finale, a 31-24 upset at Wisconsin that marked the most efficient outing of his young career. Last year, his MVP turn in the Pinstripe Bowl helped purge the toxic vibe that had settled over the second half of the season and set a similarly optimistic tone for the past seven months; the preseason hype industry has obliged by treating him as a legitimate headliner despite the balance of evidence to the contrary. Hackenberg himself has made every effort to recast the 2014 debacle as growing pains, assuring the AP, “The entire thing that has happened, it’s been an awesome experience.”

Judging from his response as “the entire thing” unfolded last fall, it’s hard to believe that’s how he felt at the time. If that newfound peace holds up this fall, though, the result will be a giant step forward for Franklin’s program, and a giant payday for his bell cow, who will have earned it.