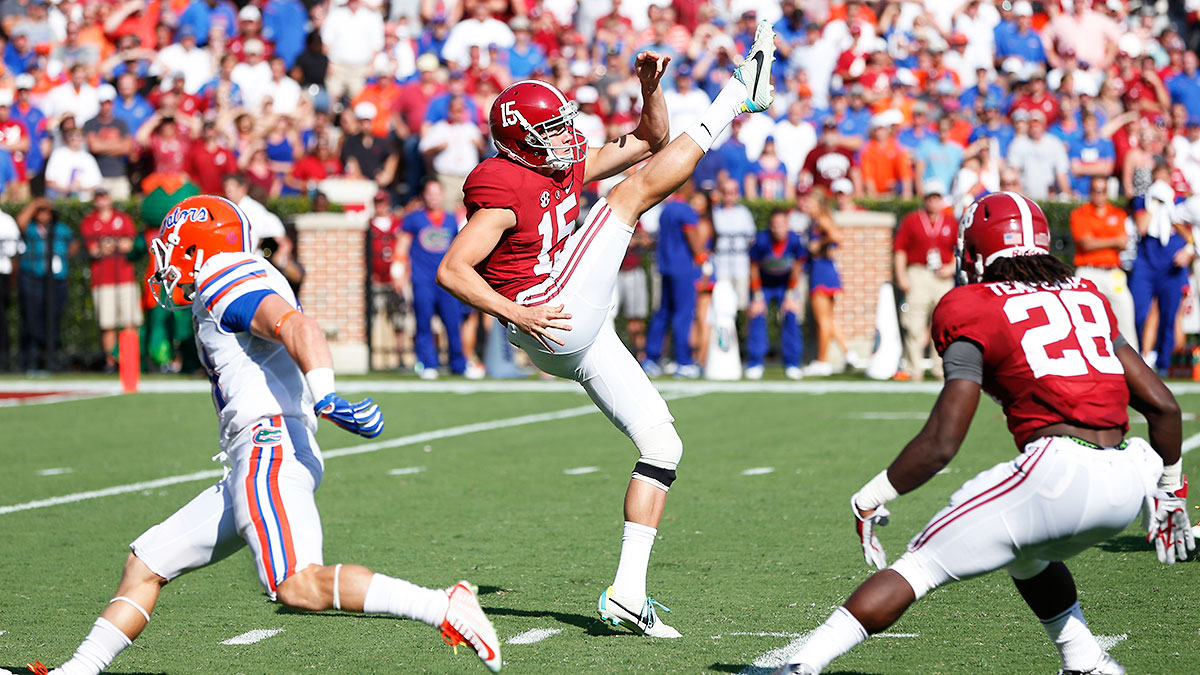 Punting a football consistently is both an art and a science, but before one can manage the former, one must master the latter. Each punt is its own physics equation: Because the leg is longer than the arm, an optimal grip is needed to extend the ball far enough to connect with the foot. (The ball should be dropped, never tossed, to avoid landing at a wonky angle.) The grip coincides with precise footwork and with calculations concerning drop-table height, body lean, hip thrust, the angle of the striking leg, the timing of the strike, and the impact position of the foot on the strike. For optimum power, the ball should land parallel to the foot, which should be as flat as possible to maximize the surface area on impact. The follow-through and finish are crucial to generating height and speed; body alignment is essential to accuracy. Then factor in wind, weather, field position, snap placement, and opposing rushers.

The entire process takes place in a little less than two seconds, and when the mechanics come together, the result can be a thing of beauty.

That’s Alabama punter JK Scott, to whom much of the nation was introduced in January during Alabama’s Sugar Bowl loss to Ohio State. If he wasn’t hailed as an artist or a scientist in the wake of that defeat, it’s only because people were too busy calling him other things, like “Alabama MVP” and “an authentic weapon,” that they probably never expected to say about a freshman punter, or any punter. At this level, after all, punters aren’t considered athletes so much as “specialists” or technicians; as offenses have accelerated ahead of defenses, punting in general has come to seem increasingly inefficient and anachronistic, a throwback to the era of three yards and a cloud of dust. But in the Sugar Bowl, as so often throughout his freshman campaign, Scott emerged as something like the Platonic ideal of a punter: a 6-foot-5 beanpole1 with an elastic right leg that served him equally well as a devastating pendulum and an astonishing grand battement.

His performance in the bowl game was a virtuoso display of power and precision, yielding five punts (out of seven) that traveled at least 50 yards — including a pair of bombs that traveled 73 and 65 yards — and pinned the Buckeyes inside their own 20-yard line. It wasn’t the work of a mere technician; it was as close as a punter can come to being a specimen. On a roster overflowing with blue-chip, NFL-bound prototypes at virtually every position, it wouldn’t have been unfair to argue that Scott’s was the most unmistakable, freakish talent on the field.

“I remember him being a guy who had a unique talent set, and the fact he was long, had great technique, the ball jumped off his foot very, very well,” says Jamie Kohl, a former Iowa State kicker who, along with his father and brother, founded a camp for kickers and punters that Scott attended from 2011 to 2013. “We had seen him maybe starting in his sophomore year [in high school], and by the end of his junior year — when we had him compete against other kids at a national level — I knew he was going to be a very, very good player. It was pretty obvious.”

The most important factor in generating distance, Kohl says, is leg speed, the intangible, unteachable factor that for kickers and punters is roughly what “arm strength” is for quarterbacks and pitchers. Though Kohl doesn’t use it, the more common term is talent. Anyone can learn mechanics; the leg speed either exists or doesn’t. “There’s guys that are able to apply kinetic energy and then there’s guys that aren’t,” Kohl says. “From a baseline athletic perspective, some people have more potential to do that than others. It’s like speed. Everybody can get faster, but some people can get a lot faster and other people they kind of top out. To the person watching from the outside it may look like [kickers and punters] are average people, but anybody that plays on Saturdays, or anybody especially that plays on Sundays, they have a unique gift to be able to generate leg speed.”

Scott, obviously, has the gift. The Denver native displayed it in such abundance last year that it often looked like he was kicking in the thin air of his hometown regardless of the game’s actual location. His first collegiate punt last September traveled 62 yards, resulting in a retreating returner for West Virginia being tackled inside his own 5-yard line. For the season, Scott led the FBS with a 48-yard average, an FBS record for a true freshman and a mark that also would have led the NFL. He was one of only two punters nationally (along with Bowling Green’s Joe Davidson) who was credited with two 70-yarders; seven of Scott’s other punts covered at least 60 yards, and 23 traveled more than 50 yards. Five times, he averaged at least 50 yards in a game on multiple attempts. Twice, in Alabama’s skin-of-the-teeth wins against Arkansas and LSU, he amassed more yards from his right leg than the Crimson Tide gained in total offense; down the stretch, he also came within 25 yards of matching the offense’s total yardage against Mississippi State and Ohio State.

Beyond the sheer power that opened so many eyes in the postseason, though, Scott was arguably most impressive for his control. More than half of his punts (31 of 55) pinned opponents inside their own 20-yard line, the best rate in the FBS or the NFL, while only five (!) went for touchbacks. More than a third (19 of 55) were fair caught, and after accounting for return yards,2 Alabama also led the nation in net punting at 44.7 yards per attempt. (Again, that number would have led the pros.) “I haven’t really looked at my furthest distance,” Scott told al.com earlier this month, “because you could hit a 75-yard punt, but if it has no hang time and isn’t in the right place, it doesn’t do much for you because the coverage is going to be off.”

That sentiment, even more so than the gonzo leg strength, gets at what made Scott enough of a presence in 2014 to inspire someone to make a YouTube montage of his finest moments, which consisted mainly of punts plummeting to the turf and rolling to an unmolested stop: His leg was valuable, a conclusion that only took a few weeks for regular Bama observers to reach, and one that was frequently reinforced down the stretch. By December, it was still possible for the locals to talk about their freshman bombardier as a hidden gem, even though his sky-high average had landed him on multiple All-America teams — who scrolls all the way down to the specialists? — as well as the short list for the Ray Guy Award, given to the nation’s best punter.3 But by the end of the Sugar Bowl, Scott’s value was so obvious that the government may as well have launched a study into whether his leg has relevant military applications.

It’s not easy to get excited about a punter, the one person on the field who is effectively a symbol of the team’s failure. Coaches barely know his name; fans would rather never hear it at all. He’s not there to score points or crack heads. His job is rote, repetitive, and, for most fans, synonymous with boredom. And in an era when even the best defenses can’t be counted on to drag every game into the mud — Alabama has allowed at least 34 points five times in the past two years while continuing to hold down its place among the nation’s stingiest scoring defenses — every missed opportunity to put points on the board is magnified. Punting is not winning. Punting is damage control.

Still, when someone is so clearly the best at what he does, it’s hard not to stop and gawk at the potential for challenging the existing benchmarks; when that someone is as young as Scott, it’s hard not to imagine some of those benchmarks being surpassed with ease. According to the NCAA record book, only one FBS punter with at least 36 attempts has averaged 50 yards per punt over an entire season (LSU’s Chad Kessler, in 1997), and no one has come close to maintaining that mark over a career.4 In the end, the Crimson Tide would still prefer to relegate Scott to permanent bystander status, or at least call on him so infrequently that he’s not able to amass enough attempts to qualify for any more leaderboards or record books; even Nick Saban doesn’t want to see his punter that much. But when frustration with the offense gives way to the buzz that accompanies no. 15’s entrance this fall, it will be because everyone in the stadium believes fully in Scott’s capacity to shatter the ceiling of how influential a player at the sport’s most overlooked position can be.

After the Fall: As Juventus Dominates, Serie A Needs Both Milan Teams to Be Competitive Again