After the Fall: As Juventus Dominates, Serie A Needs Both Milan Teams to Be Competitive Again 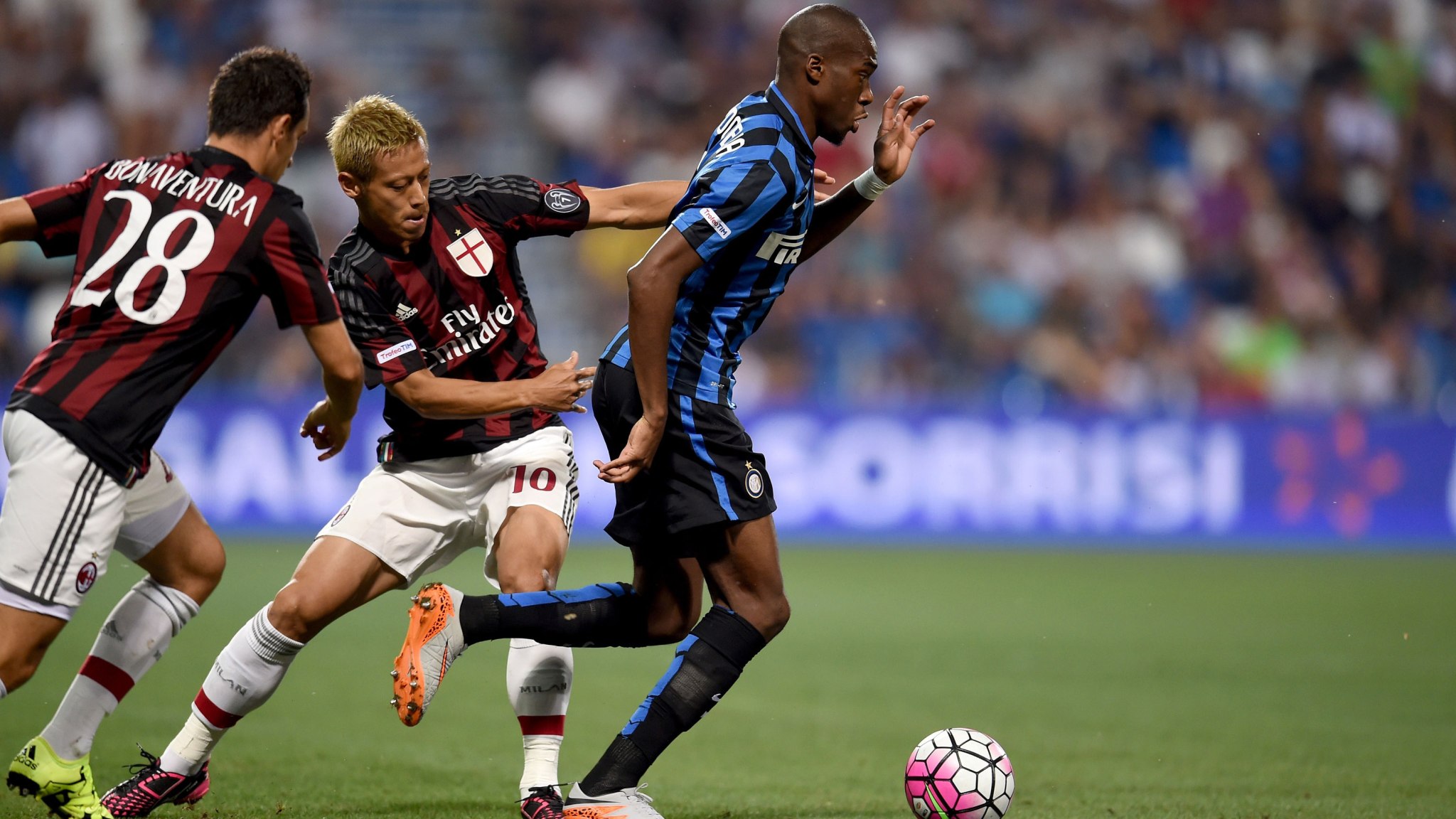 What’s next for Serie A? Last year — with Juventus’s run to the Champions League final and five Italian teams in the Europa League’s Round of 16 — seemed like a big step forward for a league that has struggled to keep up both financially and competitively with other major European brethren. Yet something was missing: The red-and-black stripes of AC Milan. And now this year, for the first time in 60 years, neither AC Milan nor Inter Milan has qualified for European competition.1

Five years ago, Milan won the league with 82 points, and Inter finished second with 76. It was Milan’s 18th Serie A crown, which tied them with their intra-stadium rivals. Since then, Juventus have won four domestic titles in a row with skyrocketing margins: beating AC Milan by four points in 2011-12, Napoli by nine points the next season, and then outpacing Roma in each of the last two years by a whopping 17 points. Without Milan and Inter near the top of the table, no other teams have shown any ability to push four-time defending champs Juventus in any way that couldn’t be dismissed with a pat on the head and an “aww, isn’t that cute.” Despite some clear progress last year, Serie A still needs its Milan clubs to get healthy — and not just for their history.

As the economy of Southern Europe collapsed, starting in 2009 when banks everywhere melted down, all teams in the league needed to cut costs. Yet, because of their aging players on big wages, Milan and Inter found that particularly hard to do because no one wants to take an expensive and ineffective Robinho off your hands. Before the 2009-10 season, Inter and Milan were one and two in the Italian wage-bill rankings, at €150 million and €125.5 million, respectively. Now? Milan is still second but at only €97 million, while Inter has dropped to fourth at €70.2 million. To make things worse, neither team’s performance matches its salaries: Last season, Milan finished tenth and Inter eighth.

Normally, after winning the treble in 2010, Inter would’ve been able to afford to hold on to some of their aging stars, sell some others, and also bring in adequate eventual replacements. Instead, they were left hanging on to (and paying the wages for) players like Esteban Cambiasso until his contract expired in his mid-thirties. And since these guys cost so much, Inter either never replaced them or had to bring in cheaper players who were below the quality level of a team that’d just won the Champions League. The bloated, expensive roster also meant that the club had to sell off prospects, including Phillippe Coutinho, who they shipped off to Liverpool for €10 million in 2013 and who has since become a star.2

Milan had similar problems. In quick succession, they let Andrea Pirlo’s contract expire, and he promptly moved to Juventus and won four titles. Then they sold Zlatan Ibrahimovic — only one year after buying him — and Thiago Silva to PSG for a combined €63 million. After generations of subsisting on a steady diet of purchasing stars, and paying high wages to established players, Milan really didn’t know any other way to go about things. And so the last five years have been littered with expensive false starts like Mario Balotelli and flailing after just barely affordable big names. For some reason, they’ve paid big money to washed-up former stars like Michael Essien, Kaka, and Fernando Torres. Apparently, when the fat cat loses its money, it turns into just a slightly-less-fat cat that stumbles around, begging buyers to take whatever change it has left.

Then there’s the matter of Financial Fair Play. Both Milan teams were largely funded by their iconic owners: now-disgraced former Italian Prime Minister Silvio Berlusconi for Milan and Massimo Moratti for Inter. Unlike other superclubs, your Manchester United or your Real Madrid, they didn’t have excessively large revenue streams. Instead, their success was funded by owners with deep, fashionably styled pockets.3 FFP is theoretically designed to stop clubs from spending more than they make. There are exceptions, and the rules may be relaxed for the richest clubs, but the fundamental point is to stop clubs from putting themselves in fiscal peril by having owners rack up debt — in other words, to protect them from doing exactly what Milan and Inter have done for the better part of their history.

Can They Rise Again?

Over the last few years, both clubs have brought in new ownership. Many questions remain, but each side looks like it probably wants to pour money into its club.

Erick Thohir, an Indonesian businessman who also owns DC United, bought 70 percent of Inter in October of 2013, but the process of turning the club around has been slow going since then. Last season, Inter hit new lows — not only in the table, but in the transfer market. The summer of 2014 major acquisition was Gary Medel, the Chilean madman they bought from a team that’d just been relegated from the Premier League.

Since then, there’s at least been some cause for optimism. They got hit with an FFP fine, which is actually encouraging because it means the club is at least trying to spend. They brought back manager Roberto Mancini, who laid the groundwork for Inter’s most recent glory years and won a Premier League title with Manchester City, for his second stint at the club. And this summer, they plunked €30 million on young French midfielder Geoffrey Kondogbia and brought Manchester City disappointment (but former Fiorentina success) Stevan Jovetic in on loan. Then, they augmented their defensive lines with loans of center back Miranda from Atlético Madrid and right back Martin Montoya from Barcelona. Sure, they sold their own young midfielder, Mateo Kovacic, to Real Madrid for €35 million, but for the first time in a long time, it feels like Inter is working positively within its restraints to improve the team. It may not work, but after years of simply trying to fall with as little pain as possible, at least there’s an attempt to build something.

On the other hand, Milan’s situation is a lot murkier. This summer, Bee Taechaubol, a Thai businessman, became the new owner of 48 percent of the club. But he probably isn’t the money behind the operation. Thing is, nobody really knows who his backers are or how much money they actually have. Doyen Sports Group seems to be prominently involved somehow. They formerly specialized in third-party ownership, frequently paving the way for South American players to make their moves to Europe, while also scoring large profits by owning part of each player’s rights. Is it suspicious for Doyen to suddenly become involved with a club in the same summer that FIFA banned third-party ownership? As with many things involving the business of world soccer, we’ll say just this: Yes, it absolutely is weird.

As for the team itself, Milan haven’t learned their lesson of the past few years, and they sure are spending. Bringing in Alessio Romagnoli, a 20-year-old defender with sky-high potential, from Roma for €25 million is super smart. But buying striker Carlos Bacca, who’s 28 and scored a bunch of goals for Sevilla despite troubling underlying stats, seems less smart. Bacca’s 34 goals in La Liga tie him for fourth over the last two years, but he did that by taking significantly fewer shots than other top players and converting 25 percent of them.4 He was either only getting easy looks at goal thanks to help from his teammates or he was finishing tougher chances so absurdly well he’d have to basically be better than the best players in the world to keep it up.5 It’s Milan once again grasping at established straws rather than building intelligently with a long-term plan. And in case that wasn’t enough of falling back on bad habits, Milan are at least rumored to be looking at reacquiring Ibrahimovic, who is 33 years old, will be on ridiculously expensive wages, and has minimal resale value.

For as misguided as some of their summer spending might be, though, Milan was lifting the Champions League trophy eight years ago. Meanwhile, Inter was doing the same thing three years later. Yet Serie A doesn’t even need either club to get back to being the best team in Europe. It just needs two of its most storied clubs to get back to being competitive. Inter might already be started on its way there, and if all goes well, the club could conceivably challenge for a Champions League berth this season. That level of competency seems like it’ll elude Milan for at least one more season, but for both clubs, the fall finally seems like it’s over. And when their seasons kick off on Sunday, the long, steep climb begins again.