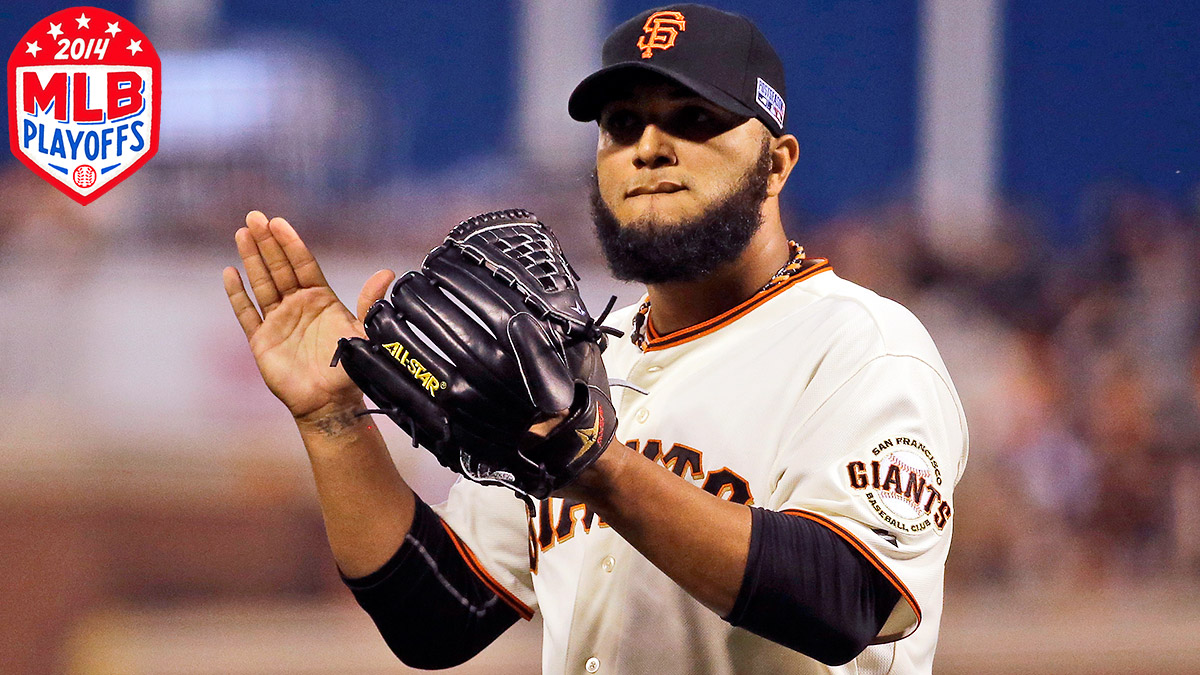 The Giants and Royals reconvene tonight in San Francisco for Game 3 of the World Series, with the matchup knotted at one win apiece and with plenty of questions looming heading into a pivotal weekend. Here are three of the story lines we’ll be following the closest during the Friday, Saturday, and Sunday action.

Bruce Bochy Needs to Battle for the Sixth Inning 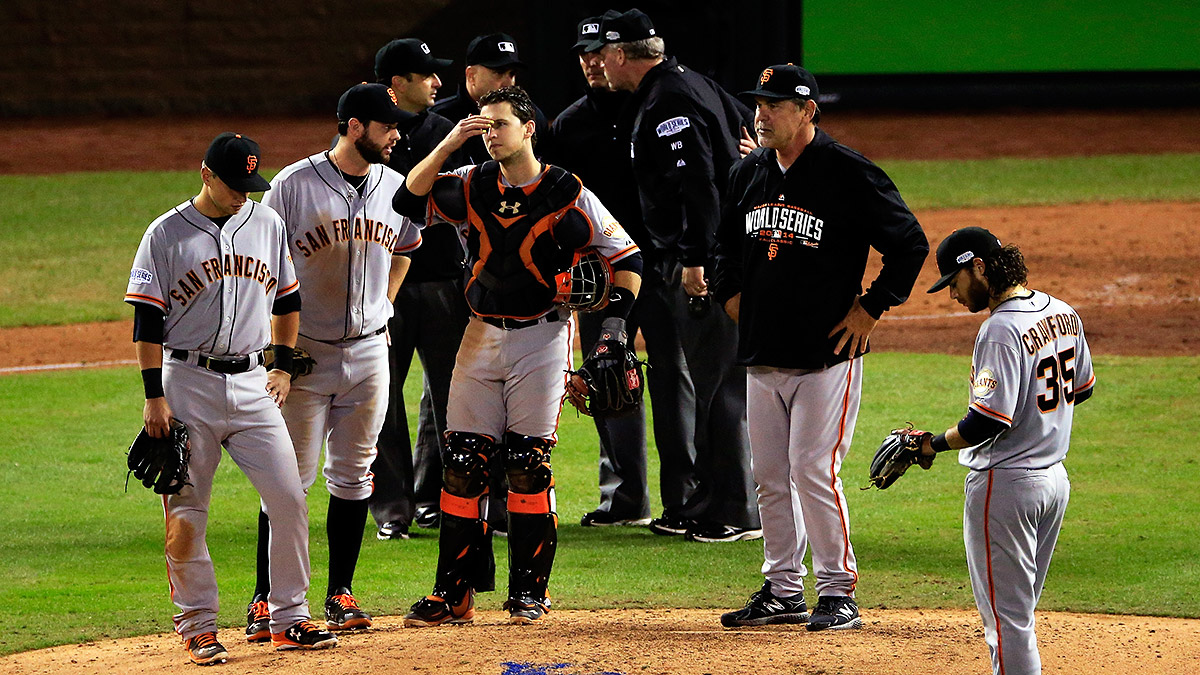 If San Francisco’s Bruce Bochy wants to win his third World Series in five years, one tactical adjustment could do more to help him achieve that goal than anything else either team could possibly conjure: managing the sixth inning as if the fate of the world depends on it.

So far, not so good. Bochy was reactive rather than proactive in Game 2, leaving starter Jake Peavy in to start the sixth and put two men on base with nobody out, then making a weird sequence of pitching choices by bringing in Jean Machi and Hunter Strickland with the game still very much in doubt. The result was a five-run inning for the Royals and an ugly loss for the Giants.

To understand what went wrong for Bochy on Wednesday night, we need to consider what typically happens in the sixth inning of baseball games, how the makeup of the Giants’ pitching staff affected the manager’s decisions in that inning, and what Bochy can do to prevent similar meltdowns the rest of the way.

Per Baseball-Reference, only two innings yielded more runs this season than the sixth: the first (the only inning in which a manager can fully control who comes to bat without having to pinch-hit) and the fifth. Unlike the first or occasionally the fifth, the sixth inning offers a perfect storm of terrifying conditions for teams trying to keep runs off the board, and also a realistic opportunity for a manager to take aggressive steps to curb scoring without burning out his bullpen.

On the whole, starting pitchers tend to get worse as the game progresses. Fatigue plays a part, but a big part of that stems from hitters picking up pitch patterns as they get more looks at the guy on the mound. Here’s a look at how starting pitchers have fared the first three times through the order in 2014:

In the Giants’ case, though, it’s quite instructive to consider these numbers, since no starter other than Madison Bumgarner (and one other guy who doesn’t officially have a spot in the playoff rotation but probably should; more on him in a bit) had an above-average season by Wins Above Replacement or other metrics.

The Giants have been absolutely terrible in the sixth, both during the 2014 regular season and postseason. Their pitchers (both starters and relievers) allowed a .283/.341/.443 sixth-inning slash line during the regular season, and their starters in particular got crushed in the sixth, allowing opposing hitters to bat .286/.340/.467 against them; that mark looks even uglier once you remember that offensive levels are slightly lower in the National League and that AT&T Park is one of the friendliest stadiums for pitchers. But it’s also consistent with the third-time-through-the-order penalty, which hurts the Giants even more than the masses: Opposing hitters torched Giants starters at a .292/.341/.484 clip the third time they came to the plate in games this season.

The problem has been even more acute during the playoffs. Though Bochy got lots of criticism for failing to pull Peavy until two batters had reached in the sixth inning on Wednesday, the manager was well aware of another stat: His relievers have also been terrible during the sixth inning this postseason. Counting the Game 2 debacle, batters have now teed off on San Francisco’s bullpen at a .308/.438/.615 rate in the sixth this postseason.

So there are two problems here: (1) After Bumgarner, the Giants don’t have the kind of frontline starting pitchers Bochy can trust to go deep into games; and (2) by employing his lesser bullpen arms in the sixth, Bochy has made the same mistake that virtually every manager (including his World Series counterpart, Ned Yost, until recently) continues to make: treating the sixth as a less important inning than the seventh, eighth, or ninth. If anything, the sixth might be more crucial to a team’s success than any of the above.

Consider which hitters come to bat most often in the sixth: the big boys in the middle of the order, who will likely be making their dreaded third trip to the plate by then.

So if a team’s starter is likely to pitch significantly worse in the sixth than earlier in the game, and the heart of the order is likely coming to bat, and the team lacks six or seven lights-out relievers it can slot into any situation,1 and it’s locked in a tie or a one-run game, what does it do? And more specifically, what should the Giants do in that scenario?

Use their best relievers in that spot and worry later about who’s left to close it out. At this point it’s hopeless to expect any manager to do something as radical as use his closer in the sixth, given the lengths skippers will go to avoid even slightly atypical closer usage. But with the stakes this high, Bochy needs to demote playoff arsonists like Strickland and Machi to mop-up duty and place a much higher priority on shutting down the opposition during the perilous middle innings.

And that’s why it’s time to reconsider the role of one badly underused Giant:

The Giants Need to Treat Yusmeiro Petit Like a Prime Asset

It’s not actually hard to figure out why: Bochy views Petit as a break-glass-in-case-of-emergency pitcher, and he undoubtedly felt vindicated by that approach in NLDS Game 2, when Bochy saved Petit until the 12th inning, then got six shutout frames from him en route to a key 18-inning win. Still, which emergency is more likely to occur: a starter other than Bumgarner having to traverse his third time through the order in a tight game with the big boys coming to bat … or another game lasting 18 innings?

Aside from Santiago Casilla and Javier Lopez, who for better or worse are the closer and left-handed specialist, respectively, the Giants’ two best bullpen options are clearly Jeremy Affeldt and Petit. If Bochy believes that Petit’s ability to throw multiple innings shouldn’t be wasted, then he should use Petit as a Mark Eichhorn type: a shutdown reliever who can throw two or more innings of non-closer relief at a time, and dominate while doing it. That could mean pitching the sixth and seventh innings of a tight game to get to Affeldt, or trotting out Affeldt first and using Petit as the multi-inning bridge to Casilla.

After Game 2, Yost said something quite telling: “After the sixth inning, my thinking is done.” Snark aside, that’s a reminder that the Royals are a devastating team when they’re ahead thanks to the relief trio of Kelvin Herrera, Wade Davis, and Greg Holland and enhanced run-prevention strategies like bringing in Jarrod Dyson for defense. If letting K.C. get ahead after the sixth is akin to a death sentence, it’s probably worth fighting to avoid that outcome. And if Bochy isn’t going to let Petit start over Ryan Vogelsong in Game 4, he at least needs to use Petit in big relief spots.

And while we’re on the subject of possibly quixotic quests:

The Royals Need to Reshuffle Their Batting Order 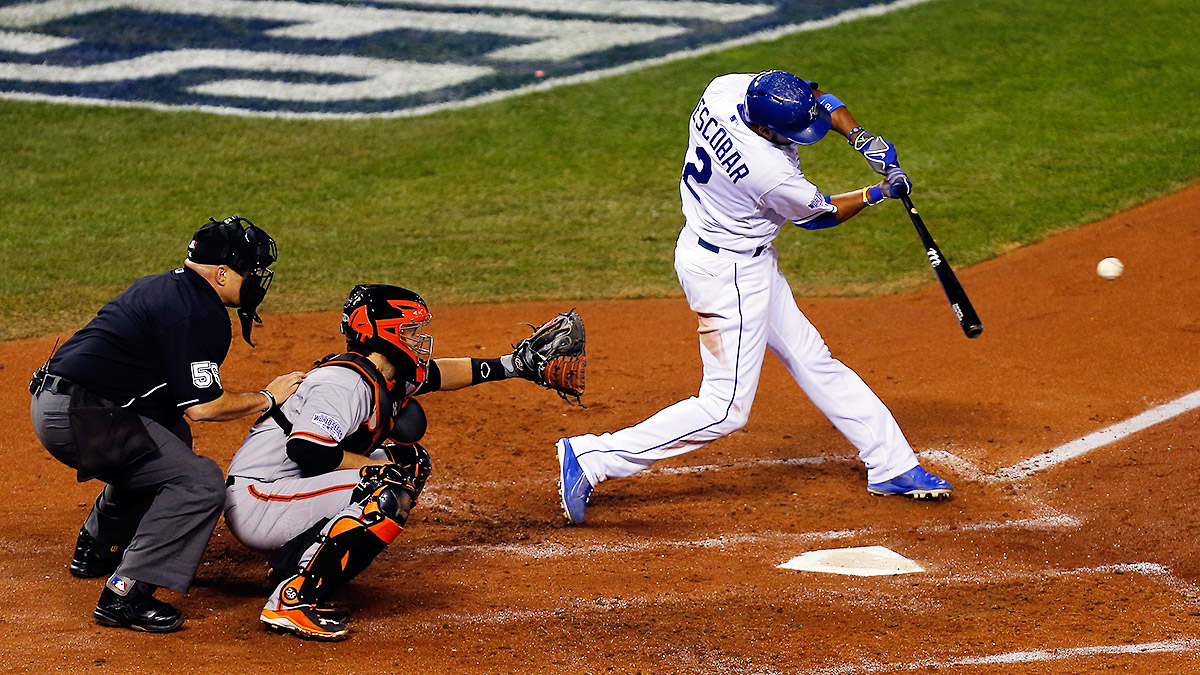 For all the Sturm und Drang fired at Royals shortstop Alcides Escobar following his ugly strikeout with men on second and third and nobody out in the third inning of Game 1 — and at Nori Aoki for his strikeout immediately thereafter — it’s worth considering whether the blame actually belongs with Yost.

Why the hell is Escobar getting more chances to hit than anyone else in the Royals’ lineup? That’s what hitting atop a batting order means, after all. A team might find marginal utility in putting a speedy guy atop the order, or in using a hitter with good bat control in the no. 2 spot, but those theoretical benefits fully apply only in the first inning, and even then only if the leadoff hitter reaches base. Escobar paired a relatively pretty .285 batting average with an uninspiring .317 OBP and a wretched .377 slugging average during the regular season, yet he’s leading off in the World Series.

He wasn’t always in that spot, though. On September 13, with the Royals’ offense slumping and K.C. in danger of missing the playoffs, Yost shook up his lineup, hiking Lorenzo Cain into the no. 3 spot, placing Aoki second, and giving the leadoff job to Escobar. The Royals happened to clobber the Red Sox that day, 7-1. “Looks like it helped a little bit,” Yost said after the game. So the Royals stuck with that configuration, doubling down by dropping Alex Gordon, the team’s best hitter, to the sixth spot because he’d gone through a mild slump. And that’s the lineup Yost has stuck with ever since.

From a distance, it looks like it’s continued to “work”; the Royals are, after all, three wins away from a World Series title. Upon closer consideration, though, this is the “After the sixth, my thinking is done” mentality applied to the batting order. It’s an overly simplistic approach, and it’s assigning causation to something that’s far more related to correlation. A few underachieving hitters happened to hike their numbers after the lineup switch. So on the basis of that coincidence, achieved in a small sample of games, the banjo-hitting Escobar is batting five spots higher than the productive Gordon, and thus seeing more at-bats than Gordon … in the World Series.

Escobar has improved to .295/.311/.432 during the playoffs, while Gordon is hitting .176/.333/.353 (in 48 and 42 playoff plate appearances, respectively), and the Royals are winning. But there’s also a chance that the lineup will wrap back around to the leadoff spot, bringing Escobar up in a game-deciding situation in the ninth inning, with Gordon four batters away from even being on deck. And if that happens, this configuration could come back to bite Yost in the butt.

Managers get away with poorly conceived strategies all the time, and it might well happen again here. But with both teams battling for incremental little advantages, the Royals are handing this one to the Giants.

NHL Grab Bag: What Would Phil Kessel Do?