MLB Overnight: The Cardinals and Giants Are NLCS-Bound After an Utterly Bonkers Night of Baseball 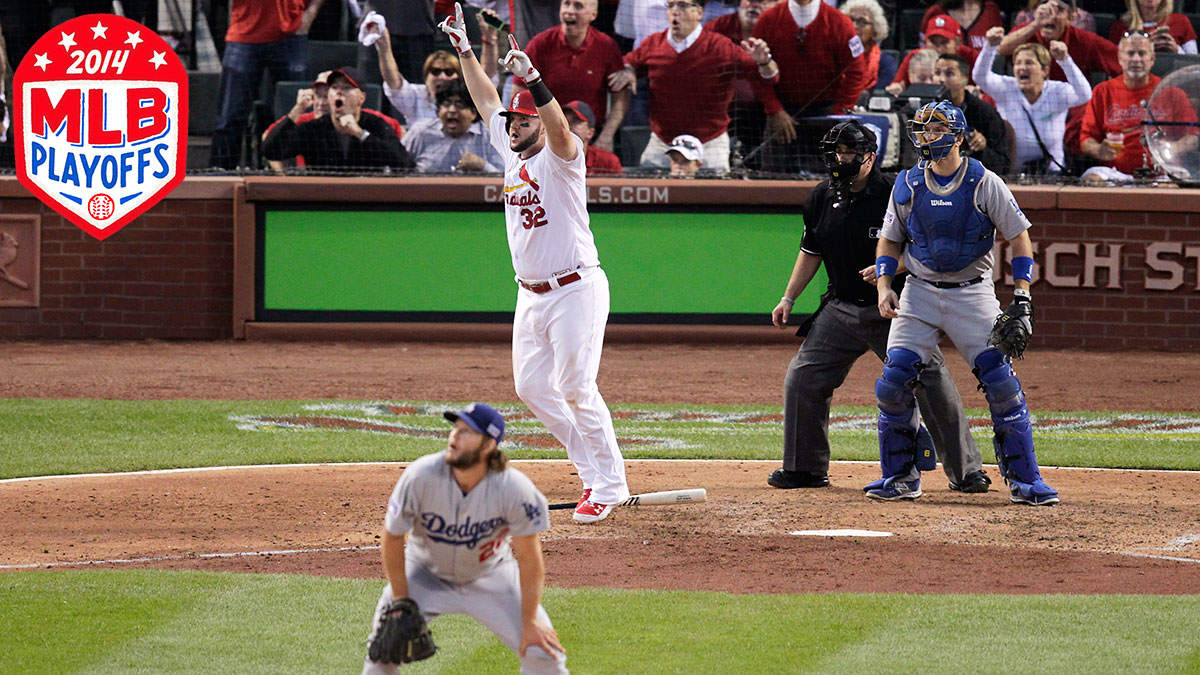 Between you and me, I’m worried this year’s MLB playoffs have started like the NBA playoffs did a few months ago: a phenomenal first round, but with a catch. In the NBA, the catch was that while every series was incredibly exciting, almost all of the favorites won, and then we sleepwalked through the rest of the playoffs. This October, the catch is that while we’ve seen some new blood win in riveting fashion, every series has ended in four games or fewer. Maybe that’s not a bad thing, though: With the Cardinals and Giants putting away the Dodgers and Nationals, respectively, we’ve now got two days off to collect our wits before the League Championship Series begin.

Don Mattingly made two controversial decisions heading into the Dodgers’ Game 4 NLDS matchup against the Cardinals, decisions a desperate manager makes as he grasps for the edge of the rock face while the spectacular team that had been his foothold all year gives way beneath him.

The first was benching Yasiel Puig. Though it was undeniably stupid for Mattingly to sit his best position player in an elimination game, and though replacement Andre Ethier made a critical baserunning error, it’s still tough to argue that the Dodgers suffered greatly from this managerial mistake.

And though Puig is a superior defender to Ethier, the difference is minuscule over the two outs (more or less) they record in center field during an average game. And while Puig has 60 points of on-base percentage and 110 points of slugging percentage on Ethier this year, what’s that worth over four plate appearances? That’s a quarter of an out, less than half a base. That’s a fraction of a run, which is a fraction of a win. The difference between even a great baseball player and a mediocre one is trivial over the course of six plays. Mattingly had no way of knowing whether chance would break in a way that vindicated his decision.

He did, however, know he was starting Clayton Kershaw on short rest. And that made more sense than benching Puig: It would increase the Dodgers’ chances of surviving Game 4 without hampering their chances in a potential Game 5, when Zack Greinke could take the mound on full rest.

The penalty Mattingly paid for starting a pitcher on short rest was uncertainty. Mattingly couldn’t know how much more quickly than usual Kershaw would tire, and after about 90 pitches, the Dodgers slipped into the dangerous confluence of a tiring ace, a 2-0 lead, and an entirely untrustworthy bullpen. Mattingly needed Kershaw to pitch seven innings, and even as the Cardinals put the first two men on in the seventh via an infield hit and a single to center, it was possible for viewers to play along and talk themselves into keeping Kershaw in the game — the difference between the two singles and two outs was about two feet, and the prospect of Kershaw giving up a three-run homer, off his curveball, to a left-handed batter, was unthinkable until Matt Adams made it a reality. That homer proved to be enough, as the Cardinals won 3-2 to claim the series and advance to their fourth consecutive NLCS.

The great human drama of Game 4 was Mattingly’s, but not because anything he did was particularly outrageous. Benching Puig was unwise, but its effect was negligible, and while Mattingly misjudged when to remove Kershaw even after his ace suffered a meltdown in Game 1, who else was the skipper supposed to call on instead? Nonetheless, Mattingly will be second-guessed all winter, because assigning blame makes us feel like we have greater control over our own destiny than we actually possess.

The truth is that baseball, like life, is both unpredictable and unforgiving. We like to draw bright, simple lines of causality, if only to break down events into units we can understand. It makes us feel like we determine our own fates, when in fact we’re applying the feeble force of what we can control against the implacable weight of what we can’t.

This game reminded me of the story of the Zen master that Philip Seymour Hoffman tells in Charlie Wilson’s War.

When Washington manager Matt Williams acted proactively by pinch-hitting for starter Gio Gonzalez after four innings, I was pleased. Gonzalez had been pitching OK, but not great, allowing two runs through four frames, and the Nationals had the tying run on second against Ryan Vogelsong, possibly the weakest pitcher they’d face in a high-leverage situation all series. So Williams went to his bench early, knowing he had a bullpen with a few solid relief arms, plus starter Tanner Roark and possibly Stephen Strasburg, who could throw a couple of innings on three days’ rest to set up Jordan Zimmermann to start in a potential Game 5.

The downside to yanking Gonzalez so soon was that it placed Williams, a rookie manager not renowned for his tactical nous, in a direct battle of matchups with counterpart Bruce Bochy, who works matchups and manages a bullpen better than anyone else.

Still, the flow of the game dictated such a move, even if it played into Bochy’s strengths. And even though it failed, pinch-hitting for Gonzalez was the right call. So was bringing in Roark, who would, I thought, soak up a couple of innings until it was time to turn to Tyler Clippard and Drew Storen. Not so. Williams went to matchup lefty Jerry Blevins after two-thirds of a choppy inning from Roark, and while Blevins was spectacular against the four batters he faced, Williams’s next move wasn’t for Clippard, Storen, Strasburg, or Craig Stammen, or even Rafael Soriano with the game on the line.

He went straight for his middle relievers, and it was a disaster. That disaster culminated in Aaron Barrett, a 26-year-old rookie right-hander who’s the reason we say things like “relievers are fungible,” standing on the mound with the bases loaded in the biggest moment of Washington’s season. Barrett, faced with two hitters who kill righties, threw two wild pitches, one to score Joe Panik for the eventual winning run, and another, inexplicably, on an attempted intentional walk.

The second would have scored a faster runner than Buster Posey, and suddenly, Williams found himself in a position where the season was in the hands of a pitcher who had never recorded an out in the playoffs, except — and this bears repeating — on a wild pitch on an attempted intentional walk.

It could’ve been worse if not for Bryce Harper, who went 2-for-3 with a walk and drove in both of Washington’s runs, the second on a moon-shot homer into McCovey Cove.

By the time he came up in the ninth inning, representing the final out, Harper had the same look teammate Anthony Rendon had in Game 2: He knew he’d have to win the game himself. Harper walked, but a groundout from Wilson Ramos ended the game and Washington’s World Series dreams.

There’s a long tradition of teams losing in the playoffs without using their best pitchers, and for recent evidence, I direct you to last season, when Craig Kimbrel declared a desire to “throw the last fucking two innings” while Atlanta burned.

And this is how the Giants win the World Series every two years: They play great defense and hit just enough to hang around until their opponents shoot themselves in the foot. Is anyone going to learn from this latest example? We’ll see.