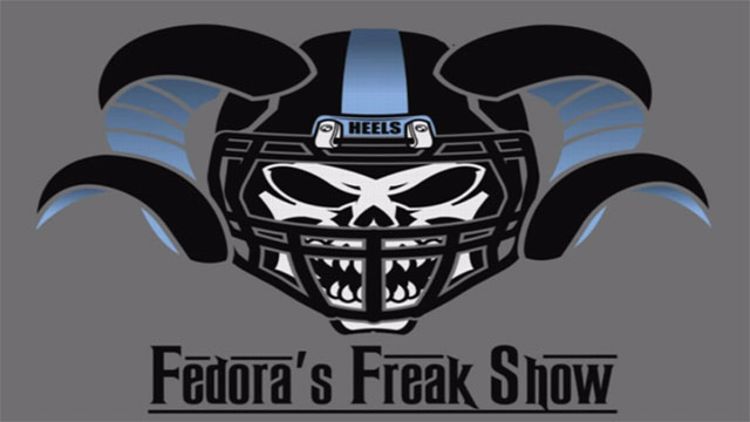 One of the most welcome modern developments in college football has been the unleashing of communications interns armed with bizarro offseason promotional campaigns on behalf of their programs’ coaches. We are speaking chiefly here of the University of Florida, where receivers coach Joker Phillips has been putting his name on material like this on the regular for months now:

Larry Fedora, himself a former Gators assistant, was a fine hire for UNC, based both on his ability to win under less-than-optimal conditions at Southern Miss and the alliterative potential in his surname. (“Everett Withers Freak Show” has an awkward mouthfeel, and there’s something about “Butch Davis Freak Show” that makes us uncomfortable for reasons we cannot fully articulate.) Fedora took up the Freaks mantle in 2012, and has continued to push the brand in 2013, with the same Swedish metal soundtrack and one memorable addition. Let’s all scroll up and look at it again, shall we?

Ignore the physics of getting a helmet on over those horns and just bask for a second. All it’s missing is a visor. This emblem appeared first in last week’s “2013 FREAKSHOW TEASE 1” and has not been elaborated upon in follow-up videos released Friday and Saturday. Is it too much to hope for Fedora to take the field in Week 1 against South Carolina dressed as some sort of genteel Tobacco Road Juggalo? Entertainment that first Thursday night will be hard to come by before the prime-time games, and we’re betting the equipment staff can even engineer a way to rig up a backward visor that spits blue flames.