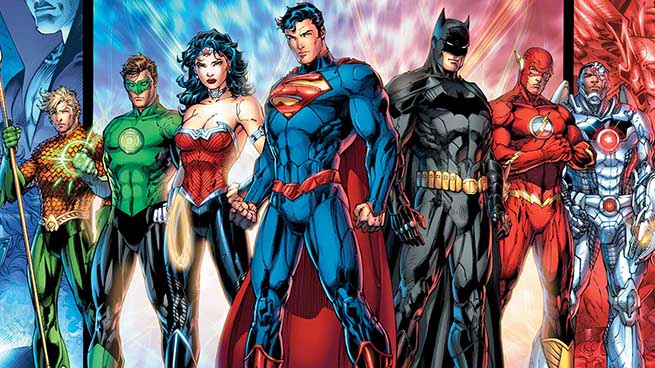 Visual-orgasm facilitator and so-so director Zack Snyder has officially been handed the keys to Justice League, the DC Comics equivalent of that other superhero posse movie, the one that rhymes with … well, nothing, really. It’s The Avengers, and now it’s going to have a direct competitor. The Wall Street Journal reports that Snyder’s Man of Steel sequel — set for 2016 — will in fact “lead into ‘Justice League,'” meaning the crew will be led by Ben Affleck’s Batman, Henry Cavill’s Superman, and Gal Gadot’s Wonder Woman. Let’s see what else this news portends.

1. Ben Affleck’s casting suddenly makes more sense. He’ll be Justice League’s Robert Downey Jr. — the familiar fortysomething we were perplexed to imagine as a major superhero, only to find him anchoring a super-ensemble as its biggest star.

2. Zack Snyder is done dabbling. After starting, like so many others, in the 1990s music video trenches, Snyder’s feature career launched a decade ago with the above-average Dawn of the Dead remake. Instead of letting himself get shackled to any one franchise, Snyder hopped around the general nerd-interest sandbox, adapting Frank Miller’s 300, Alan Moore’s Watchmen, and the ponderously titled animated bird romp Legends of the Guardians: The Owls of Ga’Hoole, and finally birthing his own vile baby, Sucker Punch. Then Batman rejuvenator Christopher Nolan showed up at Snyder’s doorstep, ready to produce a new Superman. Snyder helmed Man of Steel and basically made a big disappointing hash of it, but hey, it made $668 million worldwide and suddenly Snyder was cool with becoming a sequel guy. Now’s the part where he becomes a franchise guy.

3. Where does “ZACK SNYDER DIRECTING JUSTICE LEAGUE” rank on the “JOSS WHEDON DIRECTING THE AVENGERS” fanboy euphoria scale? Low. Smart money has the average devotee’s excitement level hovering around one-sixth — possibly one-eighth — of where it was at on April 13, 2010, the day Whedon and Marvel’s celebrated partnership began.

4. This won’t be Snyder’s first super-posse flick. Yeah — that’s a little worrisome. Watchmen, except for the altered ending, was about as faithful to the source material as a comic book movie could be … and it was still nothing more than sleek, hollow, and eminently forgettable. Cause for concern? (Do we have hopes riding on Justice League in the first place, or do we remain distantly interested until the DC movies start showing some real worth?)

5. Snyder thoughts aside: It’s about time this thing got on track. Justice League almost had liftoff in 2008 with George Miller (Mad Max and, uh, Happy Feet) at the helm, Adam Brody as the Flash, and Armie Hammer as Batman. That bizarre concoction was mercifully aborted. Then Gangster Squad screenwriter Will Beall came aboard, followed by Batman Begins and Man of Steel scribe David S. Goyer. Ben Affleck was rumored to direct, then the Wachowskis. Warner Bros. employees allegedly conducted laughable market research by grilling comic-book store employees. It started to look like Justice League might come right after Man of Steel, introducing the new, post-Bale Batman and dueling with The Avengers: Age of Ultron in 2015. Henry Cavill rained on that parade in mid-2013, saying, “It has to be done very delicately with a lot of thought. So, it won’t be right away. I hope it’s not, anyway.”

6. That Avengers faceoff might still happen, only in 2018 now. The Avengers came to town in 2012, the sequel arrives next year, and we have no reason to believe Marvel won’t keep ’em coming every three years as long as it’s able. Batman vs. Superman (or whatever it ends up calling it) is set for summer 2016. The logical course will be for WB to pump out a few standalone DC films right after and prime Justice League for 2018 — or, if it’s feeling patient, maybe 2019.

7. Get ready for a slew of DC movies. Israeli actress Gal Gadot was cast as Wonder Woman late last year, so she could fill a major role in Bat v. Supes, but there’s been doubt about whether she’ll ever get a solo film. The WSJ says nothing is in the works yet, but “Warner executives said they are warm to the idea.” Sue Kroll, WB’s president of worldwide marketing, says, “With the right script, that could be viable. The world is ready for her.” Wonder Woman or no, with a big team-up spectacle guaranteed, Warner’s got to be planning some mortar movies to pave the way and shore up the cinematic universe. The studio declined to tell the WSJ what other heroes might show up, but young actor Ray Fisher — who played Muhammad Ali onstage in New York last year — was recently cast as Cyborg, who’ll cameo in the Man of Steel sequel and feature more heavily in Justice League. Other Justice League probables include Green Lantern, Aquaman, the Flash, and Green Arrow. Batman vs. Superman has already cast Jesse Eisenberg as Lex Luthor and Jeremy Irons as Alfred Pennyworth, so plan to see them along the way, too.

8. This is by no means a guarantee that Snyder will be too busy for Sucker Punch 2: Sucker Punchier. Remain vigilant.