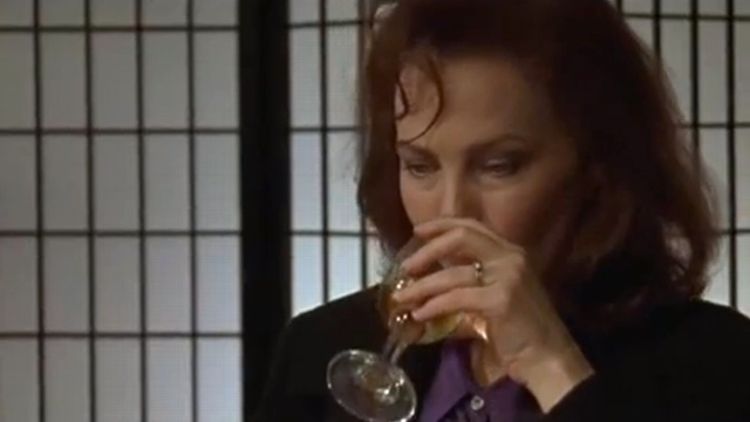 The World’s End arrives in theaters this weekend to finish out the dog days of summer movie season with two things that never fail: alcohol and aliens. We decided to focus on the alcohol part this week and bring you our favorite scenes of liquid intoxication from film and TV. So pour yourself a glass of your favorite Wednesday-afternoon-appropriate beverage and join us for a casual ‘Tube crawl.

Bryan Curtis: “Madame,” the headwaiter says of Rick, “he never drinks with customers.” Nope, Rick drinks with his regrets. Humphrey Bogart’s drunk scene is often called the most quotable in the movies (“of all the gin joints … ”). It’s also the most archetypal.

Rick wants his friend Sam to drink. Sam doesn’t want to drink. Sam wants Rick to go home. Rick doesn’t want to go home. (Rick says he’s never going to bed.) Rick has odd questions: “What time is it in New York?” Rick wants to hear music. Sam thinks hearing that song is probably a bad idea. Yet Sam won’t leave: His duty is to be there, as confidant and punching bag, while Rick ties one on. Anyone who hasn’t found himself playing both the Rick and Sam roles, please belt out “Le Marseillaise.”

Tara Ariano: Perhaps what gives this drunk scene from Bridesmaids its immortal magic is the fact that it’s not only a drunk scene: Kristen Wiig’s Annie has had a tumbler of scotch, true, but it was to wash down a couple of Xanax. Is she wrong to wander into first class from coach? Technically, yes. But that curtain should be open, because civil rights. This is the ’90s.

Give him the keys.

The Lord of the Rings: The Return of the King

Holly Anderson: You may find it difficult to relate to the Lord of the Rings films if you are not preternaturally beautiful and handy with a bladed weapon, but what do any of us want in life, really, more than what is on display here? To be tipsy, and singing of home, and doing a secret handshake with our disgusting hairy feet on a bar table with our best pal. And also to have Ian McKellen as our super-intimidating but relentlessly genteel designated driver.

Emily Yoshida: Shh — girl talk: In the commentary track for Waiting for Guffman, director Christopher Guest says that Catherine O’Hara does the most inspired drunk he’s ever seen, and in the 16 years since then it has gone on to be more or less an accepted fact of comedy. The head wobble, the unfocused gaze, the slightly droopy hairsprayed bangs that tremble as she takes a nice long hit of the Chardonnay — all flawless. For me, like for anybody who discovered Guffman and Guest’s work the summer before high school started and proceeded to wear out their VHS copy of it, Ron and Sheila feel like people I know at this point (of course Ron would be into Faces of Death), and I like how in her inebriated state Sheila goes straight to the two things that cause her the most psychic anguish: venturing outside of Blaine and marrying the first guy she ever slept with. We’re talking about China now.

netw3rk: Some of the things that occurred during the filming of Francis Ford Coppola’s 1979 Vietnam war spirit-quest Apocalypse Now: a typhoon, Marlon Brando showing up carrying 300 pounds and not having read the script (not that there was one), actual cadavers in the prop room, tropical diseases, Dennis Hopper asking for and receiving a kilo of cocaine, Coppola threatening suicide and having a nervous breakdown, the crew quitting, and Martin Sheen having a heart attack. For the opening scenes of the film, Coppola filmed — and borderline exploited — a soused and incoherent Sheen, egging him into a primal display as Sheen thrashed around a hotel room in bikini briefs, smashed a mirror, and bled profusely. The result: six Academy Award nominations. Prost!

Tess Lynch: The moral of this Scarface scene is that you’ll still be pretty cogent if you end your bender with a cup of espresso (or, you know, “espresso”).

Katie Baker: What a letdown it is, that first illicit sip of beer. This is what all the fuss is about? We may not have all made fools of ourselves at a party by screaming “THE BEER HAS GONE BAD!”, but it’s crossed everyone’s minds. Next thing you know, though, you’re standing on a piano singing Guns n Roses. Next to the belligerent police chief in Super Troopers and the wine-snoozy Bree on Desperate Housewives, the most accurate depiction of getting hammered that I’ve seen on stage or screen is courtesy of Charlie Korsmo, who played, in the words of one YouTube commenter, “the original McLovin” in the seminal 90’s teen house party flick “Can’t Hardly Wait.” I’ve mentioned this on Grantland before, but it bears repeating: Just like his character in the movie, Korsmo the actor basically crowd-surfed off into the sunset. Can’t Hardly Wait is the last entry on his IMDB page; from there, he went off to MIT and Yale Law. It’s just like real life, though: it doesn’t matter how much success he goes on to have in the world. To all of us who knew him back when, he’ll always be the guy who got drunk at a party and screamed I CAN’T FEEL MY LEGS.

The Decline of Western Civilization Part II: The Metal Years

Steven Hyden: “I go, Mom, can I take rock guitar? She says, no you can’t, you’ll turn into one of those drug-infested rock stars, haha! I’ve had women, like, in my hotel room, four of them at a time. I say, ‘Hey, take your drawers off.’ And if they don’t, then I call my security guard next door and he throws them right out, pfft, get outta here. If you can tour one year, pfft, it will take four years off your life. I’m a piece of crap. Health? What do you mean health? I’m what they call an old fuck. Look at my mom? Shit! Here, mom, have a drink. I’m a happy camper, haha! I’m a full-blown alcoholic. I enjoy drinking, I just enjoy life. I’m the happiest son of a bitch and motherfucker there ever was.”

Megan Creydt: Old School came out during my senior year of college. I know the movie by heart and love it unconditionally, and to this day can’t get through a (now frequent) Home Depot run without thinking fondly of this Frank the Tank scene.

Amos Barshad: This Superbad table read, of the climactic drunken-awkward-party-sex between Evan and his beloved, reveals many important factoids. First: Apparently, the greatest line in the scene, and quite possibly in movie history — “I am gonna give you the best blow j ever … with my mouth” — was not even in the script originally. Second: Emma Stone is a proper lady, and has a hard time hearing the phrase “eat me hard” without covering her face in embarrassment. Third: Wait, Paul Rudd was gonna be in this? Or does he just come and hang out at all these dudes’ table reads?

Charles P. Pierce: “It was Christmas Eve, babe … in the drunk tank.”

Every year around the beginning of December, up at my local, at my request and that of Roisin, Galway girl and the world’s greatest bar manager, the Monday-night trivia DJ will drop this into his usual playlist. Roisin and I generally sing along, although the line about “The boys in the NYPD choir, still singin’ ‘Galway Bay'” is always hers, for obvious reasons. To this day, the combination of Shane MacGowan’s dipsomaniacal pathos, and the bruised-angel sweetness of the late Kirsty MacColl — “Happy Christmas, yer arse, I pray God it’s our last” — riding a melody that seems to date all the way back to the Iron Age can bring you back to a million nights and a million snowflakes dancing in the pale yellow of the streetlights, and a couple dancing to memory, all the way down the alley and back.

Jonah Keri: “To alcohol! The cause of … and solution to … all of life’s problems.” When you’re toasting while perched precariously on a stack of barrels, I’m going with “cause of.” Homer’s pending loss of balance notwithstanding, let poor Kirk Van Houten go nuts if he so chooses. Poor guy needs a soft landing after, well … you know.

Brian Phillips: Is he drunk in this scene? He can’t be. He doesn’t take his first sip of bourbon till around the 1:55 mark, and even then, it’s unclear whether the drink exists; magical death-bourbon served by a time-destabilized ghost is not technically a regulated substance in Colorado, even if you buy it on credit. On the other hand, there’s not a moment in Stanley Kubrick’s film about (among other things) alcoholism when Jack Torrance is verifiably sober, from the inciting backstory incident when he wrenches his son’s arm to the final shot of his frozen corpse lolling wastedly in the snow. Here, Nicholson’s self-generated cloud of insanity pheromones is the equivalent of a bottle of bad moonshine. He’s full of himself, unbalanced, swaggering in place, leering at the world, and creepily riffing over several of the movie’s big themes — genocide (“the white man’s burden, Lloyd”), the horror of parenthood (“I love the little son of a bitch”) — without making anything clear. In this scene, Jack’s the last of the great midcentury American drinkers, killers all, and his slow-burn unraveling ensures that, more than anything else, the audience also feels drunk.

Game of Thrones Offseason Report: What Have Your Favorite Westerosians Been Up to This Summer?