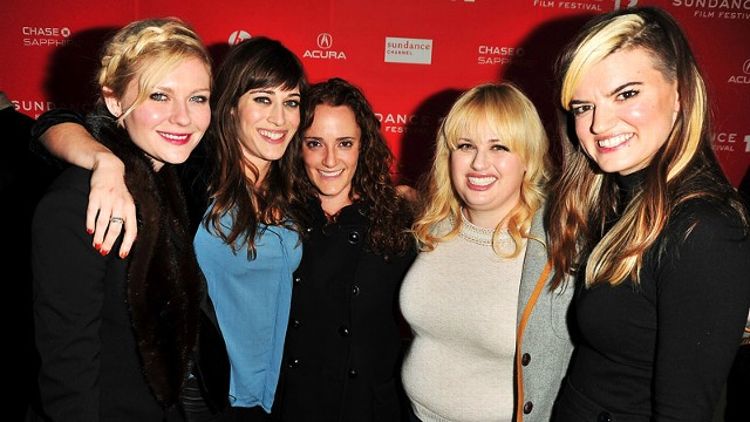 Since Bachelorette premiered Monday night at Sundance, it’s been plagued with a singular obsession from the media: Is it, or is it not, like Bridesmaids? Trying to figure this out might warp your brain. Check it out:

• Raunchy ‘Bachelorette’ May Be the New ‘Bridesmaids’ (Does the C-Word Count?) [Reuters]

• Sundance Scoop: Is Kirsten Dunst’s Bachelorette the Next Bridesmaids? [E!]

• Will Ferrell-Produced ‘Bachelorette’ Is Not Quite ‘Bridesmaids’ [/Film]

So: Loved Bridesmaids, but don’t want to emotionally invest yourself in a movie that might merely be sort of like it? Let’s see if we can’t figure this out once and for all.

The black comedy stars Kirsten Dunst, Lizzy Caplan, and Isla Fisher as former high school cool girls dealing with the fact that their least-cool friend (Rebel Wilson, who dropped a scary-good cameo in — uh-oh — Bridesmaids) is getting married first; drugs, sabotage, and general chaos ensue. To recap: We’ve got a wedding, we’ve got wedding-related envy, we’ve got ladies being funny, we’ve got ladies misbehaving, and we’ve got (probably?) redemption/lessons learned. So far, so Bridesmaids-y.

Then again: Writer/director Leslye Headland adapted the flick from her off-Broadway play, which predates Bridesmaids. Also, this movie has cocaine in it! There are other differences. Says Headland, “I admit that I am a little concerned about expectations. My movie is nasty, dark, complicated, and a little bizarre. If people come in expecting Bridesmaids they may have a heart attack. Or they might hate it and leave.” Adds Caplan: “If we use that movie to sell this movie it’s almost like we’re tricking them. It’s a lot darker and the characters are written in a much more unlikable light, even though they’re redeemed at the end. Leslye Headland is not afraid of writing hateful characters and people who are easy to detest in certain moments.” And according to Vulture’s review, the comparisons disappear after “ten minutes: Kristen Wiig may have been a meltdown-prone maid of honor in Bridesmaids, but the women of Bachelorette make Wiig seem like a Girl Scout. In fact, they’re even crueler and more proudly awful than the amoral female protagonists of Bad Teacher and Young Adult.”

In reading all these comparisons, one thing sticks out: More than the general plot similarities, what seems to draw the flicks together is that they both have women being gross and funny. Generalizing, the reaction seems to be: Bridesmaids did it first; Bachelorette is doing it second. This is bizarre! Is Bridesmaids really going to be positioned historically as the very first thing that “allowed women to be gross and funny”? Yes, Bridesmaids made lots of money, and that couldn’t have hurt the green-lighting of all kinds of other female-fronted comedy. But Bridesmaids as some kind of “ultimate proof” that women can be funny like dudes? Sorry, no. At the very least, as Judd Apatow put it early last year, “At Saturday Night Live, the women have dominated the show for almost 10 years at this point.”