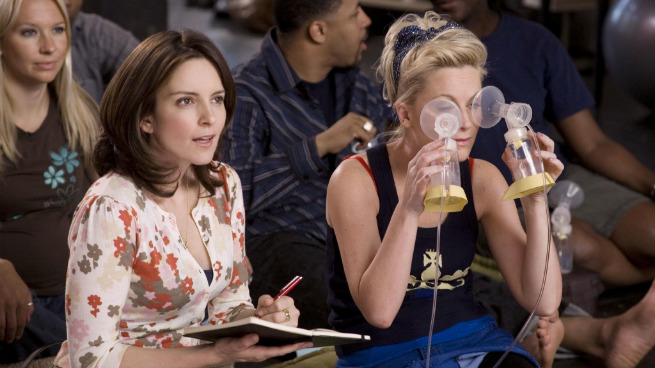 Throughout the history of comedy, there has been an overblown focus on men behaving badly. Try to imagine a female version of Adam Sandler’s perennial idiot boy, and I don’t just mean Sandler in his Jack & Jill drag. Even in movies directed at women, the heroine is stereotypically a type A businesswoman whose love life is in a shambles. Sometimes she trips, but in a cute way, not a knock-your-front-teeth-out way.

But no more is the dynasty of child-men without a female counterpoint; it was just announced that Tina Fey and Amy Poehler will team up again for The Nest, a comedy about two adult sisters who live with their parents and decide to throw a killer party. Essentially, it’s Step Brothers with women. And I can’t wait! As much as I enjoy them as their sitcom working-woman alter egos, Liz Lemon and Leslie Knope, I am unbelievably excited to see these two play morons. Poehler has always had a particular gift for playing complete weirdos, which she showcased on Upright Citizens Brigade and SNL. On Parks & Rec, she plays a more recognizably human character, as is necessary to sustain a sitcom over multiple seasons without wearing thin. But man, sometimes I just miss seeing Amy play people like Amber the hypoglycemic one-legged prostitute with “mad skin tags.” Fey is the ideal straight (wo)man for Poehler to bounce her stranger instincts against, and they were great together in the somehow underrated surrogate mom-com Baby Mama.

It seems like in recent times, the culture has expanded slightly to accommodate the idea that ladies can be dumb-asses, too. In anticipation of The Nest, here are 10 of our favorite movies and TV shows about female fuckups:

Ficitonal female fuckups, like their male counterparts, rarely view themselves as fuckups. Rather, they think of themselves as being awesome and the people who do not recognize their awesomeness as idiots. In Romy and Michele’s case, rightfully so. Why would you want to live in your cookie-cutter hometown where everyone in the onetime “A group” is already married and living in the suburbs by the time of your 10-year reunion, when you can share an apartment with your best friend, wear latex dresses, and live by the beach? Mira Sorvino as Romy and Lisa Kudrow as Michele represent for two completely different kinds of airheads, with equally super funny voices.

Michelle Williams and Kirsten Dunst are also brilliant as two distinctive kinds of dumb blonde in Dick, the Watergate comedy that is very hard to Google. While Dunst’s Betsy is bubbly and flirtatious, Williams as her best friend Arlene is adorably dull-witted. Just watching what Dunst and Williams do with their faces in every scene is hilarious. Plus, the movie stars an ensemble of comedians in All the President’s Men garb: Will Ferrell as Bob Woodward, Bruce McCullough as Carl Bernstein, Dave Foley as Bob Haldeman, Harry Shearer as G. Gordon Liddy, and Teri Garr as Arlene’s mom!

The ahead-of-its-time faux-reality docu-sitcom may be coming back to HBO in the near future. But there’s no time like the present to revisit the original series. Kudrow plays former sitcom “It” girl Valerie Cherish, who is more delusional than she is talented, and also more doggedly optimistic than anyone sane could knowingly be. Allow yourself to really nestle in the unpleasant feeling of failure.

Just one among many tour de force performances from Anna Faris, champion of the funny blank look. As heroine Jane in Gregg Araki’s Smiley Face, Faris bumbles around town in a pot-brownie haze, struggling to accomplish a range of easy to more difficult tasks. Faris is the best movie stoner since Cheech and Chong.

Credited with proving that both women and men would see comedies about women if they were funny enough (and if Judd Apatow told them to), Bridesmaids is super fucking funny and a great movie to put on in the background on cable. Every time you look up and see it, you will laugh at something. Everyone is great in this movie, but especially Kristen Wiig, who cowrote it with her writing partner Annie Mumolo. Get ready for some funny uncomfortable shit, in every sense.

Charlize Theron plays Mavis, perhaps the biggest fuckup on this list, who veers into sociopathy when she decides to return home and win back her high school sweetheart in Diablo Cody’s incredibly dark comedy. Young Adult is a fearless movie, and Theron is fearless in it, daring you to like her at every turn.

Outsize ambition, secret neuroses, and open self-sabotage plague all the girls of Lena Dunham’s Girls. The third season saw its four heroines finally deciding to get their shit together, kind of getting there for a minute, and then sliding all the way back down the chute to the bottom again to stew in their own mess.

Mary Jane Paul, the protagonist played by Gabrielle Union on BET’s hit original dramedy, isn’t a traditional fuckup per se. She’s more of a fuckup in the Mary Tyler Moore style: great at her job but a mess in her personal life. But I’m pretty sure Mary Tyler Moore never stole any sperm like Mary Jane does, although who knows!

A high-profile, high-ranking fuckup, sure. But Selina Meyer (Julia Louis-Dreyfus) is a total fuckup all the way.

I dreamed of a world on the screen that looked like the real one, populated with chill women who refer to everyone as “dude.”  Broad City is that world. May it run forever.

A Viewer's Guide to All Three Cuts of 'Anchorman 2’: Which Version Is Best for You?