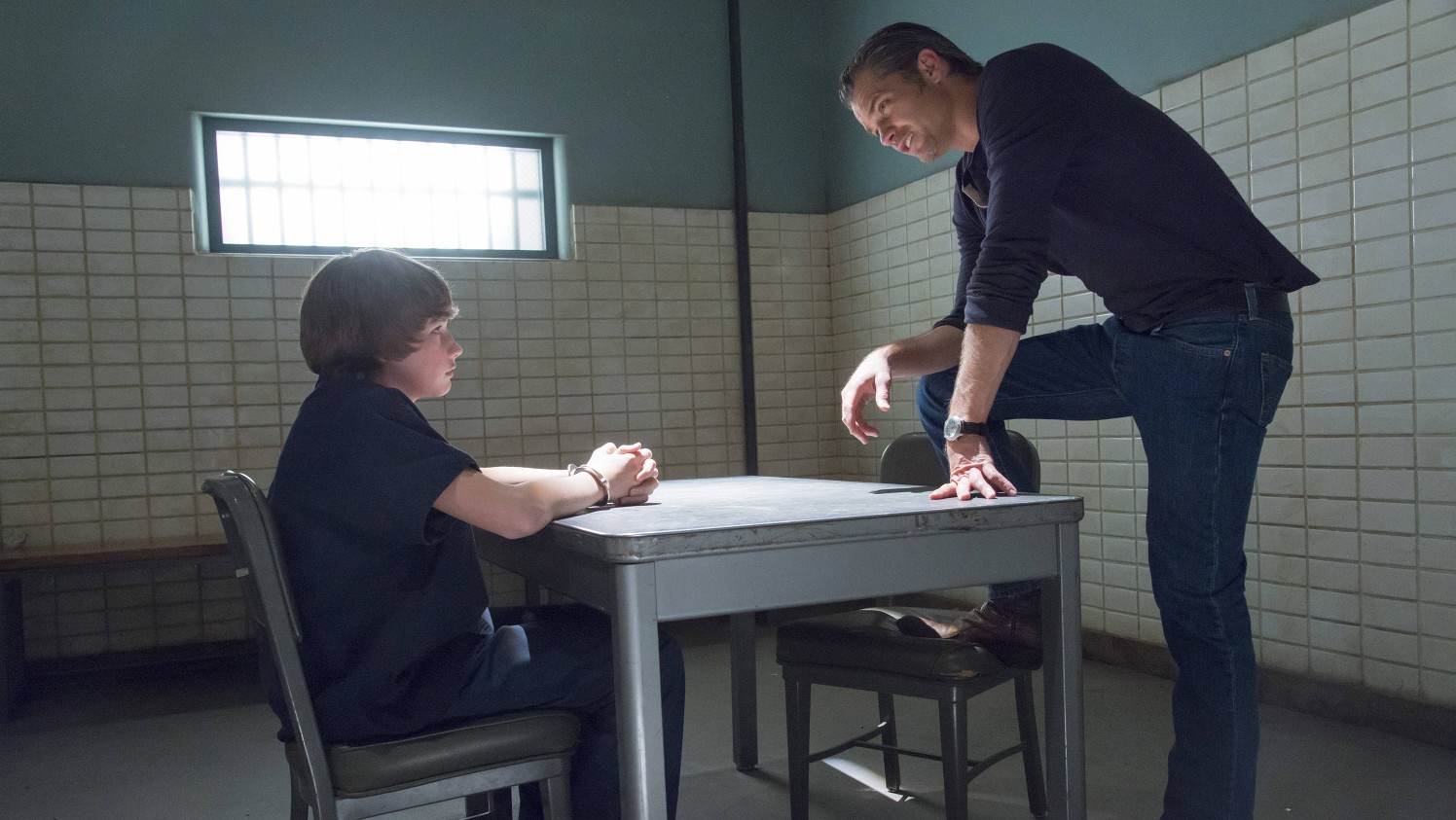 Previously on Justified: Daryl very obviously shot Art and got Kendal to take the fall; Raylan arranged for Kendal to be tried as an adult; Duffy faked Boyd’s death to the Yoon-Ruiz concern; Boyd tried to get his henchbillies out of town, but the cartel caught Jimmy; and Raylan threatened Boyd with an inundation of every piddly charge under the sun. Everybody sent everybody else chasing after a pile of heroin which at this point could fit in a jar of apple-pie moonshine.

Very, very previously on Justified: Raylan was relegated to Kentucky, where Art told him, “It’s a small office. I’m concerned when we switch brands of coffee.” Raylan shot Boyd and accidentally-on-purpose missed his heart. Boyd asked Raylan, “At any point when you were looking at that gun thug, did you see your daddy’s face?” Ava glowed from behind her eyes and under her skin.

This week, in the finale: Adam Arkin directs, which tends to produce the series’ better episodes; bad Daryl gets a bad death; and just about everybody gets a One Last Job setup for the show’s sixth and final upcoming season.

As the Crowe Dies

With Raylan reasoning that Daryl can’t hang himself without rope, Mr. Crowe Jr. is turned loose, and Tim trails him. Those two get a fine bit of peacocking in the street, with Tim sporting a truly unsettling Cheshire Cat grin, right before Daryl gets the best of his pursuer in a brief car chase and disappears.

Raylan’s off visiting Kendal before his arraignment, and his latest attempt at surrogate parenting actually bears fruit, as Kendal all but admits his uncle set him up to take the fall for Art’s shooting and an eavesdropping Wendy allows herself to finally believe he’s innocent. We couldn’t help but wonder whether this was all about to take a REAL dark turn and Raylan might be setting up Kendal to kill Daryl himself, but no: The marshal has a better message for Kendal, framing his becoming a lawman as an act of rebellion.

It falls next to Wendy to ensnare Daryl in his web of lies, and she does a hell of a combo move on him, coming in quietly seething that she wasn’t told of his plan, ratcheting up her fury, then hitting her brother with an apologetic bout of tears. It works, and Daryl lays out what everybody’s been suspecting: He shot Art, thinking Kendal would do juvenile time if he confessed in Daryl’s place. Then, very quickly, the following things happen: Wendy reveals she’s been recording the conversation, Wendy pulls a gun on Daryl, and Raylan turns up. You get the sense the ensuing shooting was not part of the plan, but Raylan sure doesn’t seem to mind as he watches Daryl bleed out with something approaching fascination. (Has he done that kind of thing since shooting Boyd?)

And if we could’ve asked for one more thing here, it’s for just a few droplets of blood to have spattered on the “Hang In There!” kitten poster, the pinning up of which was season’s most poignant moment. And that’ll about do it for Daryl Crowe Jr. We will remember him as we liked him best: riding his airboat in the season’s first hour, unable to be heard.

And here comes the tidy happy ending, with Art, now awake in his hospital bed, exchanging jabs with Rachel over his parking spot and telling Raylan there’s a spot in the marshals’ service for him back in Miami. The venom, if not the fatigue, is gone from Art’s and Raylan’s voices. There’s another video chat with Raylan and Winona and the wee Raylanspawn, and promises of reunion. And there’s just a little too much time left in the episode for Raylan to be assured of keeping his promise. 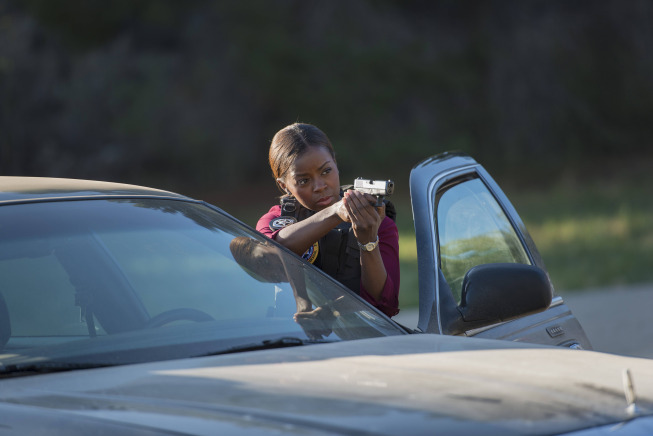 Nobody Is Good at Heroin

It’s too quiet when Boyd walks into Johnny’s, and his bleak face just breaks when he sees Jimmy secured to a chair with an excessive amount of duct tape. Jimmy’s death is the most emotional on a long, long list of murders this season, and it’s not just the tears, or the comfortable chemistry between Walton Goggins and Jesse Luken, so much as that Jimmy has survived a POISONOUS SNAKE TO THE FACE but not running with Boyd. Next on Ruiz’s to-off list is Daryl, and he offers Boyd a quick death for a quick delivery. Through a bit of BlackBerry-contacts chicanery, Boyd gets Tim, Rachel, and Ruiz’s crew together at Ava’s house; a merry shootout ensues, and Boyd himself downs the last bad guy while handcuffed. (Lest this seem too much reward for a man who’s done so much stupid shit this season, Boyd is also pelted with broken glass during the encounter, and has to scuttle sideways toward his fallen target to keep the gun pointed at him, like he’s crab people.)

Boyd’s patching up Ava’s porch when the phone rings. It’s Geist, who’s bringing Ava home from jail. It seems her former cellmate in county lockup and Officer Half-Pint have both recanted! Isn’t that funny! Isn’t life funny? Isn’t this all just a little abrupt?

I’m leaving, says Raylan. Not just yet, says Vasquez, who’s hatched a plot with Rachel to construct a RICO case against Boyd. (Say, remember how what put Boyd behind bars in the first place, before Season 1 even began, was tax evasion?) Why didn’t you say so, says Raylan, and the episode could’ve satisfactorily ended there, but 5.13 is a fruit-on-the-bottom yogurt cup, and we’re just getting to the good stuff.  Because over at the (recovered, somehow?) Wynn-ebago, Katherine and Duffy are weaving a plot of their own, and she puts on her most murderously girlish smile to pitch it to Boyd: “You were lousy at running heroin, Boyd Crowder, but from what I’m told, you are really good at robbin’ banks.”

And there’s just enough time for a final scene at that bridge, with Raylan and Ava meeting in the middle. Is it love?? IT IS NOT. Ava’s been released from the state pen directly into the plot to engineer Boyd’s downfall. “We get the feeling you’re not playing ball, it’s gonna be me who puts you back in.” Ava doesn’t have to say she’s never going back. “Everything’s gonna be fine,” says Raylan, whose shoulders are a little hunched in his coat as he walks back. Ruby Friedman wails the opening lines of that one song we all know, and the lights go out.

7. “Better I get shivved in a dark hallway, bleed to death on a cold prison floor?”

9. “So while I appreciate your concern, this here? This may as well be a slow night in the champagne room for how comfortably erect I’m gonna be watching your bitch ass squirm about.”

We Have Some (Final) Thoughts

To say this wasn’t Justified’s strongest season isn’t even really a slam. Even at its most frustrating and convoluted, it’s still one of television’s best things going. Much as we appreciated the show finally getting some richly deserved airboating footage, this is a season that lost its way more than once, that shortchanged so many of its regulars and their carefully nurtured relationships in favor of a now mostly dead guest cast of thousands.

But: It’s served its grander purpose, now, to line up everybody for Season 6, and to telegraph what those last 13 hours are going to involve, and to get us hooting and hollering for what’s ahead. (Did you get goose bumps at that latest cover of “You’ll Never Leave Harlan Alive”? You did too.) And in the service of that mission, the fifth-season finale delivers, and delivers, and delivers. Justified, and on a broader scale the work of Elmore Leonard as a whole, exists by spinning out well-crafted variations on archetypal American stories, and of these tales, what creates better tension than The Guy Coming Back for One Last Job? How about Two Guys Coming Back for One Last Job, Raylan maybe peeking past it every now and then to some South Florida sun, Art looking ahead to retirement, and also they might still hate each other? Boyd’s basically been rebooted by his final scene. Ava’s headed for some kind of amalgamation of a One Last Job/Betraying My Man/And Maybe Double-Crossing My Other Man plot. And Rachel’s and Vasquez’s roles as the architects of this latest mission hopefully foreshadow a much-needed return to the core cast of Justified, who are never so good as when they’re all together getting playing time in this universe they’ve built.

It’s a natural problem, having to keep coming up with things for Raylan and Boyd to do to each other without killing one of them. There’s not a whole lot left for them to do besides go right at each other. Good news: They’re about to. And as puzzling as we’ve found some of the decisions this season, there’s not much better than Justified when it’s on its game, which gives us a lot of faith, months ahead of time, in a final campaign where there won’t be any room for dicking around. Thirteen more hours remain for us to spend in Harlan, after everybody in it has had a bath, a nap, and hopefully a couple haircuts. We’ll see you then.