‘The Comeback’ Might Be Coming Back to HBO, More Relevant Than Ever 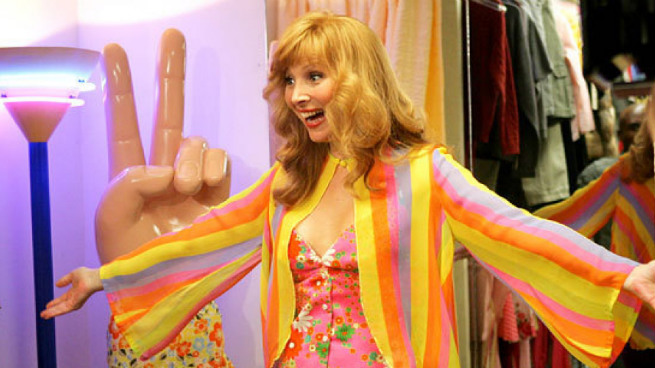 When The Comeback debuted in June 2005, the New York Times called it “the saddest comedy on television,” and they were right. The show aired for a single season before it was canceled, probably mostly because watching it was such a punishing experience. The Comeback’s hero, Valerie Cherish (Lisa Kudrow, one year emancipated from Friends’ 10th-season finale), was delusional and narcissistic, but somehow that didn’t make it any easier to see her get dealt escalating ego-punches over the course of 13 episodes; she sucked up to her abusers and neglected her allies, and beginning with the pilot, the depressing unraveling of her life (both personal and professional) seemed inevitable. It redefined TV cringeworthiness, but it was memorably haunting. I grew to love it fiercely, though I understood its failure to thrive.

Last week, Deadline reported that The Comeback may be resuscitated for an HBO “limited/event series” from its original creator-producers Kudrow and Michael Patrick King (in keeping with the current trend of reviving dead series, à la Veronica Mars and Arrested Development). Among Cherish’s possible future adventures: classes at the Actors Studio and a spin as a Real Housewife. The Deadline comments are uncharacteristically jubilant, and The Comeback’s cult status may be due to the show having aged so well. Initially, it was stuck in a time slot following Entourage; viewers in 2005 had no idea what to make of Cherish’s much darker Hollywood diorama, which featured little in the way of aspirational levity or escapism. Nearly nine years later, we’ve witnessed the birth and decline of The Real Housewives franchise (which began with Orange County in 2006) and gained access to ever-expanding online paparazzi coverage of the humiliations of entertainment industry has-beens (among whose ranks Cherish would never count herself — but we, as viewers, always knew she was one of them). We now know exactly where we’d see Cherish if she lived outside The Comeback script: on Rachel vs. Guy: Celebrity Cook-Off, as a token celebrity on Survivor, and paying her publicist to leak scandalous emails or upskirts to the press. We are more familiar now with the language the series was speaking nearly a decade ago.

The show was like an onion of fake television programs. The outer layer was The Comeback, the show itself, but within it was another creation with the same title — the reality show that featured Cherish, her husband, Mark (played by Damian Young and otherwise known by his pet name, Marky Mark, though without a Funky Bunch to back him up when Valerie ordered him to re-create La Scala’s meticulously chopped salads for her), their housekeeper Esperanza (Lillian Hurst), and Valerie’s stepdaughter, Francesca (Vanessa Marano). Peel those back and you have Room and Bored, Cherish’s comeback vehicle, which she auditions for under the assumption that she’ll be playing some kind of sage older roommate among a group of sexy singles — one of her first embarrassments is the retooling of this role into “Aunt Sassy,” a naggy landlady dressed in Juicy jogging suits who is always the velvet-encased butt of the joke (“I didn’t need to see that!”). Within all these layers, at the bulb’s center, is the kernel of redemption of Cherish’s career, a long-dead sitcom titled I’m It! that’s framed as being a kind of proto–Ally McBeal, with Cherish in the starring role. I’m It! was as fully formed as Garp’s The Pension Grillparzer: It had its own shark-jump (a monkey attorney), its own scandal (a Rodney King joke), and its own disappointment (it never went into syndication).

That Cherish can’t accept her outsider status when she finds herself trying to make friends with her Room and Bored costars (Malin Akerman, Kellan Lutz, Jason Olive, and Kimberly Kevon Williams) would appear to be the saddest part of her workday, but wait, there’s sadder! The dynamic between Valerie and the male-dominated Room and Bored writing staff becomes so fraught that it begins to resemble a Greek tragedy. The writers, after all, control Cherish like a puppet, and while some of them have the decency to listen to her concerns, one does not. Paulie G. (Lance Barber), a Room and Bored creative higher-up, becomes trapped in a power struggle with Cherish so poisonous that it culminates in the release of bodily fluids. (If I can’t force you to start at the beginning, go ahead and skip to 25:00 in the penultimate episode, but arm yourself with Spoiler Guard and don’t be eating lunch.) Of course, she has her allies — Mark, her hairdresser/friend Mickey (Robert Michael Morris), and to some extent Jane (Laura Silverman), the director of The Comeback reality show — but the lack of control Valerie wields over her image onscreen, both as Aunt Sassy and as Valerie, is her most pitiful attribute, and her most modern. We’re used to that now.

There is Valerie dressed as a cupcake, forced to traipse back and forth between her mark and the refrigerator again and again in front of a studio audience because she has failed to be winning, to be socially adept, but most of all to be young and youthfully attractive. Her career has already died, and she is a joke. But then here she is again, supposedly in control of her own destiny by forming the plot of her own reality show, failing even more badly. Her sex life suffers, her attempts at buzzworthy social engagements always end like Mary Richards’s ill-fated parties, and she mercilessly alienates anyone with whom she has an actual relationship in the hope of assisting her off-the-mark ambitions.

There was something unseemly about it all in 2005, whereas now we have the capacity to understand certain things better: the struggle to recuperate from irrelevance as a celebrity, and the forms of entertainment we’ve come to accept as a part of life. When The Comeback first aired, Valerie appeared to be much more a victim than she would today. The world she inhabited wasn’t as accustomed to that lucrative sellout niche, and by now we’ve seen much worse. One of the only admirable aspects of Valerie was her belief in herself, which she clung to with her gel manicure even when the entire world had turned against her. She hooked her talons in the eyes and mouths of her family and (very few) friends and attempted to climb back out into the light, and over the course of one gloriously weird season, it forced us to confront the question of what to do when your time has come and gone. Do you downsize to a Palm Springs condo and forfeit the spotlight, or do you submit to the clown makeup and make a punch line out of yourself? Either is uncomfortable to watch, but for Cherish in particular there was no other way out. She just headed toward the light.

I first came to The Comeback when I was auditioning for commercials fresh out of college. Revisiting it, I watch through the eyes of Paulie G. There is something particularly poignant about this show if you work in any kind of media, and especially if you find yourself at a point in your career where you have enough experience to be cynical toward “baby girl” Juna but haven’t yet reached the point where you’re looking back wistfully at your first big success. You stare down a long tunnel and count the number of people in front of you and the number of people behind, wondering if one day you’ll wind up enmeshed in self-parody — clueless, lost, out of touch. It’s terrifying to consider what happens to your concept of self when your artistic pursuits become obsolete. Valerie Cherish in her forties thinks of herself as Valerie Cherish in her twenties, but our mental images of ourselves are always stuck on our primes. She was precociously performative in 2005, always stubbing her toe in pursuit of a good edit.

Kudrow’s follow-up, Web Therapy, which she created and stars in as iChat therapist Fiona Wallice, retains much of The Comeback’s dark humor and tone (and celebrity cameos), but lacks the sentimental impact (oh, Mickey, how I felt for you). The Comeback was doomed from the start: It arrived too early and didn’t pair well with the lead-in’s lingering Johnny Drama aftertaste, but most of all we, like Valerie, just didn’t want to see that. “That” was still a sad and unexamined thing, a punch line in a foreign language without even a can of laughs to tell us whether it was supposed to be funny or horrible. It was intended to be both; we know that now. King has suggested a possible reboot might explore “Valerie getting what she wanted and what fresh hell that would be.” It could be Valerie’s moment, the one she’s always waited for. No hell could be fresher.

The New ‘X-Men: Days of Future Past’ Trailer: If I Could Turn Back Time ...