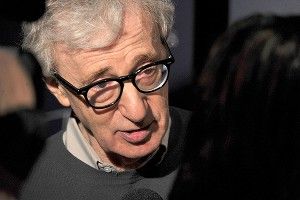 The last time Woody Allen acted in a film he did not direct, the year was 2000, and the movie was Alfonso Arau’s Picking Up the Pieces. But now he’s back, and in a big way. Somehow, miraculously, John Turturro has convinced Woody to star alongside him in a nutso project called Fading Gigolo (which Turturro is also writing and directing). Let’s let the straight-faced Variety description take it away:

Well then! It’ll be nice enough to see Allen in the Hasidic gear, a sort of shout-out to the family-dinner scene in Annie Hall. And it’ll be even nicer seeing him sell John Turturro’s body for money! Turturro’s directorial record might be unheralded: His last film was the 2010 Italian music documentary Passione, and before that was the somewhat maligned 2005 musical Romance and Cigarettes. (And let’s face it: His career peak will always be as the Jesus Shuttlesworth-courting Coach Billy Sunday). But it’s Woody Allen as a bumbling Hasidic pimp! What could go wrong?

Smacketology: Day 3 - The Sweet 16 and the Rise of Bubbles