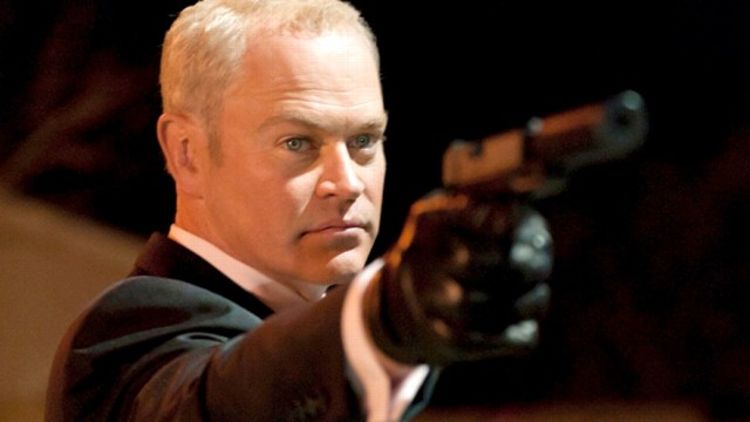 People get framed for things, alliances shift, and Wynn Duffy … dyes his hair?! All this and more in “Watching the Detectives,” the latest episode of Justified.

It turns out that when Quarles tracked Gary down in Oklahoma, it wasn’t just to have a nice drink: It was so he could throw Gary in the trunk of a car, drive him back to his former marital home, shoot him on the lawn, and make it look like Raylan did it. And this is AFTER Sammy Tonin’s already faked a call, knowing the FBI is listening, in which he claims Raylan is dirty and working for Boyd. Basically, Raylan is twice-boned here. Actually, thrice: Not only did Quarles kill Raylan’s ex’s second husband and leave the gun out to be found, he loaded it with the bullet Raylan threw at Duffy earlier this season, so his fingerprints are on it. As frame jobs go, it’s not bad. Anyway, Barkley backs off his pursuit of Raylan when it comes out that the intel suggesting that Raylan is dirty came from Tonin, and Raylan is temporarily cleared of Gary’s murder … but not before taking possession of the murder weapon from Winona, who found it in the freezer at her old house. Rather than dropping it off a bridge, as Winona suggests, Raylan keeps it — the better to use its existence as a threat against Duffy.

“When The Guns Come Out”

As for Harlan: Who knew so many people would care so much about a sheriff’s uncontested reelection? Tanner is re-deployed as a double agent, but he barely even has time to do anything before Napier goes out to start his cruiser, gets back out to get something out of the police station, and narrowly escapes injury when the car blows up. The obvious culprit is Boyd, who’s backing Napier’s opponent, and he’s swiftly arrested AND perp-walked on camera. Except it turns out Napier staged the whole thing with Tanner, who planted the bomb to frame Boyd.

So now Boyd is out of the way, at least for now, even if the story that he’s turned Raylan didn’t stick to the marshal. Tonin has heard from his father that Quarles is bringing too much attention to their activities with his anti-Raylan machinations — far too risky when they already know the feds are watching. So Quarles is out. Out on his own, Quarles decides his best option is to join forces with Limehouse. And thus have the season’s two Big Bads become one.

Only someone who’d never met Raylan could think he was seriously dirty. He’s just kind of crooked! (To quote Homer Simpson, “It means he gets results, you stupid Chief!”) Regardless, just because Barkley — and, to a lesser extent, Vasquez — is off his back for now, given that there are five more episodes to go this season, one or both of those dudes will probably come back.

Still on Raylan for a second: Let’s talk about the gun that killed Gary. Winona’s guess that Raylan will dispose of it is so simple-minded; Raylan COULD do that, but that’s what you or I would do with a weapon involved in a shooting of which you or I were suspected! Raylan could turn it over to the Lexington Homicide cops — presumably once he’d come up with a plausible lie as to why he has it — but then he’d lose that advantage over Duffy and Quarles. Raylan could also keep it, hide it really well, and bust it out at a later time to surprise Quarles and/or Duffy with it. But no: Of course the Raylan we’ve gotten to know over the past two and a half seasons would get it, keep it, and make it explicitly clear to his foes that, in this matter, they did not best him. The resolution (for now) of this plot thread, and the chess moves that preceded it, form a microcosm of what makes this character, and show, so great.

Another moment that encapsulates Raylan’s coolness: when Detective Garrity, one of the cops investigating Gary’s murder, responds to the tale of Raylan throwing bullets at Duffy by gushing, “That might just be the coolest thing I’ve ever laid ears on!” Of course he’s right, but it’s always fun when characters within the show appreciate Raylan the way we at home do.

In the thick of Raylan’s multi-jurisdictional interrogations, both Winona and Art point out that if one hasn’t done anything wrong, one needn’t fear attention from law-enforcement officers. (Now that they are free to watch this show, the West Memphis Three might dispute this assertion.) In this episode, it’s true that Raylan hasn’t done anything wrong (that is, until he keeps the planted gun), nor has Boyd, his dark double in Harlan. But it’s hard not to interpret this as foreshadowing for the remainder of the season.

MVP: Art! He retains his taciturn good humor even as Raylan (through no fault of his own, for a change) turns the office into a circus for a whole day. Also, the bit about Art’s assault on Bondas earlier this season reminds us that he and Raylan are really not so different. (Honorable mention goes to Gutterson, who sure has been sassy this season!)

Hat Content: Moderate. There is a nice moment as Raylan stomps out of an interrogation (to deal with the planted gun), defiantly donning his hat. The humbling is over; now it’s business time.

Raylan’s Love Interest Threat Level: Really Low. Not only is Winona reunited with Raylan in order to find out that one of her ex-husbands is accused of killing the other, but she has to dip back into her thieving skills to help Raylan beat the rap. Oh, and then she also learns that her dead ex had been involved in a plot to have her and her first ex killed, and that her first ex knew and kept it from her. It’s probably not going to turn out to have been the happiest day of her pregnancy. “This time, seriously, don’t come find me,” she tells him wearily as she heads out of town, and she sure seems to mean it.

State of Boyd Crowder’s Soul: Wrathful. Imprisoning Boyd on a false charge might seem like the right play for Napier in the short term, but we know this just means that Boyd has fewer distractions as he plots his furious vengeance.

Villain of the Week: Limehouse. “You said you liked to back the winning side,” says Quarles, as he shows up at Limehouse’s to propose an alliance. But the humiliated, unconnected Quarles hardly seems like a winner. They might be joining forces, but at this point Limehouse has come out ahead.

Best Line: The episode’s Best Line First Runner-Up is this exchange between Raylan and Art: “That is bullshit, and you know it.” “Is it?” “Is that a real question?” “Well, it had a question mark.” But this exchange ends with the episode’s real winner. As Raylan walks in on Duffy repainting the infamous room in Quarles’s vacated house:

Duffy: “Deputy, didn’t your mother teach you how to knock?”
Raylan: “Why, yes, she did. She also taught me how to shoot. Then my Uncle Sam, he gave me this [Marshal’s star] — and this is my knock.”

Okay, the Uncle Sam bit is kind of corny. But it winds up with an echo of Breaking Bad: Like Walter White, Raylan is the one who knocks.

Tara Ariano‘s next bullet will be coming at you a lot faster.