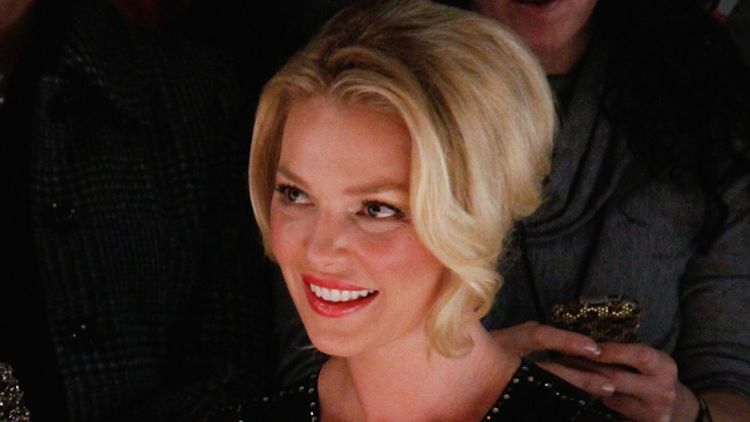 A Hollywood Reporter article yesterday took stock of the curious case of Katherine Heigl’s career, questioning whether Heigl’s bad reputation was rightly earned or blown out of proportion. The answer? Probably a little bit of both. Heigl is developing a new project about the CIA with Alexi Hawley, of Fox’s The Following, but some industry insiders question whether Heigl has burned too many bridges to make a successful comeback in television. It’s a fairly common story: struggling but consistently employed actor finally makes it big in TV with a hit show, and decides to gamble on a movie career. Heigl, who worked as a child model before starring in the unforgettable Gerard Depardieu incest comedy My Father the Hero, was best known for her work on the WB’s Roswell before finally becoming a bona fide TV star in 2005 with the rest of the Grey’s Anatomy cast. As Dr. Izzie Stevens on Grey’s, she was part of an ensemble of underrated but consistently working actors suddenly vaulted to the top of the casting list and trusted to sell magazine covers.

When Anne Hathaway dropped out of Knocked Up after realizing the climactic birthing scene would show the baby crowning out of a stunt vagina, Judd Apatow sought someone less squeamish who would be down for the joke. Heigl earned good reviews for Knocked Up, although most of the press centered on Seth Rogen’s sudden status as an ersatz romantic comedy leading man. Knocked Up was a huge hit, Heigl still had her role on Grey’s, and she now seemed poised to dominate the A-list as an everywoman star. Just one little problem: She kept complaining about the successful projects she’d been part of. In a Vanity Fair profile, she vented about Grey’s turning to ratings-grabbing stunts in its fourth season, which rankled creator Shonda Rhimes. Rhimes kept quiet about it until last year, when she told Oprah she was “not surprised” by Heigl’s lack of tact.

Heigl also dragged the Apatow production that had propelled her to potential movie star status, saying that Knocked Up “paints the women as shrews” but makes the irresponsible selfish male characters seem “lovable.” She wasn’t wrong, but it added to her reputation as an ungrateful employee who didn’t know how to keep her mouth shut in public about her issues behind the scenes. Heigl and Rogen’s characters were dropped from Knocked Up pseudo-sequel This Is 40, and Apatow and Rogen took Heigl to task on Howard Stern for choosing projects like the sexist and stupid The Ugly Truth. Apatow was still upset that Heigl had never apologized for airing her dirty laundry to Vanity Fair, and Rogen seemed baffled that Heigl thought the end product was imbalanced, since she’d improvised on set just as much as he had, giving her character plenty of opportunity to crack her own jokes.

Heigl left Grey’s in 2010 during the sixth season, by which point she was on the way to becoming a bankable romantic comedy heroine in movies like 27 Dresses and The Ugly Truth, which was a big hit despite rotten reviews. I’ve never seen The Ugly Truth, but I actually really enjoyed 27 Dresses, which benefited from the terrific chemistry between Heigl and her co-star love interest James Marsden. Heigl could have probably made a career out of floating by on generic rom-coms elevated by good casting. She is perfect at nailing the “alpha career woman whose love life is a mess” archetype that still perpetuates the bulk of female-focused films. So it’s not clear whether she overestimated her range, her fans, or just her good luck when she followed up The Ugly Truth with an Ashton Kutcher rom-com about assassins called Killers (11 percent on Rotten Tomatoes) and a movie called Life As We Know It (28 percent) that served a much less nuanced and, more importantly, much less funny take on Knocked Up‘s “men are babies and women have to take care of them!” trope.

Heigl joined the giant cast of Garry Marshall’s New Year’s Eve, then tried to build a franchise by adapting the bestselling Janet Evanovich detective novels for Heigl herself to star as bounty hunter Stephanie Plum, “a spunky combination of Nancy Drew and Dirty Harry” (2 percent; yikes). With that final nail in her box office coffin, Heigl asked to return to her plush Grey’s Anatomy gig, a request that was firmly denied. Was Heigl’s undoing a case of honesty not being the best policy when it comes to doing promotional press, good old-fashioned endemic Hollywood sexism, or just a classic case of hubris? The example that readily comes to mind is David Caruso, who left a critically acclaimed and high-paying gig at NYPD Blue to try establishing himself as a movie star leading man, before getting his ass served to him with flops like Jade. Caruso made his first attempt to return to TV with the one-and-done law drama Michael Hayes, ultimately ending up playing a campy lieutenant on CSI: Miami. Heigl might have looked to Caruso as a career cautionary tale, but nearly every actor believes in their soul that they are destined for superstardom, Heigl included.

Was it dumb of Heigl to abandon Grey’s Anatomy at the peak of its popularity to try her hand at movie stardom? Yes and no. Heigl’s complaints about Knocked Up might have rung more true had she not followed it up with increasingly lamer rom-coms. Assuming that Knocked Up gave her the power to dictate her career choices and make her own films, Heigl did not demonstrate very good taste in her follow-up projects. While she worked with the rom-com dream team of Kirsten Smith and Karen McCullah, who specialize in crafting comedic romances for actresses like Anna Faris and Reese Witherspoon, The Ugly Truth was not their finest effort and reinforced the idea that Heigl had been writing checks about her artistic integrity with her mouth that her ass ultimately could not cash.

Humbled, perhaps, by her string of poorly received star vehicles, Heigl is ready to return to TV, cloche in hand. The Hollywood Reporter piece questioned whether anyone would be ready to welcome her with open arms, or whether she was still seen as a volatile, disloyal starlet ready to throw even her most successful projects under the bus. Rumors about Heigl’s diva attitude date back to her time on Roswell, and most of the credit seems to go to Heigl’s momager, Nancy, known for complaining like a sailor about perceived slights to Heigl’s star status. Is Heigl just a child star who’s been sheltered into obliviousness by her mother all the way into adulthood, all the better for Nancy Heigl to keep milking her daughter’s career?

Or is Katherine Heigl just “straightforward” in an industry that expects women to shut up and look pretty for the camera essentially all the time? Is she looking for more credibility as an actor than she can really hack? A CIA project brings up the shadow of Homeland, but Katherine Heigl has never proven herself to be a serious actress on the level of Claire Danes. A prestige TV project, the new crown jewel on an actress’s IMDb page, might not be suited to Heigl’s strengths. But respectable, well-watched, and high-paid ensemble work, like Caruso’s on CSI: Miami, could be hampered by her reputation as a bad team player. How could Heigl best get back the goodwill she so famously squandered with one Vanity Fair cover story? I’m thinking a guest arc on a sitcom, with a few well-placed interviews about what a “good experience” it was for everyone. Maybe a multi-episode run on The Mindy Project as a romantic rival for Mindy Kaling’s Dr. Lahiri character. It would play to Heigl’s strengths as a rom-com actress, her years logged as a fake TV doctor, and even work as a wink to her overblown villainous reputation. If Heigl ever decides to fire her momager, she should call me up. I’ve got lots of good ideas!