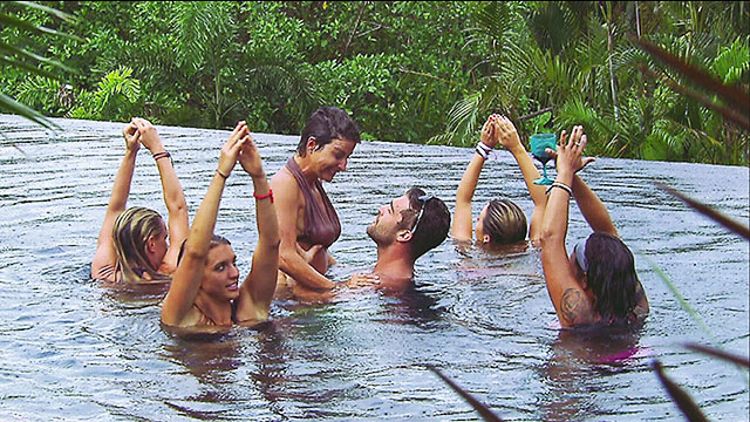 As summer stumbles out of the bar and fall saddles up, it brings with it chilly air, back-to-school bullshit, and some good ol’ lowbrow television programming that may or may not merit GRTFL tracking. GRTFL stalwart Survivor washes ashore Wednesday and will get the full treatment. I’m considering adding MTV’s new Coyote Ugly–meets–Honey Boo Boo–meets–depression day-drinking vehicle Big Tips Texas, but know I’ll regret it by Week 2. I may rekindle my relationship with Top Chef, but mainly for Padma reasons. I even looked at The Amazing Race cast because of a familiar face. And yet, I’m still not sure which shows to make dick jokes and puns about when the leaves turn. If you have any suggestions for shows I should add, please leave them in the comments.

In the meantime, thank God we have The Challenge. This week’s episode was all Diem, all the time. Let’s get right to it by turning our attention to this resilient, beautiful, inspirational, super-sweet cancer survivor and then making fun of her.

You see, once upon a time, Diem infamously dropped the “career first” line on CT, and ever since CT has somehow maintained the romantic upper hand. This season, even while making advances of some sort or another toward seemingly every single female cast member (and for all we know, some production staff), Softie Silverback has still found Diem there waiting to accept a smooch. This week, the authenticity of their romance came into question, with some in the house accusing CT of using Diem for political power. The whole ordeal transformed Diem from a confident, happy, stable human into a screaming (5 + 5 points), crying (5 points), hot mess in a wedding dress.

The only proper way to reflect on this metamorphosis is to chronologically track its progress throughout the episode quote by quote and look by look. Here goes:

Scenario 1: Diem is having a soak in the pool with Aneesa. Glowing.

Quote: “The fact that he [CT] is in the final and he still tried to, like, woo me, it made me feel good.”

Translation: “See, he is already in the final and he still wants to get in my pants, that proves this is love, right?”

Scenario 2: Bananas is offering advice about Diem’s relationship with CT.

Quote: “Please tell me that you aren’t foolish enough to think that anything is going to transpire after the show is over.”

Translation: No need, this one is pretty much all right there.

Diem’s Mental State: Wavering, but still stable. She can still operate heavy machinery and speak in sentences and does not need medical attention.

Translation: “I am going to make this sound like a compliment but that is just the peanut butter around the ‘he isn’t into you, bitch, and you are the only one who doesn’t see it’ pill.”

Diem’s Mental State: She knows what she senses, and she senses that things are real with CT. She also still has full command of her emotions.

Quote: “I trust CT, especially in this type of game. I don’t think he would screw me over.”

Translation: “I don’t trust CT, especially in this type of game. He would totally screw me over. Totally.”

Scenario 6: Diem hears CT hinting at going against her wishes.

Translation: “Why would he put those girls in the jungle? Why would he go against me? Why does Aneesa’s face look so scary right now?”

Diem’s Mental State: Paranoid, fractured, and unstable, but not quite Courtney Love–ish.

Scenario 7: Upon returning to the house to campaign to get Camila and Jemmye voted into the jungle, Diem puts on a wedding dress. Bananas notices.

Translation: “Do we have enough drinking water, batteries, and canned goods around? This may not end well.”

Quote: “He’s the one that has been with you the whole time, Diem, and he has been kissing you. When was the last time that he kissed you? Do you remember? It was before the last guys’ vote, and he hasn’t since. If he doesn’t step up and defend you, it will show how much of a scumbag he is.”

Translation: “When he votes for Paula and Emily to go in the jungle against you, you will finally see what we all do: that he doesn’t give a fuck about you. Doi.”

Scenario 9: Camila is explaining that Diem is having an emotional response, not a rational one.

Quote: “I AM AN EMOTIONAL PERSON.”

Translation: “I have strong feelings and they aren’t always piloted by reason. For example, right now I feel a strong urge to punch you, eat mac and cheese, learn to speak Swahili, and do the humpty dance. See what I mean?”

Scenario 10: Jemmye is going in on Diem and says what everyone is thinking.

Quote: “You look so dumb. You know how dumb you are going to look when it comes to CT? He’s [bleeping] everybody and you are still chasing him.”

Translation: “You know that all of this is on tape and they are making a television show with the footage, right? OK, good, because the way that you are letting CT play you, I wasn’t sure.”

Quote: “I am hurt. And hearing some girl named Jemmye that I don’t care about talk about ‘Do you know how stupid you look?’ It hurts on a very deep level.”

Translation: “‘Jemmye’ is a stupid name.”

Quote: “I see Diem with her glass of wine and she is strolling around the house and she looks like she is out of her mind.”

Translation: “She is drunk. She is crazy. She is wearing a weird wedding dress. Everyone proceed with extreme caution.”

Diem’s Mental State: She might be foaming at the mouth. Random synapses are firing incomplete passes around Diem’s brain like Geno Smith on Thursday Night Football.

Scenario 13: CT reveals his true feelings about his relationship with Diem.

Quote: “I am over this whole being-cute-with-the-ex-girlfriend thing. To me it’s a game, I am playing a game, and for her to try to make it emotional and act like I owe her something, nah.”

Translation: “Going on this stupid show is my career. Career first.”

Diem’s Mental State: Someone please take the kitchen knife out of her hand and the shoelaces out of her shoes. Is that a voodoo doll she’s making?

Then MTV did that thing it does by not showing who wins the jungle so that we come to next week’s episode not knowing if we’re going to get another chapter in the metamorphosis. But even if Diem loses, it would mean Camila returning, so at least there still will be one woman remaining who has the potential to snap and turn the finale into some weird Blair Witch–esque lost-footage horror show. Fingers crossed.

Cooke got yelled at by Diem/Courtney Love (5 points) and TJ dropped a “You guys absolutely killed this challenge” on Cara and Cooke. They reacted appropriately (25 points):

The challenge they won consisted of running down the beach and remembering a sequence of colors. For some reason, they were all outfitted with those stupid water bottle backpack things:

This choice is the GRTFL Questionable Moment of the Week:

If marathon runners can go 26.2 miles without these things, why does Jemmye need one to walk down the beach? Do you think camels are offended that we call these things CamelBaks? Doesn’t the water taste all plasticy? Could anyone look cool drinking from one of these? Doesn’t Jemmye kind of look like a fish with a reverse scuba-diving device? Aren’t these things doing more harm than good? Wouldn’t you rather not wear the heavy, water-filled backpack while running and instead get a drink when you’re finished? Do real people own these things? Is Jemmye’s filled with Crown Royal? Oh, now I get it: Jemmye is like Bane, and without consistent Crown Royal dosage, she will wilt and die. Sorry about all the questions, now this makes total sense. Carry on.

3. “I think I suck at memorizing. I don’t remember the night before. How the hell am I going to remember some random color combination?”

2. “No matter what, people will not be friends after this. You can see the tsunami coming; it is like I am literally watching the wave. Friendships will be broken, and I can see it happening.”

1.“I really think that we need to trust the course of diplomacy regarding this Syria situation and not rush to action.”

OK, fine, I made up that last one. “GRTFL Top Four” just doesn’t have the same ring to it.

Check out what happened when Diem was done arguing with Camila and Jemmye (5 points) and turned her attention to CT:

THE CAST WAS POINTING AT THE CAMERAMAN, RUSHING HIM OVER TO FILM THE ARGUMENT! Naked-ass Miley Cyrus and her wrecking ball just destroyed the fourth wall on The Challenge. This proves that the cast interacts with production. I’d bet my life that right now, there’s a female audio tech carrying CT’s child. OK, fine, I would only bet, like, five bucks, but still.

Don’t forget to suggest some shows in the comments, watch Survivor next week, and enjoy the shit out of your weekend. Until then. No New Friends: The Return of Arsenio Hall