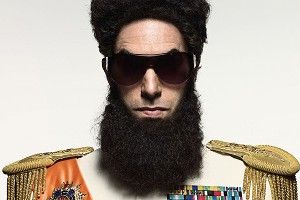 Oscars drama! Deadline is reporting that Sacha Baron Cohen — who co-stars in Hugo, which is up for Best Picture — had his tickets to this Sunday’s Academy Awards pulled. Apparently, the Academy learned Cohen was planning on arriving on the red carpet in costume as his character from his upcoming Middle Eastern autocrat satire The Dictator, and got peeved. Later in the day, facing blowback from their stodgy ways, they publicly reversed course, saying Baron Cohen was not banned from the ceremony, but that they were holding out on hooking up the tix until they got assurances he would not get dressed up for the event. As an Oscars spokesperson told Deadline, “We would hope that every studio knows that this is a bad idea. The Red Carpet is not about stunting.” (Side note: Who is this slang-literate Oscars spokesperson? Young Buck?)

So, why so picky, Academy? Aren’t the Oscars all about celebrating the magic of moviemaking? Why can’t Baron Cohen use the opportunity to celebrate his own personal brand of moviemaking magic? This can’t be about the move being too self-promotional — every single thing about the Oscars is self-promotional. Academy, are you maybe worried that if you let this happen everyone is going to come with T-shirts with their own faces on them next year? That seems like a pretty unrealistic concern.

Here’s a hunch: This all goes back to the last time Baron Cohen pulled off a trick like this. As you may recall, that was Baron Cohen as Bruno, at the 2009 VMAs — and he took that opportunity to base-jump his bare rear end into Eminem’s face, a divisively explosive moment. Later, it would turn out that Em was in on it. And if such a hip-hop luminary is willing to get butt-faced, isn’t it possible Baron Cohen has roped in a new butt-face victim? So whose face is the Academy particularly worried that Baron Cohen will put his butt in? Meryl Streep? Max von Sydow? Uggie?! Be honest, Academy.