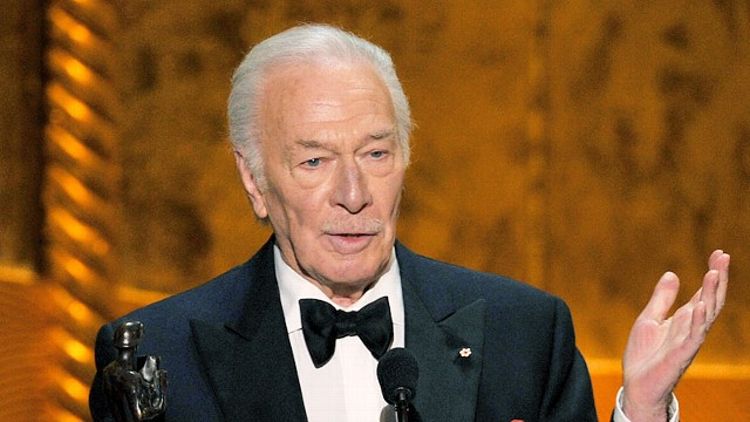 We’re almost there! Three days until the winners are revealed, after which in no time flat the 2011-12 Oscar season will become an ancient, bitter memory and we can nurse our collective grudges and figure out how everything could have gone so wrong. Or, better still, scratch our heads in delighted surprise. Here’s hoping.

When the envelope for this category is opened and the name of the winner is read, it will almost certainly be a moment for the record books as the Academy celebrates the oldest performer ever to win a competitive Oscar. The only question is which of the two 82-year-old nominees the audience will be applauding. Actually, it’s not much of a question at all: Christopher Plummer has amassed so many preliminary awards for his performance in Beginners that all Branagh, Hill, and Nolte have to worry about is practicing their frozen smiles. Back in September, I wrote that his role felt “laboratory-designed for awards: Getting to play a stoic gay man who doesn’t come out until he’s 75 is a little like bowling a strike after getting spotted nine pins, which makes the fact that Plummer’s portrayal is so understated and simple the true mark of his talent.” The biggest surprise of the race may be how fireproof he’s been as the favorite since then; the rise and fall of Drive’s Albert Brooks served as a valuable reminder of the often immense disconnect between Internet- and/or critic-fueled enthusiasm and Academy passion.

The wild card here is von Sydow, whose nomination was relatively unexpected and who is, in some ways, a bigger threat than Brooks might have been: He’s 247 days older than Plummer, he’s in a Best Picture nominee, his performance contains the kind of gimmick voters love, and, come on, he’s Max von Sydow, the man who played chess with Death! In any other year, the statuette would probably be his. He’s going to get a lot of votes. But probably not quite as many as Plummer.

I could attempt to drum up suspense here by reminding you that this is the category in which underdog Juliette Binoche beat favorite Lauren Bacall (Binoche is French and her movie, The English Patient, won Best Picture, so that would be good news for Berenice Bejo). Or I could bring up the time Marisa Tomei was the surprise winner (Tomei was in a comedy, My Cousin Vinny, so that would be good news for my dark horse, Melissa McCarthy). Or I could ask you to bear in mind that there’s a long history of using Best Supporting Actress as an arrival award to honor a young performer who’s exceeded all expectations (Meryl Streep, Angelina Jolie, Jennifer Connelly … Jessica Chastain?). Or I could highlight the fact that only three of the last seven winners have been American, which might help Janet McTeer.

But here’s another longstanding Best Supporting Actress tradition: The favorite wins. Octavia Spencer’s hold on the front-runner spot has been almost as unbreakable as Plummer’s — and if there were any doubters, a final round of publicity done hand-in-hand with her Help costar Viola Davis probably sealed the deal.

Now that it’s been confirmed to us that the Academy is overwhelmingly white, male, and over 50, it’s easy — perhaps too easy — to view that segment of the membership as a monolith. For instance, in this category, a few years ago, Oscar voters were bound to choose Up in the Air, right? It was about middle management and downsizing and airport bars and office cubicles — classic white-guy stuff! Wrong: The voters went for Precious. Why? Because they thought it was a better script.

So, lesson learned — demographic analysis is not an excuse to create cultural stereotypes. That said, this year, the inner struggle of the middle-aged white man is getting a lot of play, and all voters really have to do is choose a flavor: Clooney or Pitt. Best Adapted Screenplay is down to The Descendants and Moneyball (Hugo isn’t seen as a writer’s movie, and since it’s been a dozen years since a film won this award without a Best Picture nomination, Ides and Tinker are also-rans).

It’s a close one. Both films are up for Best Picture (Moneyball has six nominations, The Descendants has five). Their box-office performances have been roughly equal (The Descendants just passed Moneyball’s $75 million U.S. gross on Monday). Moneyball’s script beat The Descendants with groups like the Broadcast Film Critics Association and the New York Film Critics Circle (but critics don’t vote in the Oscars). The Descendants’ script beat Moneyball for the USC Scripter Award and the Writers Guild of America award over the weekend (but writers, who decide those prizes, represent only 7 percent of the Academy’s membership).

Let me make a confession: I wrote the last three paragraphs having no idea which movie I was going to predict. My head says Moneyball is the better script and that voters will want to give it something. But The Descendants has had the most impressive post-nomination box-office surge of any major contender. Coin toss goes to The Descendants.

The Artist
Bridesmaids
Margin Call
Midnight in Paris
A Separation

I’d love to make the case that Asghar Farhadi’s great script for A Separation could sneak in and take the prize, but Pedro Almodovar’s Talk to Her remains the only foreign-language film in the last 45 years to take this category, and even that was in an odd year. It’s possible that there are enough Academy voters who are not Francophile nostalgists to allow an upset. But assuming that doesn’t happen, it’s between The Artist and Midnight in Paris, which tug at voter sentiment in different ways. The allure of seeing Woody Allen, in the twilight of his career, win one more Oscar is considerable — but, as every Academy voter knows, he never shows up, and it’s not much fun giving a prize to someone who can’t be bothered to collect it. As for The Artist, even its most ardent supporters concede that a silent movie is a long shot for a writing award — but there is a certain segment of the Academy that loves the movie so much it’s going to vote the straight ticket, including screenplay. Bottom line: Barring a complete Artist sweep, Midnight in Paris takes it.

Wait, David Foster Wallace Didn't Like AC/DC? This Changes Everything