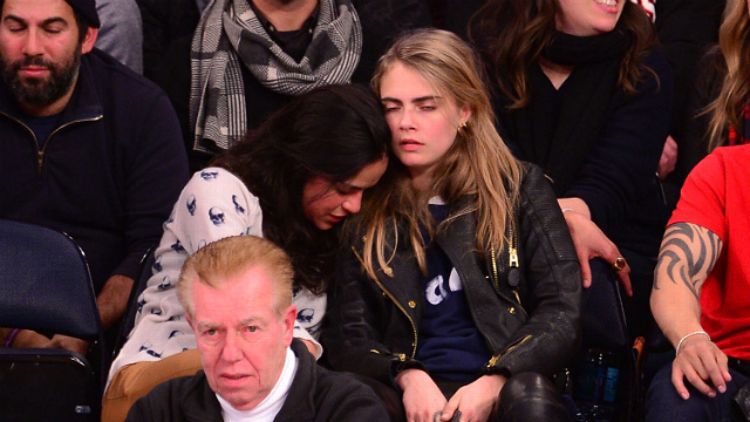 Every year, thousands of models are cast in runway shows and ad campaigns, but only a few go on to become bankable brands that can turn a profit. Since the decline of the ’90s supermodel empire, the chances of becoming a breakout name in the modeling business are even more slender. As celebrities have replaced models on the covers of fashion magazines, models have had to become more like actresses to gain a following. A mere punim isn’t enough; you need a personality to go with it. Cara Delevingne is a beautiful girl, but she likes to pull zany faces during photo shoots that make her look simultaneously ugly and incredibly cute. Some people find this charming, while others think it’s déclassé (the Jennifer Lawrence effect). But among those who have been charmed by Cara are some of pop’s biggest stars and fashion’s hottest designers, and maybe a few directors. Like her or not, there is no avoiding Cara D. Relentlessly promoted by magazines like British Vogue and i-D, she is fast eclipsing model status and becoming more of a general all-around star. Here are some fast facts about Cara.

1. She’s the sometimes BFF of Rihanna and Miley.

Cara has become an accent piece for celebrities looking to stay out super late in urban hot spots around the world. She got stoned with Miley in Amsterdam, got an ass slap from Taylor Swift on the Victoria’s Secret runway, and accompanied Rihanna to a Nets game this week, where Cara got drunk and made out with Michelle Rodriguez. She’s definitely dated Harry Styles and singer-songwriter Jake Bugg, but there was also a persistent rumor that her close friendship with Rita Ora was actually a romantic relationship. Even Cara haters will occasionally admit she looks fun to party with. Even Cara lovers admit partying with her looks like it would be eventually exhausting.

2. She has a wild-child reputation.

The recently minted 21-year-old like to gets drunk in public. She goes out to clubs all night. She accidentally drops mysterious plastic baggies of white powder on her front porch after being out till dawn. She’s at the center of the new hard-partying Primrose Hill set, who’ve been called “the Instagram gang,” which includes other hot British models like Daisy Lowe, Jourdan Dunn, and Georgia May Jagger. She and Miley like to take selfies where they are touching tongues. She has bonded with proto-Cara and ultimate British wild-child model Kate Moss over celebrity and self-perceived physical imperfections. I’m not saying she has all the good drugs, I’m just saying she probably knows where to get them. Also, drugs are bad.

What boobs are to Kate Upton, eyebrows are to Cara Delevingne. Cara’s strong eyebrows are her trademark. Full and dark, they’ve been compared to Brooke Shields’s eyebrows and iconic ’80s look. While Cara photographs extremely well, she can also look really goofy, which makes her more endearing and a little less intimidating. This is not a model from the Kate Moss and Naomi Campbell school of sphinxlike ice queenery. Cara seems friendly, and even her fierce runway walk is a bit silly. But what runway walk isn’t a little bit silly? Modeling is all a bit silly.

A self-proclaimed tomboy, Cara prefers to spend her downtime in streetwear. Her off-the-clock style involves a lot of sweatpants and fitted hats, which have garnered her a following among fashion bloggers and Tumblr kids. She usually looks extremely comfy, or at least that’s what I usually think when I see her candid photos. But she also glams up nicely and can do a convincing high-fashion sneer, earning her a spot on this year’s Victoria’s Secret runway. Cara seems more comfortable looking cool than flat-out sexy, but she acquitted herself well enough in the fashion show, jutting her hips in a satin soccer onesie.

5. She really wants to act.

Don’t pretend you didn’t see this one coming! At this point, Cara is already more of a media personality than a model. She’s more than just an anonymous clothes hanger for designers. She’s a face. She toplined Chanel’s resort collection, has walked for designers like Jason Wu, and stars in a tea party with animals for Mulberry’s spring campaign. But she’s already thinking past modeling toward acting. So far she only has three credits: the young socialite Princess Sorokina in Joe Wright’s Anna Karenina; a hard-partying rich young Brit in the upcoming Kids in Love; and a student in Michael Winterbottom’s fictionalized version of the Amanda Knox story, called The Face of an Angel. Not too shabby! Most important, though, she’s the voice of the DJ on the Non Stop Pop station in Grand Theft Auto V. Who else could turn modeling into voice work?

Runaway Hits: The Diametrically Opposed Pleasures of 'Frozen' and 'Paranormal Activity: The Marked Ones'