In Defense of Kate Upton 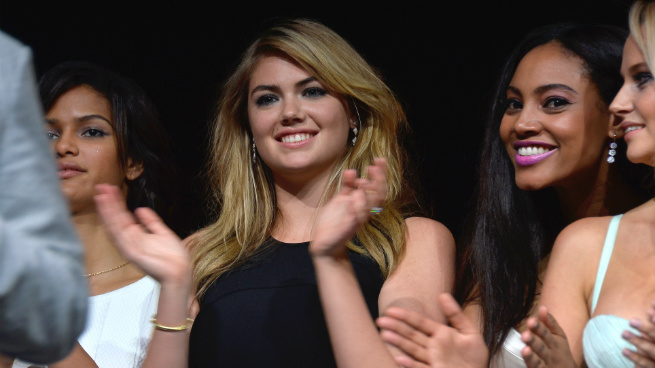 What is it about Kate Upton that makes people so crazy? The obvious answer is her amazing boobs, but there’s also a weird tone to the way she sometimes gets discussed. Page Six recently suggested that the model trio of Nina Agdal, Lily Aldridge, and Chrissy Teigen, who landed the Sports Illustrated swimsuit edition cover for 2014, felt that the mag undermined them by putting a solo shot of Upton on the back of the issue as an alternate cover. Since Upton was the SI cover girl in 2012 and 2013, there have been some rumors that the other models resent her for monopolizing the spotlight.

In her spread in this year’s issue, Upton tops last year’s Arctic pinups by floating around in zero-G, and the shoot has been hyped more than any other aspect of the 2014 swimsuit issue, including the cover and the spread of breakout “Blurred Lines” video/future Gone Girl star Emily Ratajkowski in a painted-on guitar pick bikini. On the one hand, it’s easy to see why: Upton’s amazing boobs, without gravity! But when Upton didn’t show up to the New York party for the swimsuit issue, a gossip magazine narrative began to form, painting Upton as a diva who stayed home because she was upset she hadn’t been chosen to three-peat the front cover, and the other cover models as angry because they were already competing with each other for attention, and “weren’t expecting to compete for attention with another girl on the back cover.” Upton’s reps insisted she was merely sick, and she showed up as scheduled for the next promotional SI swimsuit issue event in Miami, posing gamely with the other models to quash the rumors that they have beef. 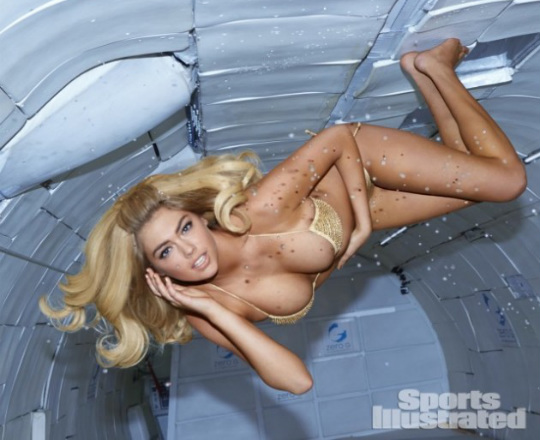 But Page Six’s sources also pointed out that even without the cover, Upton “might still steal the show.” While Upton may not yet have scored the SI covers hat trick that only Christie Brinkley (’79-’81), Elle Macpherson (’86-’88), and Cheryl Tiegs (’70, ’75, ’83) have achieved thus far, she may as well have. The Upton flip-cover is branded with “50th Anniversary” and a photo of Upton in a pink bikini next to the line “FIVE DECADES OF SEXY” (which might unintentionally convey the message that Upton is 50, in which case, she looks especially great). Even the front cover — in which Agdal, Aldridge, and Teigen stand with their backs to the camera, torqued around awkwardly to look over their shoulders and touch each other’s butts — is interrupted by a tiny image of Upton in the corner, beckoning the reader to flip over the mag.

Carol Alt, who had the cover spot in 1982, semi-shaded Upton to HuffPostLive last week, saying, “I don’t get what all the hullabaloo is [about Upton]. I think what it is, is that in this moment there’s just so much social media and that’s why she’s had more word of mouth than anybody.” She qualified that statement immediately with: “I like Kate. She’s a pretty girl. But all the girls are nice and all the girls are pretty. And every cover, to me, deserves to be talked about.”

The 21-year-old Upton is definitely something of a social media phenomenon, riding a Terry Richardson video of herself doing the Cat Daddy to viral fame. After modeling for several mall brands, including Guess, she was featured in the 2011 Sports Illustrated swimsuit issue as “Rookie of the Year” for a body paint photo. SI has a lot invested in the Upton industry. A model’s career usually tops out around 30 and can start as young as 13, but in Upton’s case her career didn’t really begin until she turned 18, at which point it became legal to talk about her great boobs.

The SI swimsuit cover is obviously not really about modeling, or selling swimsuits, or, you know, sports. It’s about sex, and crafting sex symbols to sell magazines. Normally, models are divided into different categories: high fashion, commercial, and glamour. High fashion is the domain of ultra-skinny Vogue models. Commercial refers to modeling for catalogues, and usually requires a wholesome, healthy-looking image. Glamour is a euphemism for soft-core photography, the realm of men’s magazines. All three often involve some degree of nudity, but high fashion near nudity and commercial near nudity (like the kind in lingerie catalogues) are viewed as either artistic or only mildly titillating. Since glamour modeling’s main intent is to arouse, it is seen as being much closer to pornography, and as such has a more tawdry association than the other two kinds of modeling. Glamour is a vast category, and there’s still a perceived difference between doing a magazine like the Sports Illustrated swimsuit issue (an honor) and Maxim (vulgar), even though both of them essentially involve the same thing: posing in your underwear.

While the magazine shows no particular preference for blondes over brunettes as cover stars (although, whither the gingers?), the vast majority of the SI cover models have been white, with the occasional Latina. Teigen is half-Thai, making this year’s issue the first to feature an Asian model on the cover. The magazine featured an Indian model in an interior photo shoot for the first time in 2010. Tyra Banks is still the most famous non-white cover girl, becoming the first black model to do the cover in 1996 alongside Valeria Mazza, and again in 1997 by herself. The magazine didn’t use another black model until 10 years later in 2007, and that model was named Beyoncé Knowles. Beyoncé’s cover marked the first and only time a non-model got the coveted spot. Some SI models used getting the cover as an opportunity to build themselves a brand, although to judge by Christie Brinkley’s recent People cover story, in which she describes how she stays so terrifyingly hot at age 60, being a sex symbol who ages in public is a double-edged sword.

Upton’s success brings up many of the same issues that Anna Nicole Smith’s did. Both buxom blondes have been tagged as being somehow low-class, although Kate’s posh upbringing was extremely different from dirt-poor Anna Nicole’s. When people criticize Upton, they describe her face as average, compare her to ASU coeds, or complain that she doesn’t have a small enough waist for a true hourglass figure. What people like Carol Alt don’t seem to understand is that Upton’s spectacular girl-next-door quality is the key to her appeal. She’s the average fantasy object of the American man. It’s very vanilla, but everybody still likes vanilla! It is quite possible that in the decades since the reigns of Marilyn Monroe, Jayne Mansfield, and Brigitte Bardot, the barometer for what is sexy hasn’t really moved that far beyond white blonde women with big boobs.

But if a model is very attractive to straight men, isn’t she also kind of threatening to straight women? Not necessarily. While some people seem to be extremely put off by Upton’s success, others see her as harmless. Maybe it’s because her public image is so bubbly and friendly. She doesn’t seem like a diva, or the type to hit on other people’s boyfriends, not that every man in sight wouldn’t be dying to talk to her. The goofiness helps disarm how terrifyingly hot she is. She’s the Jennifer Lawrence of models. 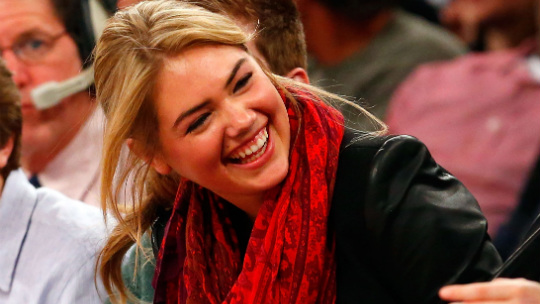 And like Lawrence, she can be quite candid. She told Elle last year that the experience of being on the SI cover was not validating, but horrifying: “I felt terrible about myself for a solid month. Every single guy I met was either married or about to be married, and I felt like I was their bachelor present or something. I’m not a toy, I’m a human. I’m not here to be used. I am a grown woman, and you need to figure your shit out.” It was refreshing for Upton to be so up-front about the downsides of being sexualized, and to defy expectations that she was nothing but a Barbie who would always be stoked to pander to her supposed demographic just because she had posed on the cover of a magazine in a bikini.

Upton’s brand is the biggest the modeling world has seen in years, and she’s even enjoyed some crossover success, walking in Marc Jacobs’s Louis Vuitton show last fall. If there’s one thing that is especially threatening about her to other models, it’s the way she gets to move between high fashion, commercial, and glamour in a way that prior generations of models weren’t allowed to. Her success is even more remarkable given the availability of technology and the rise of the “Instagram model.” With porn and sexy half-naked pictures of amateurs easily available everywhere at the click of a button, who is going to go out and buy a magazine just to look at glossy photos of a hot girl floating in zero-G? A lot of people, apparently. The swimsuit edition is always Sports Illustrated’s best-selling issue of the year, which is why it has persisted and thrived since debuting in 1964 despite eventual enduring protests of its inherent sexism and the general decline of supermodel culture since it arose in the ’70s and peaked in the ’90s. Kate Upton is single-handedly saving print.

'Frozen' just became the first film directed by a woman to pass $1 billion at the box office.