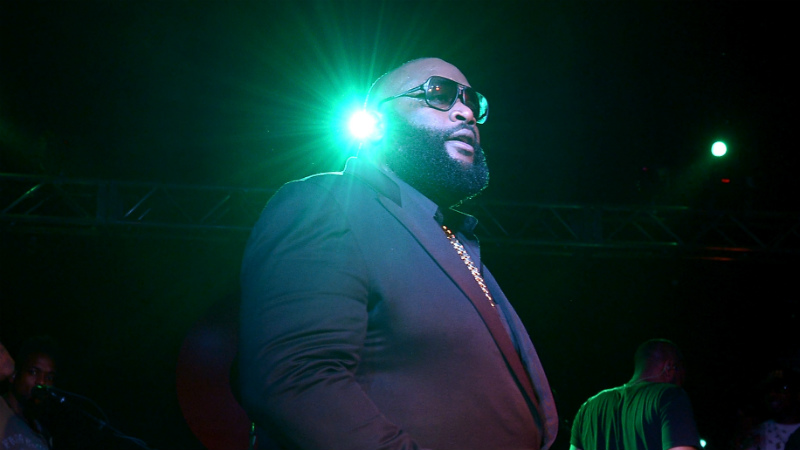 If you don’t believe what you’re hearing on a Rick Ross album, you know how to enjoy the man’s work. This does not entail “suspension of disbelief” — that would mean an ongoing process requiring constant effort on your part. With Ross, you discard belief entirely, something akin to pushing a boulder toward a hill sloping downward: It requires an initial burst of energy and then the forces of nature take care of the rest. You don’t believe he knows the real Noriega. You don’t believe he watched the video for “Speedin’” and thought for a split second there were some — how do we put this? — discrepancies in continuity. You don’t believe any millionaire could be that proud of owning a Wingstop. On Rozay’s sixth studio LP, Mastermind, he is still boasting about his unimaginable wealth and facility with firearms, and I am still in utter disbelief. The problem is I can’t believe what I’m hearing.

And it’s that Rick Ross is boring the hell out of me.

Let me be perfectly clear: Ross says a lot of things that are clearly bullshit throughout Mastermind’s seemingly five-hour runtime. Most egregiously, he says, “Wale a genius.” But otherwise, Mastermind is a compendium of true lies, or at least what Drake was referring to when he said, “You know it’s real when you are who you think you are.” And the best Rick Ross songs are the ones where he tells us who he thinks he is, not the ones where he shows us.

To backtrack, the story of how Ross got to this point is worth reiterating in short. On Port of Miami and Trilla, he sold a lot of records while still being the kind of guy you laughed at. Hearing him huff and puff over bombastically explosive and expensive tracks like “Push It” and “Hustlin’,” he was the fat, rich kid in gym class who compensated for an utter lack of motor skills with $200 basketball shoes. By all means, his career should’ve been over once The Smoking Gun “outed” him as a former corrections officer, much to the glee of 50 Cent. Mind you, this was a time when 50 Cent had the juice to make a fool out of popular rappers other than himself. 50 Cent’s bet was a wise one, trusting the stability of a credibility-based economy; after all, his life experience was inextricable from his wildly successful career, and his narrative was so potent that it even served as the basis for a Sopranos subplot. His street cred was literally worth millions and Ross was playing with counterfeit bills.

And then came 2009’s Deeper Than Rap, wherein Ross made a brilliant, Disneyesque maneuver — he created Planet Boss, an alternate universe where his funny money was the only recognizable currency. And during a time for dwindling commercial fortunes in hip-hop, it seemed like everyone except 50 Cent had been dying to visit Planet Boss. A year later, Teflon Don confirmed it on “MC Hammer” and “(B.M.F.) Blowin’ Money Fast,” which made the appeal of Planet Boss even more clear. You don’t have to believe a word he was saying, just that he thinks it’s true.  The great part is that when you yell “I THINK I’M BIG MEECH, LARRY HOOVER” in your Civic, you have as much claim to it as Ross does.

Breaking kayfabe, destroying the fourth wall, whatever you want to call it — Deeper Than Rap exaggerated every falsehood in Ross’s story and allowed hip-hop to do likewise, a huge uggh of relief at being able to say, “None of this shit is real.” But immediately after Rich Forever, Ross became too good at being fake. After two wildly successful compilations from his Maybach Music Group crew, Ross released the proper follow-up to Teflon Don in 2012, the Grammy-nominated (really!) God Forgives, I Don’t. On it, record exec L.A. Reid was telling us about Ross’s particular genius, which mostly reminded me that Pras got Donald Trump to do a skit on his solo album. Diddy wouldn’t shut up about him either. And chances are, most publications were doing the same and who could blame them? What was once a thrill similar to smoking in the woods during high school — somehow both contraband and going on fully in the open — God Forgives, I Don’t was your dad finding your stash and trying to tell you he was down for a little puff-puff-pass too.

And that continues on Mastermind, which says the same things you heard on Teflon Don while leaving nothing to the imagination — an automated bank teller informs us exactly what Rick Ross is worth. He boasts “all my shit went gold,” which is pretty impressive for a rapper whose career began in 2006. But … there’s a level above gold, we all know that. The worst fake newscaster I’ve heard on a rap album in five years tells us a drug bust has cost Miami’s drug cartels “millions of dollars,” making it sound about as intriguing as the latest Hot Pockets recall. Instead of making a ludicrous boast about being the new Biggie, Ross raps over the instrumental from “You’re Nobody (Til Somebody Kills You)” and does a better job emulating Frank White than Shyne, Guerrilla Black, or Jamal Woolard. Even when he rhymes Casino with Janet Reno for no reason.

Moreover, the reality of Rozay as “bankable hip-hop star” sets in, and it’s in the most mundane way possible. Take “The Devil Is a Lie,” the latest collaboration between Ross and original benefactor Jay Z. On Teflon Don’s “Free Mason,” Ross mused about pyramids and ancient hieroglyphs and compared himself to Solomon’s Seal, whereas Jay Z felt comfortable enough on Planet Boss to be a nominal sports franchise owner while refuting his ties to the Illuminati. These are the sort of pressing concerns one handles on a Rick Ross album. Meanwhile, “The Devil Is a Lie” is pretty much an update on God Forgives’ turgid “event track,” “3 Kings,” a C-level “Go Crazy.” Hey, speaking of “Go Crazy,” former rival Jeezy shows up on “War Ready” and has to remind you that they were once rivals to begin with. God forgives, and I guess Rozay does too? “War Ready” is the point that often occurs on bloated hip-hop blockbusters, Song 8 or so out of 19, the midway point where it feels like it’s never going to end. Your reward for getting to Track 13 is a reminder that the Weeknd still exists.

It goes on. Kanye West and Ross last hooked up in 2010 and it was a symbiotic relationship: Kanye was still smarting after a tough couple of years, and the pre-My Beautiful Twisted Fantasy GOOD Friday rollout hadn’t begun yet. On “Live Fast, Die Young,” Kanye showed he could still be that charming jackass with the College Dropout dropout. That led to Fantasy’s “Devil in a New Dress,” and gave you just enough of a peek for a chill-inducing admission from a guy who used to be down with Def Squad and “had ciphers with Yeezy before his mouth wired.” So here we have “Sanctified,” where Kanye’s flow is more legitimately grating than anything on Yeezus, and great, he brought Big Sean along with him. And rather than implying what it meant to have ciphers with an unknown Kanye, in addition to “Nobody,” Ross further plays “I Love the ’90s,” interpolating Ol’ Dirty Bastard’s “Shame on a N—-” and Camp Lo’s “Luchini.” I mean, those are great songs, but Ross was a relief from the ’90s fetishism.

But really, what you hear on Mastermind  is too many people laughing with Ross. And the previous sense of imbalance, of danger, of “Wait, this is Rick Ross?” recognition that you geek out over on Gchat is completely gone. Mastermind is too big to fail, whereas the Ross from 2009 to Rich Forever didn’t even know failure was an option. There isn’t even anything worth yelling on here. Whether or not truth is stranger than fiction for Rick Ross, it’s a hell of a lot less fun.

In Defense of Kate Upton

Freak Show & Tell: Jon Gosselin May Have Some Anger Issues