Freak Show & Tell: Jon Gosselin May Have Some Anger Issues 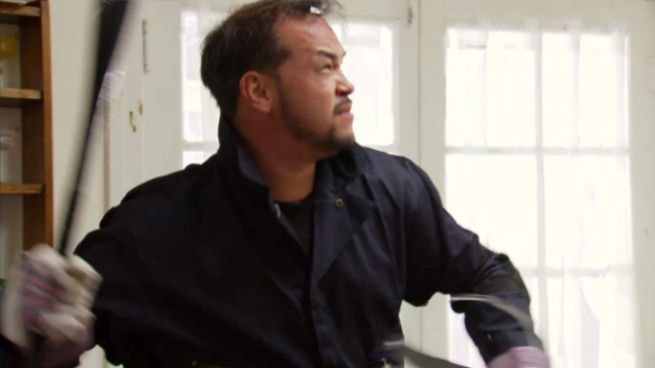 Why Are We Watching Him? He’s working on his relationship with his girlfriend, Liz Janetta.

How Did He Get Here? Jon became a celebrity of sorts when America watched his marriage collapse on Jon & Kate Plus 8. Now he’s trying not to repeat the same patterns with Liz that he was locked in with Kate, his ex-wife.

What’s the Grossest Thing We See? Invited to smash up a room as part of an anger exercise, Jon goes so crazy over the top that even his fellow therapy patients — who’ve just finished doing a reasonable version of the same thing — are taken aback.

What Have We Learned? Jon may need more help than the format of this TV show can provide.

Why Are We Watching Him? He’s getting ready to undertake a serious cleanup on his hoarded apartment.

How Did He Get Here? Mike is scheduled to have a rare spinal surgery soon, but because of the risk of infection, he can’t return to the apartment in its current state.

What’s the Grossest Thing We See? Mike explains that he turned off the water in his bathroom, which is hoarded with several vertical feet of undifferentiated debris, in case of leaks, so now when he can’t go outside to relieve himself, he urinates into bottles (which we see), though as for how he manages any other waste evacuation, he remains decorously silent. Then his sisters show up and start pressing him on whether the cups and bottles they see are full of iced tea or apple juice (they aren’t). The next logical question? “That brown stuff. Is it mud? Or is it something else?” Mike’s failure to answer is kind of an answer. The camera doesn’t cut to any brown stuff in this moment, but when we eventually get down to the nitty-gritty (as it were) of the cleanup and see anything with any brown substance smeared on it … we know.

Why Are We Watching Him? He’s getting ready to have sex with a lady who’s engaged his services.

How Did He Get Here? Nick is a male prostitute in Las Vegas, where it’s legal.

What’s the Grossest Thing We See? Jill, the client, browsed through the prostitutes on offer at Nick’s agency and couldn’t settle on one, so she chose four, who are going to take turns having sex with her. (Jill and her husband are in an open marriage, and he knows what she’s going to do, but the daughters she refers to maybe don’t?) Anyway, the guys draw straws to see the order they’re going to take. No one wants to go last, but since someone has to, Nick proposes that they make a gentlemen’s agreement: No “nutting” in Jill. I’ll quote Nick: “I’m not walking into a jizzaster area.”

What Have We Learned? You might not think so when you first meet them, but these professional prostitutes are pure class.

The Moment Podcast: Brian Koppelman With the Hold Steady