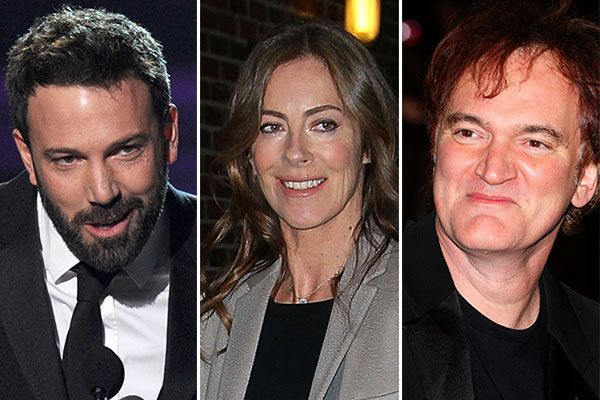 With this year’s Oscar nominees snubs, an atypically cohesive consensus has already formed, at least within the Best Director category: no Quentin Tarantino? No Ben Affleck?! No Kathryn Bigelow?!!

Yesterday, attempting to make sense of the peculiarity of the field, our own Wesley Morris wrote, “[the nominated directors’] movies contain no unresolved moral messes for an audience to wrestle with, unlike, say, Zero Dark Thirty, which has been dogged by the torture question … There are even greater terrors in Django Unchained, but I think the older white men of the directors branch didn’t find Tarantino’s slaughter of slave owners palatable enough to commend him for it … Plus, if Django would have waited six or seven years, he could have just been freed by Lincoln. As for Ben Affleck, I think he’s made directing look too easy for himself.”

But knowing a nation of critics is scratching its heads is small solace for not getting a shot at cuddling up in bed with a shiny new Oscar. So how are our snubbed directors taking it?

Ben Affleck, luckily, had the Critics’ Choice Awards as a platform on which to put the Oscars on blast. After nabbing Best Director for Argo, a seemingly genuinely elated Affleck accepted his award with a nice little “I would like to thank the Academy [pause] I’m kidding, I’m kidding! This is the one that counts.”

Less relevantly, but equally winningly: “I do want to thank the Broadcast Film Critics Association. It actually is very, very cool for me. There was a time where the Ben Affleck Critics’ Award was a ‘Saturday Night Live’ sketch, so this is a very, very cool and exciting thing.”

As for Bigelow, ever classy, she spent her night on Letterman, not taking any shots. Fortunately, others did! As Deadline reports, “Megan Ellison, whose Annapurna Pictures financed the film, demanded a recount and called it ‘So fucked up’ … LA Times critic Kenneth Turan called Bigelow a casualty of ‘the bullying power of the United States Senate and an undeserved loss for Zero Dark Thirty in general and director Kathryn Bigelow in particular.'” And Letterman, toward the end of their interview, puts it succinctly: “Now this movie should win … every single award … a movie can win.”

Meanwhile, QT was in London for a Django premiere, getting all kinds of riled up about the 10,000th person to ask him what he thinks of the connection between movie violence and real-life violence. Skip ahead to 4:30, where Quentin deflects the question in excellently aggro fashion: “I refuse your question. I’m not your slave and you’re not my master. You can’t make me dance to your tune. I’m not a monkey.”

Elsewhere, Benh Zeitlin, a shocker of a nominee for Beasts of the Southern Wild, spent the morning after the announcement “trying to jump back and forth on the bed as many times as possible.” Sorry, Quentin, Kathryn, Ben (with no “h”) — no bed-jumping for you this year.