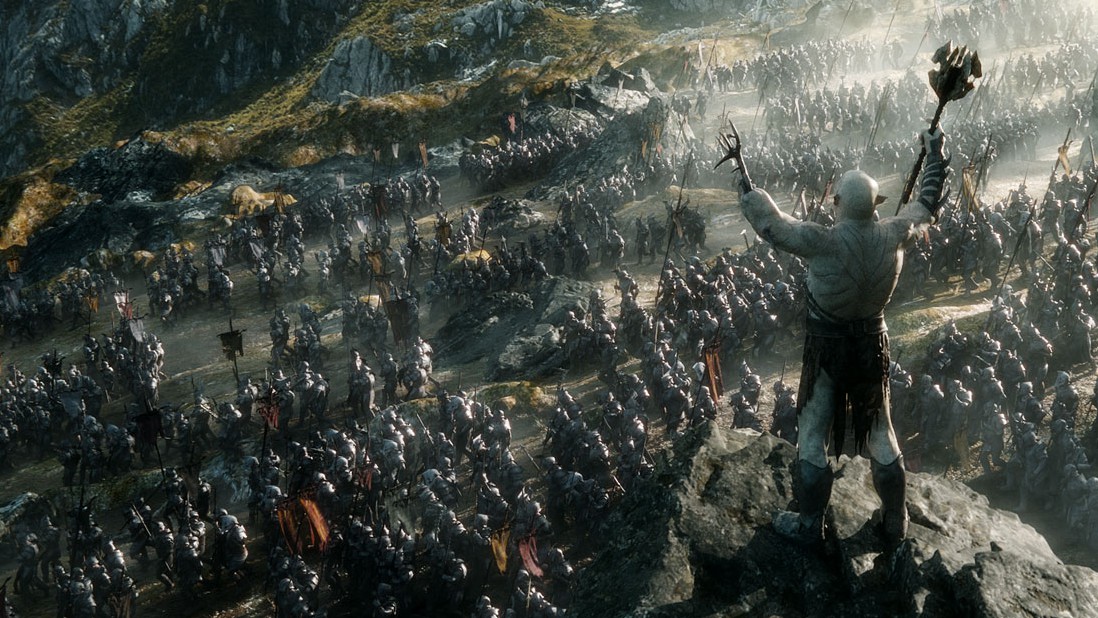 Hollywood may have earned itself a place on the naughty list these past two hack-filled weeks, but that didn’t stop Gandalf Claus and WETA’s army of digital elves from dumping a dragon’s weight in gold on the box office this weekend. Bilbo and the Five Armies led the charge on the multiplex, providing a wallop of blockbuster bang to a year notable mostly for lacking it.  In fact, despite Peter Jackson’s epic sixth trip to the seemingly inexhaustible, profit-spewing well that is J.R.R. Tolkien, the pre-Christmas weekend actually finished down 4 percent compared to last year. And even worse, the domestic box office has now fallen 5 percent short of 2013 with just one weekend to go in 2014: $9.85 billion vs. $10.38 billion.

You know what? Screw it. It’s probably all that bourbon-laced eggnog I’ve been downing, but it’s the holidays, man. Let’s celebrate! Burn the naughty list! Winners all around! After all, The Hobbit made it rain gold — and it looks like maybe Sony will release The Interview after all. So Happy Holidays, Hollywood! Here’s your stocking stuffer from Grantland: the all-winning edition of the Weekend Box Office!

Winner: Squeezing Every Last Drop From Your Franchise

$90 million in five days, $56 million for the weekend, and $355 million worldwide in 12 days. Go ahead, Baggins, drop the mic on your way out. It only took five and a half hours to get to the action-packed finale, but The Hobbit: The Battle of the Five Armies is the undisputed box office champ this weekend, coming in nicely ahead of already high expectations. Considering that its main competition is Joel Edgerton in eyeliner, The Hobbit could end up grossing up to $320 million at the domestic box office when all’s said and done; if The Five Armies keeps pace internationally, we could be looking at this year’s second $1 billion earner. Sure, Bilbo’s little extended-edition travelogue doesn’t quite live up to Frodo’s epic Wagnerian ring cycle, but who’s counting? Stop being such a Scrooge and drink more of that nog with me.

Huh?! Didn’t Sony get its lunch handed to it by North Korea’s army of cyberpunks? And didn’t it fold like a pull-out couch when the aforementioned English-mangling hackers demanded that it yank The Interview from theaters? And didn’t President Obama then kick sand in its eyes on his way out for Christmas by saying it made a mistake? Sure, 95 percent of Hollywood seems to hate Sony right now, and when Steve Carell starts tweeting derisive Rainer Werner Fassbinder references at you, it’s hard to feel like you’re winning. But Annie made $16.3 million at the domestic box office despite getting reviews that would strip paint from your car and being leaked online by Kim Jong-un’s geek squad two weeks ago. That’s $1 million above the pre-release tracking guesstimates! And it’s the hard knock life — why kick an embattled multinational corporation when it’s down?

Loser-Winner: A Slow Night at the Museum

This one’s a little harder to justify. Night at the Museum: Secret of the Tomb fell well short of Fox’s hopeful $23 million estimates, earning only $17.3 million at the domestic box office. That’s a franchise low, and with a hefty $127 million production budget (plus God knows how much more for marketing), Secret of the Tomb will be struggling to keep its head above water over the holidays. But it took second place at the box office! That counts for something. Sort of.

Alas, even I can’t spin the fourth-place finish of Exodus: Gods and Kings. Ridley Scott’s stab at Bible-based filmmaking dropped from the sky like a plague-toad in its second weekend (a 67 percent fall-off), earning just $8 million and leaving it well short of $40 million in domestic grosses after 10 days. And digital disasters don’t come cheap: With The Hobbit sucking up all the costumed-battle-sequence oxygen in the room, Exodus: Gods and Kings will be lucky to hit $65 million domestically before it finds itself exiled from theaters. But if it makes you feel any better, Bat Moses, Chris Rock’s Top Five dropped 49 percent in its second weekend, earning $3.5 million, despite great reviews and an army of cameos.

Let’s go out on some high notes. Big Hero 6 finally passed Wreck-It Ralph with $190.4 million total at the box office: winner! Inherent Vice grossed $147,000 in five theaters, nabbing the best per-theater average of any film in its second week of release: winner! Cannes darling Mr. Turner opened to a respectable $21,800-per-theater average in five theaters: winner! And, powered by Golden Globe nominations, The Imitation Game, Wild, and The Theory of Everything kept running up their totals: winner ($3.2 million), winner ($7.2 million), winner ($19.8 million)!  Hell, Bollywood import PK broke into the top 10 with nearly $3.5 million on 272 theaters, and I don’t even know what that film is! Winner!

So merry Christmas to all, and to all a good night!

Filed Under: Box office, Movies, the hobbit: the battle of the five armies, Night at the Museum: the secret of the tomb, annie, Inherent Vice, exodus: gods and kings